Comfortably Numb will be headed from CT to Fl over the next few months. CN is a well fitted Stevens 47 and there are still berths available, so contact me.

The first leg, CT-Annapolis, is taking palce over Labor Day weekend. It's fully subscribed, but lots more to go after that.

After 11/1 passes the trip resumes

I have learned one thing during our sojourn here in the Pacific Northwest: To always take full advantage of good weather, Or, as the old saying goes – “Make hay while the sun shines”. Anyway, that is my excuse for neglecting my correspondence, my blog, the web site, all internet forums and our video series. Who knew that Northwest Washington would actually have a summer (Of sorts) this year?

I am being a bit facetious, of course, but only a little. In truth, we have been enjoying… Continue

Prepare to Be Boarded

So, the other night, we finished the race. Of course, at this time of year, it's dark by the time it happens - for everyone, not just for us. :) We were about 100 yards from the channel marker for Wormley Creek when a tremendously bright light shines on us from starboard. We're thinking it's some goofy power boat trying to find the channel, and everyone comments on it. Next thing we hear is "This is the United States Coast Guard! Please bring your boat to a stop!"…

How lucky I am to have selected a Hobie 18 for my first boat back in 1980. I went to buy a used sunfish and came home with a state of the art racing machine. It is hard for even me to believe I trailered it home behind my brown VW Super Beetle, then washed it every day for two weeks until I met someone who would show me the difference between the mast and the mainsail. Now, 28 years later I'm campaigning a Lindenberg 28 in a local women's series. 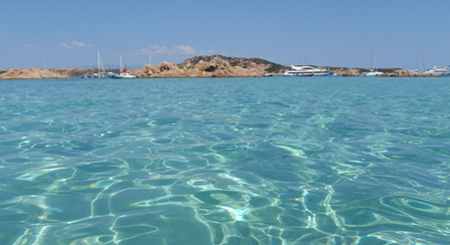 We are finally in Costa Smeralda; the north east coast of the island of Sardinia known for its emerald colored waters. Our plan was to spend our first few days on our own exploring the dozens of beautiful coves in this area. Instead, we fell in love with the very first cove we saw: Cala Coda di Cavallo. 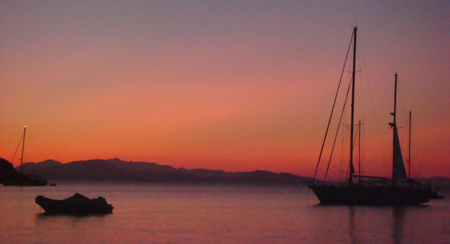 It was not touted as being amongst the prettiest, yet it had it all: clear waters,… Continue

Those of you who know me, know that I'm sailboat addicted. I own 11 sailboats, not counting the Hobie 16 that I cut into pieces yesterday.
Sadly, I never have time to sail any of them except the Columbia 8.7, a heavy keel boat.
Well, today, that changed. I trailered the Aqua Cat 12.5 (12 1/2 foot catamaran) over to Swift Creek Resevoir, and a friend let me use a private ramp to launch. 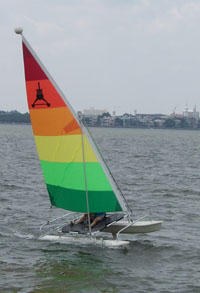 I'm used to sailing in the big boat,… Continue

Bye to Ana and probably to Bill!

Claudette left the party early and caused some major damage in the Florida panhandle and Alabama. Praying for you all.

Looks like Bill is going to cut up the way eastern part of the US, and won't hit land. Ana is now a tropical depression near Jamaica, but won't affect Tourist Town other than some rain as she swirls up on the western side of Florida.

Hope everyone is staying safe and dry. It's getting to be a pretty busy season...at least for now!

This Tuesday started out like most mornings in San Diego with the marine layer hanging above the harbor giving a gray start to the day... but by 11 am the majority of the overcast had burned off and the clear blue San Diego sky shone through!

On this day, I took 5 Couchsurfers out on the boat with myself and Judy. We had crew from Australia, France, and a number of different cities in the United States. The wind was out of the Northeast and it made for a great sail from Fiddler's… Continue

And Claudette joins the party...

However, Claudette is going North up the state of Alabama having originated in the far north eastern Gulf. Projected to hit the panhandle of Florida first. Guess she doesn't want to join the party with Ana and Bill.

Bill's path is putting Florida possibly in its path also. At least this is the storm the weather people are talking up during the weather forecasts. Ana is still predicted to go up the Gulf also, and as stated before, the back bands are due to come up the state. Gusty… Continue

And now it's Bill!

Actually, the way that the NOAA has the storm going in the 5 day cone is projected up the east side of Cuba. Too soon to tell where it will [or may not] hit mainland of the US, depends on how strong the storm becomes.

Ana is of more immediate danger to O Town as the 5 day cone has the storm headed north up the western part of Florida. It looks like we will be the back end ot the bands. This means that we will see a lot of rain come Friday and Saturday of this week.

Yea, we finished our first year together with a 3rd place overall. Indeed we formed a team that is destined to move into first place by the end of our 2nd year. Our original crewmembers Shelly, Sherrie R., Sherry Mac, Susan Jackson (first mate & team captain), and our very own Maryanne have weathered the storms of late starts, tacking with no warnings, spinnaker entanglements, bumping boats, and being boomed in the head. We not only survived we became friends.

Later in the year… Continue

After a really quiet season, the first named Tropical Depression now has a cone of potentially hitting Florida by the weekend.

Sea Owl is ready to go sailing (didn't happen last weekend....long story! LOL). Hubby will be driving over to the marina on Monday to tie down and make sure the Owl is as ready as possible for strong winds and rain. Endless Wind on her trailer will need to be examined as well to make sure she will be all right too.

Drat it! The first… Continue So much for “Destination: Sardinia”, as the last line on our previous blog post stated. That may have been our intention but the charm of Cefalu’s people was too strong a pull for us to leave behind. Once we delayed our departure, the weather window to cross the Tyrrhenian Sea was closed and Sardinia became out of the question for the week. So why did we end up staying as many as five nights on the hook in the same place (clearly a big departure… Continue

August 9, 2009 -- San Diego Log of the Wasserschloss... Today we went for a sail through the harbor and bay of San Diego with Judy, PJ, and myself just for the pure enjoyment of the day and wind arou…

August 9, 2009 -- San Diego
Log of the Wasserschloss...
Today we went for a sail through the harbor and bay of San Diego with Judy, PJ, and myself just for the pure enjoyment of the day and wind around 1300 hours!

The winds were fair out of the northeast making for great sailing from Fiddler's Cove to the Coronado Bridge on a single tack. We averaged about 5 to 6 knots under full sail making way very nicely with little traffic on the water. Crossed under the Coronado Bridge… Continue

After years of helping fellow cruisers with their computers and Wi-Fi questions in the Caribbean I am starting a small business to sell Wi-Fi systems for boats that really work!

Here is my new web site address www.wififorboats.com. Please have a look and if you have suggestions please do not hesitate to make them!

One of my friends saw me testiing a new system in Rodney Bay, St. Lucia. Tito called me and ask me if he could try it. So I took the equipment over to his boat… Continue

Someone recently responded to a kid's complaining that a class was boring by stating, 'boring people are bored.' I understand the premise. On my list of concepts to research is now boredom. Perhaps people just substitute the word boredom for feeling lazy. Boredom seems to imply it is someone else's fault that one is not motivated to do anything, whereas lazy puts the responsibility on one's self. Anyway, my point is someone dear to me recently said they were bored. I refrained from saying, "You… Continue

I sold the daysailor (s/v Perkins Hill) yesterday. She was a great boat for friend and me to learn on (virgin sailors) and still gave me much satisfaction throughout the years. Gradually I had installed a vang and downhaul and ran lines aft, added hiking straps, waxing the hull yearly, painting the dag board and rudder w/ epoxy w/ teflon coating, adding rubber matting to give the dog traction, tweaking her to get more out of her each year. She gave me 10 years of learning and then some. She's… Continue

A Beautiful Morning in Newport RI

It's a beautiful Saturday morniing here in Newport, RI. I hope everyone has a great weekend! I am going to listen to some Jazz at the Jazz Festival and do some boat work installing some new equipment. A new AIS-B transponder, a new SeeMe! active radar reflector, and a mast speaker so my VHF fog signals will work (I never needed THAT in the Caribbean!)

Last weekend here was the Newport Folk Festival and I got to see Pete Seegart (of Peter Paul & Mary), Judy Collins and Joan Biaez!… Continue

It's Done! And, I've passed my Captain's License Exams!

Wooohooo! it's been a long time coming, but i finally did it and passed my Captain's License Exams. I am so glad it's over and I can get on with studying fun stuff!
It was an interesting road there: In order to write an article on the subject, I took both an online course and a classroom course. Now I know which one is best for whom. The article will hopefully appear in Blue Water Sailing Magazine sometime soon. In the meantime, be sure to pick up the August Issue where you can find out… Continue

Well, we are in Grenada and have been here for a week. Yee Haw it is great to know that we don't have to go anywhere for a while. We had some great sailing days down the islands and saw a lot of places that we want to visit after hurricane season passes. Just heard on the cruisers net that the hurricane season has been downgraded again. Although we are now officially out of the box according to our insurance company, we still keep a close eye on the weather in case something develops. That's… Continue

Music is now a member of SeaKnots
Wednesday
Welcome Them!

Robert & Sandy replied to sam's discussion need VIN alternate location urgently in the group Beneteau 40 & 43
"Sam On my 43 the VIN is on one of the hull floors (transverse ribs under the floor boards) adjacent to the stove. The are moulded into the gelcoat. Hope this helps. Regards Bilgolabands"
Oct 17
ADVERTISE ON SEAKNOTS CONTACT US AT:
candrac@sailforwater.com