So much for “Destination: Sardinia”, as the last line on our previous blog post stated. That may have been our intention but the charm of Cefalu’s people was too strong a pull for us to leave behind. Once we delayed our departure, the weather window to cross the Tyrrhenian Sea was closed and Sardinia became out of the question for the week. So why did we end up staying as many as five nights on the hook in the same place (clearly a big departure from our usual pace)? Well, it wasn’t because of our guests, Michael and Daniel. They showed up on time so we picked them up at the Porto Vecchio, right in the heart of town, as planned. They also made it clear that they were flexible with their schedule and willing to tag along wherever we decided to go. 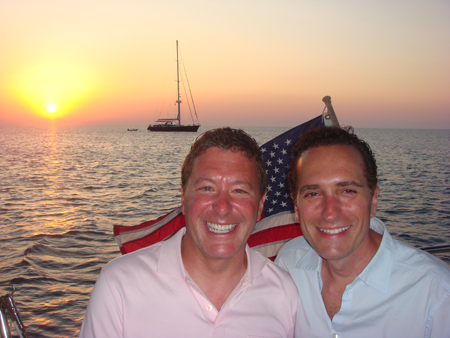 It wasn’t until the next day that our plans changed. First we went to town to provision and introduced them to our new friends, Franco and Giovamaria from the local store that filled up our propane tank. 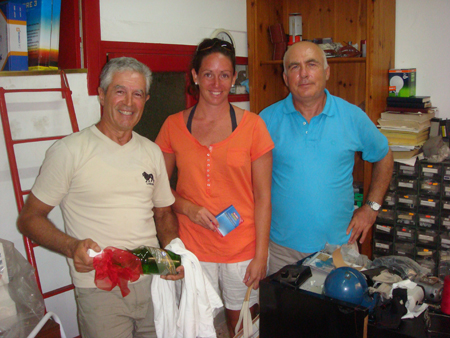 That turned out to be a group effort, since the refill would not have been possible without a critical part that Michael brought us from Connecticut. Big thanks to him and his boat’s captain Jeremy, who had to drive three hours to go pick it up in time for Michael’s flight!

Then we learned we had landed in Cefalu during the most important week of the year, when they celebrate the life of their patron saint, San Salvatore. With that came a whole set of events, including fireworks and a free dinner at the pier made with fresh pasta and local fresh fish. We couldn’t miss that, could we? 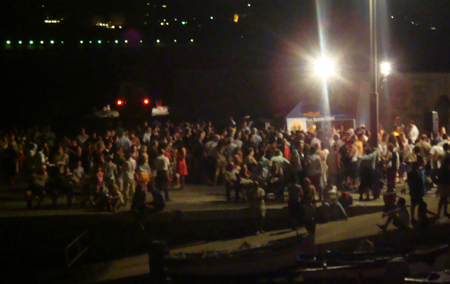 Especially after having been introduced to someone as welcoming as Laura, from Baltimore, married to Carmelo who was born and raised in Cefalu. Laura and Carmelo, together with their daughter Francesca (love the name, of course) have the fortune to spend at least a month a year in this charming little Italian town. So we stayed and let them be our hosts for the festivities. 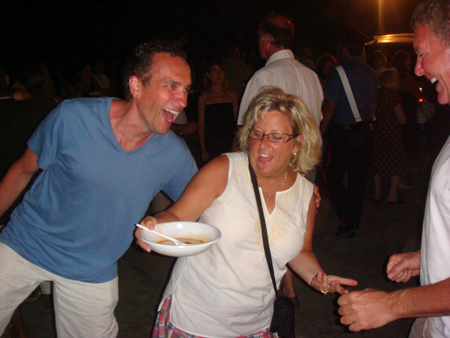 Back to the Aeolians, where we almost lost Can Drac
Despite our delay, the time to say good-bye came much too soon. We may have missed our chance to return to Sardinia right away but the winds were perfect to go back to the Aeolian islands just 50 miles NE of Cefalu. Of course, we didn’t leave empty handed. You just don’t leave the warmth of a Sicilian community without gifts from their own land. Giovamaria surprised us by not accepting payment for the gas refill and by giving us a nice basket full of fruits and vegetables from his own garden. He even threw in some caper seeds so we could grow our own once we settle back on land somewhere. Isn’t that generous? They saw Andrea, with her Sicilian heritage as one of their own and insisted on treating us like family, which really made us feel at home. 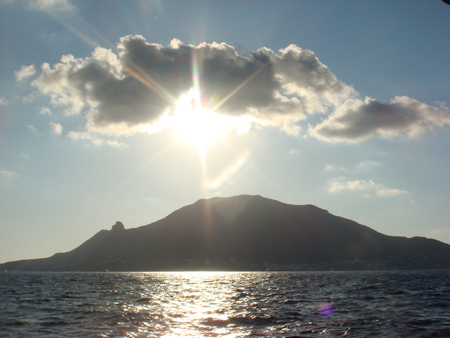 This time, the islands didn’t punish us with as much heat as the first time. Our second visit was actually rewarded with an almost constant breeze and occasional clouds covering the blazing sun. And so we did our volcano tour again, sailing around Stromboli for the benefit of our guests. This time, the volcano with its constant puffs of smoke looked a bit less threatening. That was until we dared to get too close to stop for a swim. 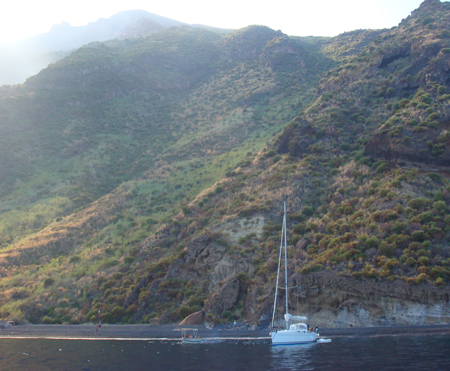 Unlike most other anchorages, these volcanic islands have very steep shores shooting straight down to the depths of the Mediterranean. That makes anchoring tricky as it forces you to get very close shore to get a good hold. Unfazed by the challenge, we simply followed other boats’ example and chose a hole in the line of anchored boats. Well, it didn’t take long to realize why that spot was available. As we approached, we saw the depth abruptly jump from 80 to 13 feet. Then, right there, by our side, we all saw a massive rock in no less than 4 feet of water waiting to meet our keel. With all the power in our engine in reverse and the bow-thruster steering us away, we knew we could only pray that we hadn’t gone too far, too fast. Luckily, Can Drac started to slowly move away just inches before landing on top of the unforgiving edge of the volcano.

It was a close call. And it could have been the end of our trip. But we lived to see another anchorage!

That was also the turning point in our Med travels this season. Just like Antigua was the farthest South we went last winter, Stromboli is the farthest East we’ll go this summer. From now on, we’ll be traveling West. This time towards Barcelona.

Seduced by the delights of local food
When you travel with two gourmets like Michael and Daniel you know your senses are going to be rewarded. They have a talent for finding the way to best enjoy the culinary treats of the land they are visiting. So we got to experience that with them. 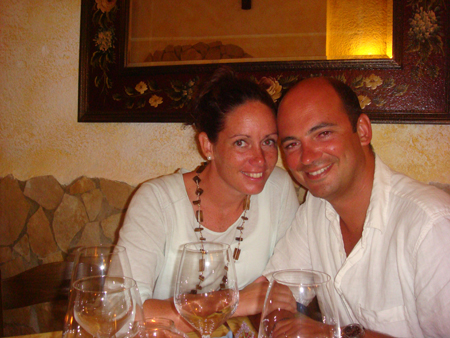 It wasn’t only in restaurants that we tried the most delicious dishes. We also got to shop for food in the most unlikely places, like the trucks that come to the streets of Cefalu directly from the nearby farms with fresh fruit and vegetables. We tried the local meats… 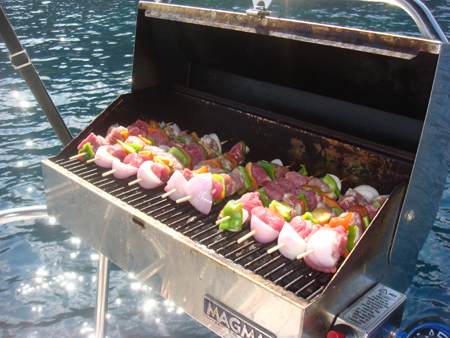 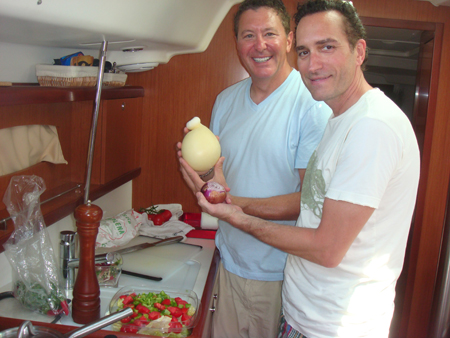 …and adorned even the simplest meals with the treasures of the local markets. 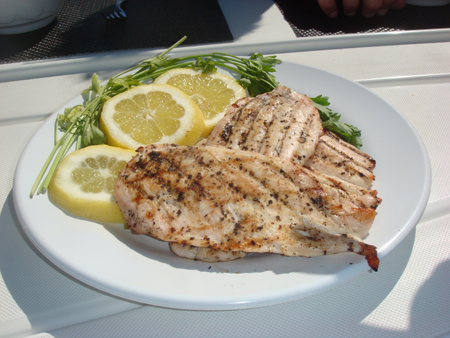 Of course, none of that tastes any good without washing it down with the best wines of the region. Below, you can see us tasting the delicious “vino dulce” we got as a gift from our friends in Barcelona. It may not have been Italian but it sure is Mediterranean and it made for a fabulous dessert wine. This was definitely a week of delightful eating in the best of company.

Comment by George on August 20, 2009 at 1:04pm
Another great adventure to cherish

Comment by PIPE DREAM on August 14, 2009 at 7:29am
Lovely to read your blog. I still have video of the splendid drinks party aboard Cran Drac in Lagos, hope to catch up with you sometime. Gordon/Pipe Dream

Comment by ___/)ances With Sails on August 11, 2009 at 11:24pm
The best of visiting regions of the world is arriving durring their celebral moments....always a delight to encounter the unexpected...Volcanoes visited are also a suspensful sanctuary...know what i mean? Wines tastings! whew! I KNOW what you mean!


Yall are certainly ahead of my game...hope to follow suite soon.