these pictures reflect solitary bird as she was purchased by the previous owner...in 2004. same year i bought my ericson but a few mos later into the year--ericson was june, formosa oct.....she was brought from santa barbara to san diego at once and placed on mooring in coronado, right next door to my ericson, on which i resided at the time-- he would say hi to me as i rescued bird when she broke loose from moorings once long ago----helped him thru some times and he reciprocated--now i own his… Continue

Advice/Experience/Suggestions for Bareboat Charter in the San Juan Islands

We are looking into a sailing vacation in the San Juan Islands this summer, and I would really appreciate any and all feedback, information, pros & cons, experience you've had with the charter companies, sailing in the area, good anchorages, weather and temps in June vs. summer prime season, etc. .... anything ;)
Thanks.

reliving the past with the mouse.

I'm sitting here to bad out to do anything outside. Reading blogs from other sailors and thinking back to when I was on the water 8-12 hours a day 5,6 & 7 days a week.Those were great days. I worked in what I thought was the best group on the water at Disney. We carried folks from Dixie Landing (now Port Orleans Riverside) to downtown Disney on what Disney called the Sassagoula river. 2.5 miles of winding river through the woods under 3 bridges and across the lake at Downtown. What a… Continue

Back to blogging after a major break

O Town is getting cold this week, but this past week was the reason why we call Florida the BEST SAILING STATE in the United States. While the rest of the country was under major cold with many areas under snow and ice Floridians were wearing short sleeves last week in 75 degree weather.

Walt Disney knew what he was doing when he put Mickey Mouse Land here. For Christmas, they make snow here. Thank God that's for the tourists. :)

So sailing on the Intercoastal this weekend… Continue

Well, if I'm going to have a blog I guess this is the place for it. Mainly at this point in my life Sailing and computers are 1 & 2 in my life with possible Motorized coastal cruising 3rd. If I sound melancholy I'm really not. I have a great wife, nice house, 2 dogs, 2 cats, a good church in which I'm very involved. I guess my only problem is lack of money for boat stuff. I can always find things to do to my boat, just not always the cash to do them. But who knows when that will change.… Continue

So my sailing club, Texas Mariner's Cruising Association ( http://tmca.nu) held their annual planning meeting yesterday. It was quite a different experience planning an entire year's worth of weekends versus the short 6 month season in the north. Being that it is the "off" season down south where the weather is much cooler, but not freezing, I can understand why people will go out every chance they get.

Normally, being a hard core sailor, I'm always down with that, but a short 6… Continue

The time is rapidly approaching. Sharon and I have been preparing to bring our boat home from the BVI. "Great Adventure" has been in charter service and is about to complete the Moorings phase out service. We plan to sail her from Tortola to St Thomas the first day and spend a couple of days there outfitting and picking up supplies. Then the plan, weather permitting is to sail to the Caymen Islands and stop there for a day of re-supply and weather updating. If the weather looks right for a Gulf… Continue

Much attention has been focused on survival as a castaway both in movies and reality shows lately. Having had a recent experience regarding this subject, I can tell you that movies and reality shows fail to convey the array of emotions that are very much an important part of the castaway experience. Folks sitting in their living rooms in front of their TV sets or in a theater munching popcorn and guzzling soft drinks don’t experience the isolation, helplessness,… Continue

In a boat's own words: I Want to go South now! 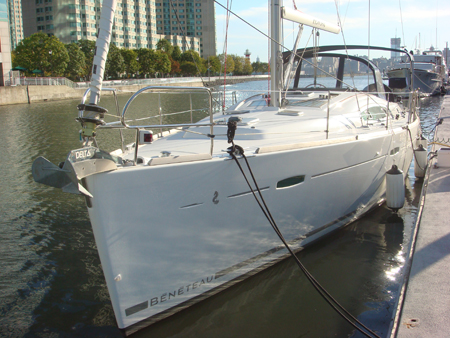 Hello. My name is Can Drac and I was born in March of 2008 measuring 43 feet 2 inches and weighing 19,566 pounds. Since then, I haven’t grown much but I have definitely gained quite a few pounds, mostly in equipment and gear for the voyage of a lifetime. A voyage that, unless I do something fast may never even happen.

I am writing this as I freeze my keel off in my slip in the New York Harbor. Franc and Andrea, my owners, already left… Continue