I am currently taking my Day Skipper theory, soon to be followed by the practical element too. I don't have much practical experience with sail, as we always had power when I was growing up. I'm looking for the opportunity to join a crew near the Poole/Bournemouth area for evenings / weekend sailing, to gain some valuable experience and enjoy some water time!

If anyone has a boat, or knows anyone that is looking for additional crew, I'm 28, fit and healthy, jolly nice chap, and pick… Continue

End of May seems to be when the weather in London has defrosted enough for me to get out onto/into the water. Because I am in London with no coast closer than an hours train ride, I decided to do dinghy sailing to improve my core sailing, my wind awareness and get a feel for how a boat handles when it is very reactive.

I joined the London Corinthian Sailing Club. A magical yacht/dinghy/rowing club on the river Thames, close to Hammersmith bridge. It is the perfect inner city…

We're in the process of changing the lexan windows on our boat. Probably doesn't warrant a blog, but I feel the need to vent, since, like every other chore on a boat, this one's taking five times longer and is way harder than planned. First we made templates out of bristol board, took them to the Plastic Shop, and they did a great job of cutting new ones. The old ones, which we also put in ourselves twelve years ago, have become too milky to see through. They were laid onto a… Continue

BoatU.S. did a round up of colleges that offer programs that can lead to a career on or around the water. It's unique as far as I know. If you've got high schoolers who are thinking about their future and whether or not boats should be a part of it, they should check it out. Here's the link.
http://www.nxtbook.com/nxtbooks/boatus/200907/#/42

Now, who would have guessed that Sammy and I would be having lunch, acting like Sherry in a wi-fi cafe, and taking a deep breath in hopes of crossing the Chesapeake in two days; probably 3 the rate I'm going. :-) Lots of time to conjure up good ideas. Truly, sailing brings out the best in me, as well as reminds me of my weaknesses. Such is life. Love to all. 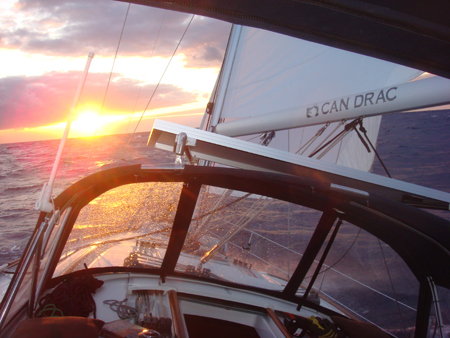 After our first long offshore passage (Tortola to Bermuda) we finally faced the crossing of the Atlantic ocean on the morning of May 20. Coincidentally, Aunt Carol, Uncle Joe and not-so-little Joey were visiting Bermuda on a cruise ship and thanks to Bermudian (and Sailforwater.com sponsor) Joanne Kippax we were not alone that day. She had the courtesy to pick them up in Hamilton and drive them all the way to our dock to see us off on the Big… Continue


Most one man-overboard drills usually consist of throwing over a cushion and returningto pick it up by the strap. A good sized fireplace log is a better way to do the practice because it is much more awkward to get aboard.

Andres and the Owl

So, there is a tropical depression/storm out there...but it's in the Pacific. As I have stated before, Fl tends to get the hurricanes later in the season. Radio weather people this morning only pointed out that there was a storm in the Pacific and if was named, the name would be Andres. There you go!

We have acquired our NEW SAILBOAT!! A 27 foot Watkins. A boat of OUR DREAMS!!! It was just like having Christmas in June! The hubby and I stayed up half the night… Continue

Who would a thunk?

So, here I am with my pup, My Lady (aka Sammy) in South Harbor Marina just shy of the Cape Fear River which I expect to transit tomorrow. Apparently there was a movie about it and it is probably a good thing I didn't see it. Although the name certainly conjures up a bit of anticipatory anxiety. Anyway I met up with two other cruisers today, Walkabout and Starboard Tacker II. We had an interesting change of positions throughout the day, with My Lady and I lagging when we took break at a pretty… Continue

In The Virgin Islands

Hello Everyone :o)
I can't believe that it has been so long since I added a post to this blog. We are in the Virgin Islands! Yes we crossed the Mona Passage and spent time in Puerto Rico and now we are at St. Thomas. It is great to have the Mona in our rear view mirror. Our last big passage will be from Virgin Gorda to St. Martin and then it is south to Grenada for the Summer and Fall. We are enjoying St. Thomas and we had a good time in Ponce, Puerto Rico. Our sail from Ponce to St.… Continue

Ariel went into the water on June 5, neither late nor early according to our past performance. We stored mast-down this winter since we added roller furlers to the jib and staysail. We bought Spin-Tec at the Strictly Sail Boat Show in Chicago; they are known for their simplicity, and rugged durability. I'm still in shock: I never thought I would install roller furling on my boat. The ability to make or hand sail without having to venture onto the foredeck has become increasingly important to… Continue

June 5th 2009, Shilshole Bay:
The weather has been pretty nice the past week or so; almost like Hawaii in the dead of winter. But today we appear to be back to normal – cloudy, cool and wet. A good thing, I judge, as most of the locals have been complaining about the heat (Mid-80’s maximum) and attributing it to Global Warming, or as I prefer to call it – “Spring”.
Laura has been working far too many hours and attracting the wrong kind of attention from upper management – the kind of… Continue

recognize Phil and Zeehag? His boat? They are great… Continue

Finally made it to Lower Alabama...and we want to do more of that and beyond!

Great trip. Especially for newbies. Looking forward to a more extensive trip. Might even start night sailing like Phil talks about.

Look on our blog for slideshow and the upcoming posts detailing the trip. Gina

One of the ways you know that the season has "arrived" in the O Town is that the weathermen sign off on the local radio stations with a status report as to whether there are any tropical storms around. Goody! It's been pretty calm out there according to their predictions.

Weather now is rain most days during rush hour. We are getting our lush green look back after our first quarter burning drought. And of course, we are still under water restrictions [which will last probably… Continue

I have about 3 years experience from my local yachclub as a crew on other peoples boat. I am looking to buy my first boat for the Great Lakes and have narrowed it down to a Cape Dory 25D and the Pacific Seacraft Flicka. I have looked at everything from Bristol 24, to a Bristol 29.9 to a Hunters, Freedoms, C & C's , O'Day's Catalina's on and On and ON.

I am going to mostly day-sail with an occasional overnight and/or weekend trip. Which is the better boat, I can't decide!!!

Yea, I made it to St. Augustine on the ICW unscathed, relaxed and happy. There is internet at the St. Augustine Municipal Marina but I keep getting bumped off. Had a nice serendiptious experience when I picked up my friend Sandi (c-shore) at the Halifax Sailing Center in Daytona. So I'm going to be short with my writing. I will head for Jax in the morning and hope to cross in to Georgia in a few days. Me and my dog,,,,,,My friend Sandi (c-shore) heads home tomorrow morning. It was nice having… Continue

Second set of lessons on the way

Well, I just signed up for the next set of classes, ASA 105, 106. These deal with advanced coastal navagation and we will make a passage from Ft. Lauderdale, FL to Bimini in the Bahamas. I will be doing these classes by myself, as my Dad said he has learned enough and I can show him anything else he needs to learn. I will admit, 4 courses with 4 exams in 5 days was almost too much. He has had enough of classes and I am very proud of him. He did not get sick and he studied like a trooper.… Continue