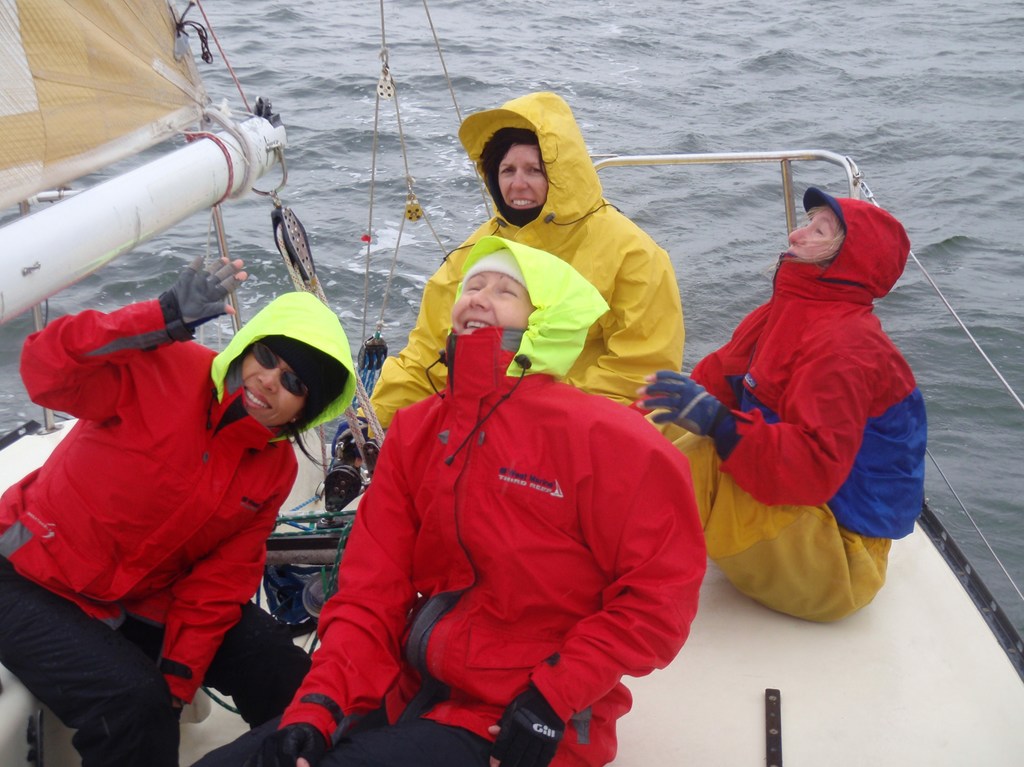 A letter to my Courageous Crew

While sailing in the drizzly rain today a conversation started about fear and how it holds us back. I said one of my approaches to bringing our team to the winner’s circle…

Hi there folks, We are getting ready to get across to the UK to pick up Freedom, and do her sea trials and check her out and all the work that we have had done. One of the main jobs was to restore her teak decks. They are looking gorgeous. What advice from anybody on how to keep them up to condition, and in particular when we have to leave her in the UK and winter her for 6 months thereabouts? Thanks in advance, hear from you soon. Cheers for now. Susie.

We have begun to take our trip planning and preparation seriously now. I rode my bike to The Armchair Sailor on Westlake in Seattle and picked up the NOAA Catalog of Charts and Publications #3 – Alaska and the Canadian Nautical Charts and Publications Catalog #2 – West Coast. We need charts of SE Alaska of course, and all the other periodically updated publications relating to navigation. It was… Continue

Hats off (can't afford a prize just yet) to Steve Austin for his great money making scheme. Just as soon as I buy the truck I'm off to Mexico. On my return from Canada I'll drop off a prize horse at your boat dock.

I'm not sure if others can follow a reply to one's blog post. If not let me know and I'll challenge myself to figuring it out. .

Great sense of humor Steve, I love it.....Thankfully Wally mart is open all night so I can go buy that must needed shovel.

Yea, it is too bad I don't have any cheese in the house. Well, I do have some hard parmesan but who eats plain parmesan?. Guess I could heat up some spinach and sprinkle some fresh grated parm to enjoy a healthy treat. Unfortunately, I don't have an appetite. Seems like I have some kind of no energy bug that kept me on the couch all day. I couldn't even garner the strength to get dressed for work. Perhaps it is time that my 100% attendance at work ethic meanders down the path of I don't… 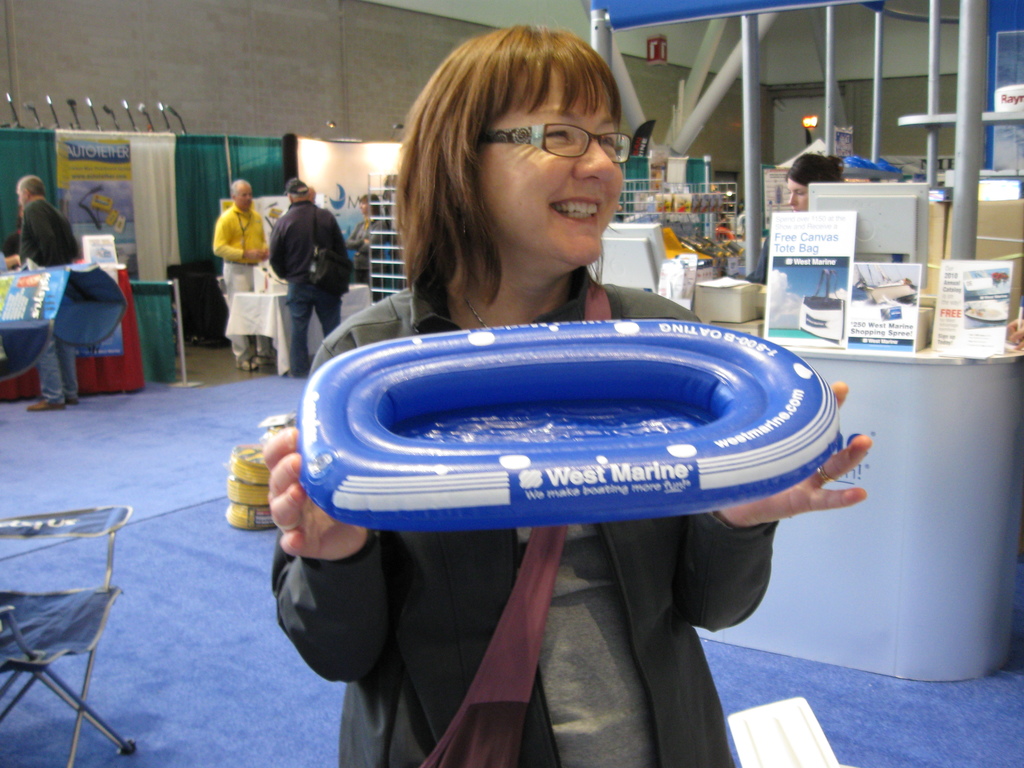 We went down on the w/e to Boston to attend the New England Boat show. Sadly, it's nothing like it used to be, about 1/3 of the size and of course, power boats rule!! It was still nice for us to get to the coast and at least dream of the summer that is to come (there were motorcycles on the street that w/e - brrrh).

We came down tho' mainly to look at some sailboats we'd seen online. We found "the one" in… Continue

Hey y'all, thought you might get a kick out of this.

I Love My Job

This is even funnier when you realize it's real!
The next time you have a bad day at work... think of
this guy.

Rob is a commercial saturation diver for Global
Divers in Louisiana.
He performs underwater repairs on offshore drilling
rigs.

Below is an E-mail he sent to his sister.

First slut clothes, and now Newt Gingrich! If this is targeted advertising, somebody should ask for their money back

. A figurehead in the form of a naked woman, perched on the bow, calms the sea and her open eyes will guide it to safety .A naked woman on board was thought to be good luck. (guess they were hoping to get lucky)
This is the reason for naked figureheads. (on Bowsprit)

2. Swallows seen at sea are a good sign, as are dolphins swimming with the ship.

3. Tattoos and piercing are said to ward off evil spirits
for sailors to wear gold hoop earrings was…

Thank you for invitation

Thanks for the invite to the Ocean Cruising Club. Phil and I hope to be on the ocean by November. I look forward to networking and getting tips on cruising while we work towards fulfilling our dream this fall. If we can sell the house by this spring, we hope to live on the boat during the summer, so that I can save the mortgage costs to the cruising kitty.

I have my own blog: Changesgoingsouth - but don't know if it's ok to post the link so will wait until I heard from… Continue

Are you planing to Haul and/or have any kind of work done in Chuagaramas / Trinidad ?
Well, by all means, please feel free to contact me about these lovely place.
I got held back for 6 weeks, overcharged,rip off, Creditcard Fraud, and all for alsolut substandard work.
Quit a few of them actually dangerous.
Made it to Antigua and will spent about a month here to repair the "Repairs" from T&T.
To be fair ,3 Companies where helpfull,on time and fair...
Kiss… Continue

went by and checked on boat today at the yard. Got most of the mast work done now and waiting on the yard to paint hull and deck.

New harken mk4 will be in thursday so i can start making the new forestay.

Taking our time getting underway...

We are taking our time getting underway. Jill has an appointment during last week of this month and frankly the weather has been to blooming cold for us to consider leaving until a few more degrees are posted on the… Continue

Fully provisioned, the time had finally come to commence our journey. Now, there are moments in one's life that are undeniably significant and profound; graduating from college; wedding day; the birth of one's children. All well and good if you like that sort of thing. For me, it was the first starting of my diesel engine. Never being certain when one steps aboard a boat if anything is going to work, I was wildly ecstatic when I pressed the ignition and…

It has been awhile...

I have not been on SeaKnots for many months... I have a nautical season and a landbased season. We are readying Shibumi for launch in March so this is the begining of our first nautical season for 2010. I say the first nautical season of the year because we intend to cruise for merely a month this time, but depart again in November for a four to five month voyage to the Exumas, Eleuthera, and the Abacos. I will try to update our blog with photos as we go.…
Continue

I guess that one must expect problems when one's engine is 26 years old. But it doesn't make you any happier when it happens:

A couple of lessons learned while actually cruising.....

Cruising down the Florida intercoastal during the first week of December was extremely COOL! I had never been on an actual sail for several days. It met all my expectations and more. What a wonderful vacation! And I got to be the captain because the hubby couldn't make it. What a lot of responsibility!

I learned several lessons from the great voyage. One of them is that when you take a tool, or really, anything, from its place it is really for the best if you return the… Continue

Step one, ready to buy as soon as I find what I want:

What I want is an ocean going multihull in the 35 foot range. As an experienced skipper of a Corsair F28, I have an idea of what to expect. Weighing the pros and cons of a tri versus a cat are on my agenda as is comfort versus speed. Typically, I favor speed over comfort but because my next boat needs to take me around the world via the Panama Canal and more temperate climates, being seaworthy and user friendly for single handing… Continue