While SPRAY rests quietly on the mooring in Vero... 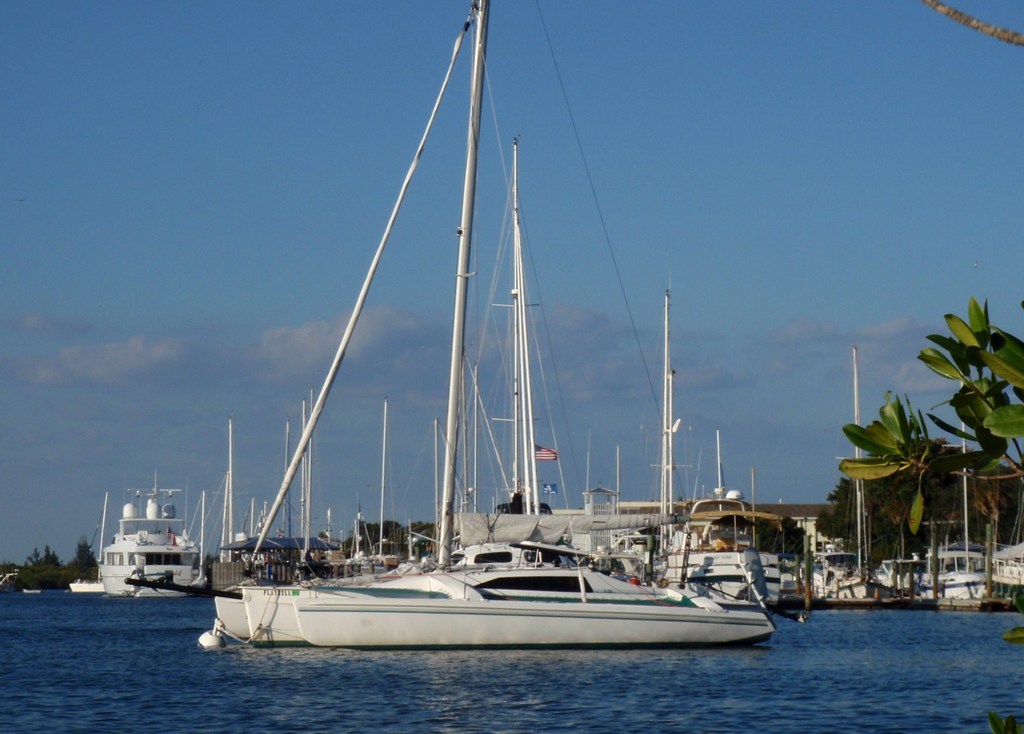 Tomorrow I meet with my financial advisor. By the end of our meeting I will know what my boat buying budget will be for my solo circumnavigation. While my beer budget will realistically be close to $75,000 at the top end, my champagne taste will yield a Dragonfly 1200. Sometime between now and my 1 pm meeting tomorrow I promise to buy a Florida lotto ticket.

In the meantime, I seriously request suggestions for boats in the 30 foot range. A trimaran is my #1 choice. If I have to…

Getting to the Point

I am seeking a multihull capable of crossing oceans. Preference is for a tri but will consider a cat: 30 foot range, for under $100,000. Good luck you say, I say all I need is to be in the right place at the right time

Also, suggestions sought for taking a course in celestial navigation. Thanks,

I need to do a test to remember how to get to the page that my guests view.

Back at the helm

Back at the helm of my Corsair F28 I feel comfortable and confident. She's a fine boat with user friendly self tailing winches, comfortable layout, and speed to get you where you want to go. Her only lacking is her ability to cross the oceans. Out beyond the sight of land, on a passage from Ft. Pierce, Florida to Cape Town. Then around South Africa up through the Madagascar Strait and onward north toward the equatorial islands that scatter throughout the Pacific. Northern Australia, then a…

Jealousy, that eenie, meanie, green monster that invades my soul at the sight of certain individuals, consumes way too much energy. As a practicing counselor for 30 years I know that jealousy is simply an emotional response to my own insecurity. It is my belief that I am not good enough coupled with the delusion that someone else is better than me. Simple solutions are to ignore those I am jealous of, reinforce my own knowledge and skill, or just hold my head up high and pretend to be…

It is time stop doing the same thing over and over while expecting different results. After two years of seeking and training new crew I have changed tactics. Earlier tonight I already spoke to my most dedicated, loyal and fun crew about a change in venue. One of the changes I will announce on Wednesday evening. The other change has to do with recruitment.

Race recruits and current crew, including myself will have to meet three crieteria: (a) a be physically fit or be making…

I get up this morning to read my e-mails and am immediately angered by someone misinterpretting something that was said. Admittedly I argued with myself as to whether I am splitting hairs or dealing with semantics. Either way, with my feathers ruffled, I wrote several seething e-mails, then deleted them when I realized I wasted my swimming hour steaming over trivial matters.

Being the glutten for punishment that I am, I read another e-mail. This one enthralled me. It was from…

In my last post I lamented about the challenges of selecting compatable crew. Having had three team members seek greener pastures, I was torn between frustration and disappointment. The disappointment arose when I questioned for a moment the consequences of my behavior which led to a divorce from a trio I had come to care about. The frustration was facing the challenge of seeking replacements. Fortunately, finding replacements was easier than I thought. Wtihin an hour any sadness I felt was…

How many times have you been so mad at someone that you swore you would never sail with them again? If you've sailed with half as many people as I have then you know what I am talking about. Although there is one man who I believe I will never sail with again. Sorry folks but his idea dwelled on the disgusting side. Other than that there are probably a handful who I would prefer not to sail with and certainly do not encourage our sailing together.

Then, there are those select…

You probably have all heard the time analogy that goes something like this: when counting down to the start of an olympic race, five seconds can seem like an eternity; when you are 5 years old your birthday takes a lifetime to arrive. When you are in your sixties, holidays come around quickly. Similarly, I have learned eight weeks of vacation goes a whole lot faster than eight weeks at the office. Not that I am complaining rather I am just feeling like my summer at home is whizzing by. No…

What a great night for TV. Today I received my VANS one of a kind sneakers with Abbey Sunderland's date arriving in Cape Town (a place dear to my heart, having been there). Now, in about two minutes 20/20 is hosting a show on things kids are doing. One is some kid climbing a big mountain and another is Abbey. Gotta go get inspired. I may not be the youngest, so maybe I'll be the oldest lady getting around.

Isn't it funny how once you learn something it becomes integrated into your life? Just a few days ago I became acqainted with the text message phrase "OMG." As luck would have I proceeded to lose $800 in cash that was contained in one of those little bank envelopes along with my driver's license and ATM card. Having just left the bank enroute to register SPRAY, then pay a friend for the work he did on her, I felt good that I had the money to pay off these little ditties..

Ever been told to wear shoes at the boat ramp? Ever not listen to what you are told? Ever have a sail mate think they know better?

So it was on Friday, May 14 when one of my crew and aspiring small boat racers decided to take her shoes off before getting out of her boat at the ramp. Seems she forgot she was told to wear shoes. Seems she also was clueless about the danger that lurks in the nasty, broken glass, oyster shelled, moss covered slippery ramp waters where we launch…

AIS , Word Press, and Getting Along with Others

Just did some research on AIS. Like learning to sail, AIS has a language of its own. There is static and dynamic transmission. Does that mean fuzzy sounding versus a really terrific communication?

How about Furuno and Raymarine? Is Furuno related to King Furuk? Recently one was criticized for calling an autopilot an autopilot and not a Raymarine. Does that mean AIS will steer me away from danger? Here I am confused again. I was grazing my blog profile and other pages I am not always sure how I navigate to. None the less, a pop up box asked if I wanted to share my blog post on Face Book. Though I have two Face Book accounts, one under my name and the other under a boat I race (Fast Lane), neither are up to date. Regardless, I typed up a little message/story about my current situation, thoughts, and feelings, forgot to save it, and hit…

Been silent too long

Can you believe my blog has been silent for two months? Where has the time gone? I know my job consumes 8 - 10 hours a day and I have sailed every Saturday and Sunday except one, but golly, gee whil a kers, the days are flying by.

To catch up we have a monohull practice scheduled for this Thursday night. Safey will be reviewed with a man overboard drill the priority. Without a chase boat, however, we will just use a throwable cushion or boat fender. Someone else suggested we…

I get so much encouragement from my sea knots blog friends. Thank you.

Now that the International Sunfish Masters Regatta is over I have several thoughts. First, it is true that we become what we focus on. Second, perseverance is my strength. Third, I will win a major event. Perhaps it is a bit narcissist but I believe with proper training and positive reinforcement my dreams will come true.

The night before the regatta I feared being left behind at the start of the 56 boat fleet. This fear became a reality in all 4 our of 7 heats. The worst was…

Wow, as if being a master sailor wasn't enough, I learned that indeed, I am a great grand master sunfisher. All I needed to do was age 60 years and the title befell me. To be a senior I have to wait another 8 years, and to be a grand master I would have to regress biologically. That's what i really want. I want to turn back the clock. I want the wrinkles on my face to soothe themself back into the creamy soft sensual feeling of my youth. Though in my younger years I never even considered…