This is the first time I have been alone on SPRAY during gusts up to a lot of knots per hour. Like a never ending puff, I just timed the last gust at about 20 seconds.

What is peculiar is that every night on the port side I hear a scraping noise. Sounds like sawing. I just checked and don't see anilines or other objects scraping. What could it be. A stupid mouse ran inside the boat a few days ago, but there are no droppings or evidence he got…

Wow, I am back on track with the blog chronology. One of these days I will get a hard copy printed in case the sea knots god decides to stop sponsoring this wonderful site. After a great week of actually sailing to neat places I am back in a shipyard. The good thing is in the early evening I take the time to appreciate what I have in life.

Mostly, I have family, friends, and acquaintances. Family represents those who I am…

You can read about Hog Sty Reef on Wikipedia.

Somewhere east of the Ragged Islands, west of Caicos and south of Acklin is a several mile reef forming a circle around deep water. This ship is one of two ships that got stuck on the reef. It was well worth sailing into the atoll. I anchored in 25 feet. This was as close to the wreck as I ventured. I was too lazy to untie the dink knowing I had another 75 mile passage after leaving the reef.…

As if the Bahama Bank isn't beautiful enough to take your breath away, wait until you sail across the Caicos Bank. With the absence of wind the ocean is crystal clear. Having to motor most of the way along this 75 mile passage, it was a pleasure to drift along. My arrival at an anchorage sheltered from the slightly southeastern breeze came after 30 hours of  sail. To be more accurate SPRAY lives up to her constant reminder by my Everglades City friend that she is a…

Is This Cool or What

Here I am drifting along at 3.5 knots, wing on wing, with a dissipating patch of darkened clouds off to starboard while blogging. The clouds are dispelling some moisture but are not bringing any wind. I am just so excited to have internet a few miles from the shore line. It looks like internet will be my biggest daily expense. It is just my need to talk, or write when there is no one near to engage in conversation.

After a pleasant beam to broad reach from Georgetown to Thompson Bay on Long Island (Bahamas), I am off at first light for the Jumentos. I heard they are a beautiful series of cays running south from the Exumas. Every time I have ventured further into uncharted harbors I cringe with excitement. It is a bit scary. Thankfully, I have a buddy boat which is also a trimaran called TRIAD. The skipper has a married couple on board so the four of us have had our share of  laughter, provisioning, and…

On the Road Again

Yippeeeeeeeee, The Garmin 740s charts of the Caribbean arrived today. It only took 3 weeks and four days. Tomorrow morning I hope to trade a Danforth 20 pound anchor and about 100 feet of chain for some worthy product. Money would be nice, but paying forward is a good enough deed that will lighten my load.

I gave away two big bags of clothes this morning and am left with 4 bags of items I am having a sentimental attachment to. Most of the items are t-shirts. There are a few blouses…

Tired of keeping two sets of days, I soul searched and logically concluded that I began solo sailing the day I left the dock on DuPont Island. That was January 15, 2014, fifty days ago. To commemorate the occasion I changed the fuel filter.

All by myself, after hearing many renditions of how it is to be done, what tools I would need and one echoing reminder. "Mechanical work is not rocket science. It is about turning nuts and bolts, and being smarter than them." I organized the…

My friend and #1 sailing mate, Maryanne, sent me a picture of his poignant poster. Thought it is worth sharing to all those other solo sailors, especially the ladies who take the helm and dare to explore their desires. 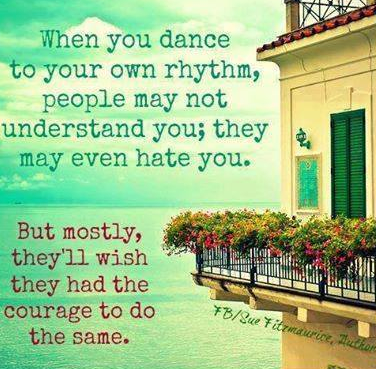 During my mom's last days she told me how her life seemed to have taken place all in one day. It is when we look to the future that time takes forever. "When you look back," she warned, "all the good you experienced will glide by like a slow paced movie." We talked about whether the memories were happy or sad. In one of the rarest moments spent with my mom, she told me that especially the saddest days of our lives is what allows us to enjoy happiness. With her words I have come to realize If…