Raising of the Mast 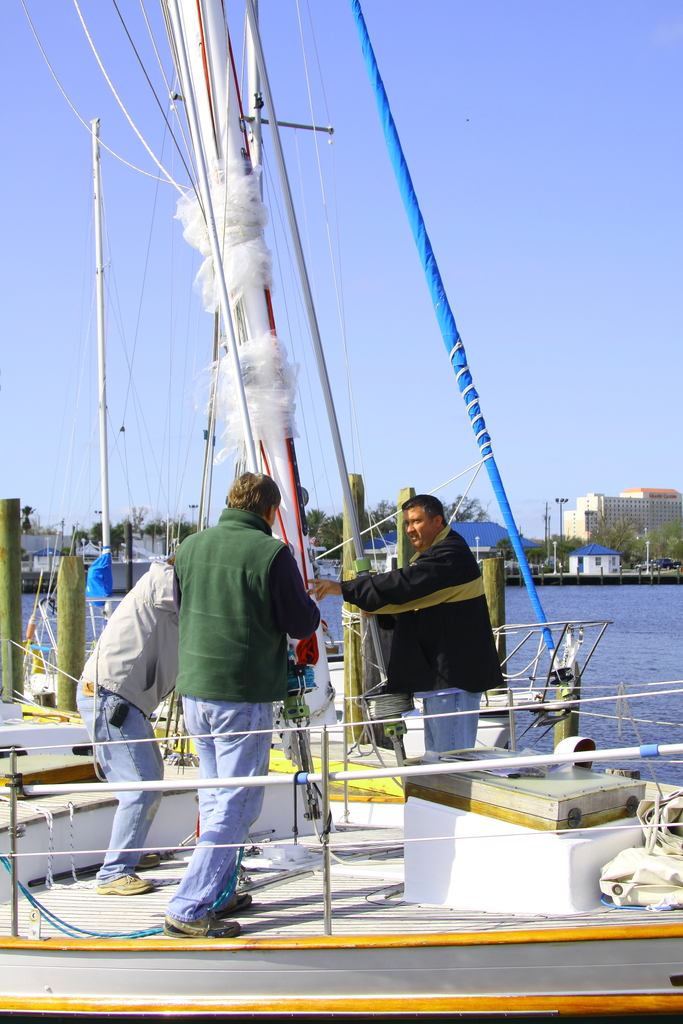 well, sometimes it is really great when a plan comes together, that does not mean that you might have a couple of sleepless nights in the process. But, S/V Anna Lynn now has a new main mast, can't wait to get her underway over Easter weekend for sea trials....… 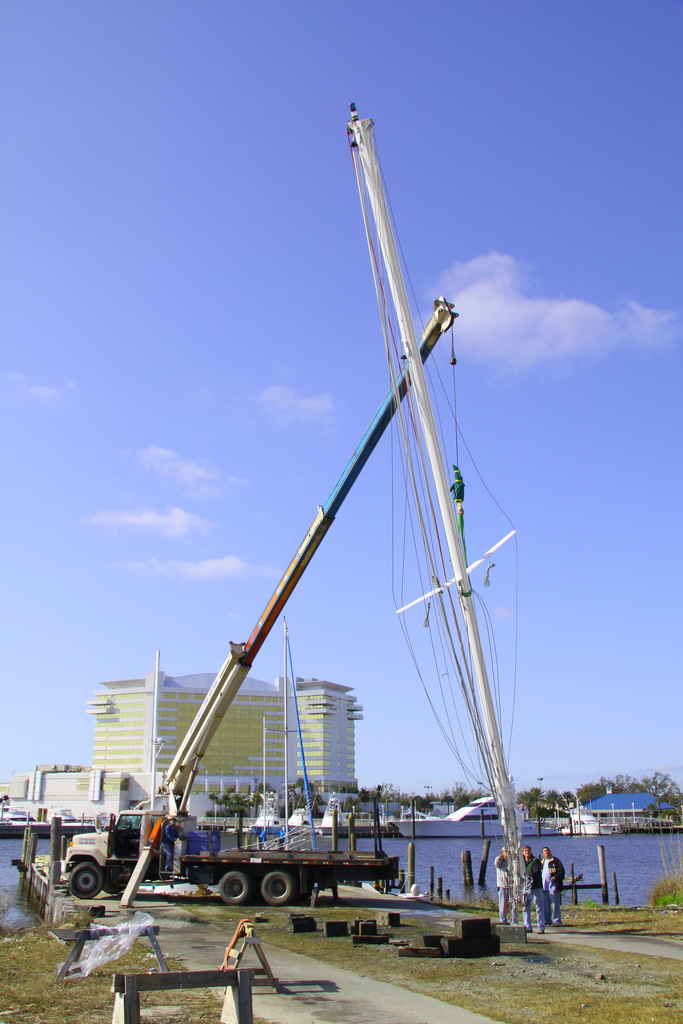 AND YOU COULD HAVE THREE OTHER PEOPLE FOR COMPANY BESIDES YOUR SIGNIFICANT OTHER, WHO WOULD YOU CHOOSE?? I'LL HAVE TO PONDER THIS FOR A WHILE.

Since joining Seaknots I've found that the one thing soon to be cruisers need to do is downsize....a lot. There is something cleansing when one purges stuff. I've found this to be true with each move I make. Downsizing from a 6000 sq. ft. house to an eight room to a 4 room. But as a former antique dealer I like nice things and it's not always easy to get rid of stuff, nor do I really want to. Then there's clothes, books and shoes...the list goes on. There currently is a trend started I think…

She had never solo sailed before! Awesome video, about 54 minutes long. She had done it once before with 17 crew.... yeah, that would be doable, 6 crew....maybe, 4 crew..you'd have to really talk me into it..right boat, skipper..possibly could be convinced. Solo... forget about it! Enjoy !!!!!

I get so much encouragement from my sea knots blog friends. Thank you.

Waiting for a tow from Captain Wendell and his Vessel Assist boat.

We hauled out on Tuesday after pulling the engine and delivering it to the
Yanmar Mechanic. I will spare you the gory details but the upshot is
that the engine has been disassembled and sent off to the machine shop
and will be finished in about ten days.… Continue

Now that the International Sunfish Masters Regatta is over I have several thoughts. First, it is true that we become what we focus on. Second, perseverance is my strength. Third, I will win a major event. Perhaps it is a bit narcissist but I believe with proper training and positive reinforcement my dreams will come true.

The night before the regatta I feared being left behind at the start of the 56 boat fleet. This fear became a reality in all 4 our of 7 heats. The worst was…

Where to find us

We keep only one blog active. It is located at:
sailblogs.com/member/tenderspirit/
We work hard on keeping it current and we also periodically update new photo albums.
Thanks for visiting us there!

Wow, as if being a master sailor wasn't enough, I learned that indeed, I am a great grand master sunfisher. All I needed to do was age 60 years and the title befell me. To be a senior I have to wait another 8 years, and to be a grand master I would have to regress biologically. That's what i really want. I want to turn back the clock. I want the wrinkles on my face to soothe themself back into the creamy soft sensual feeling of my youth. Though in my younger years I never even considered… 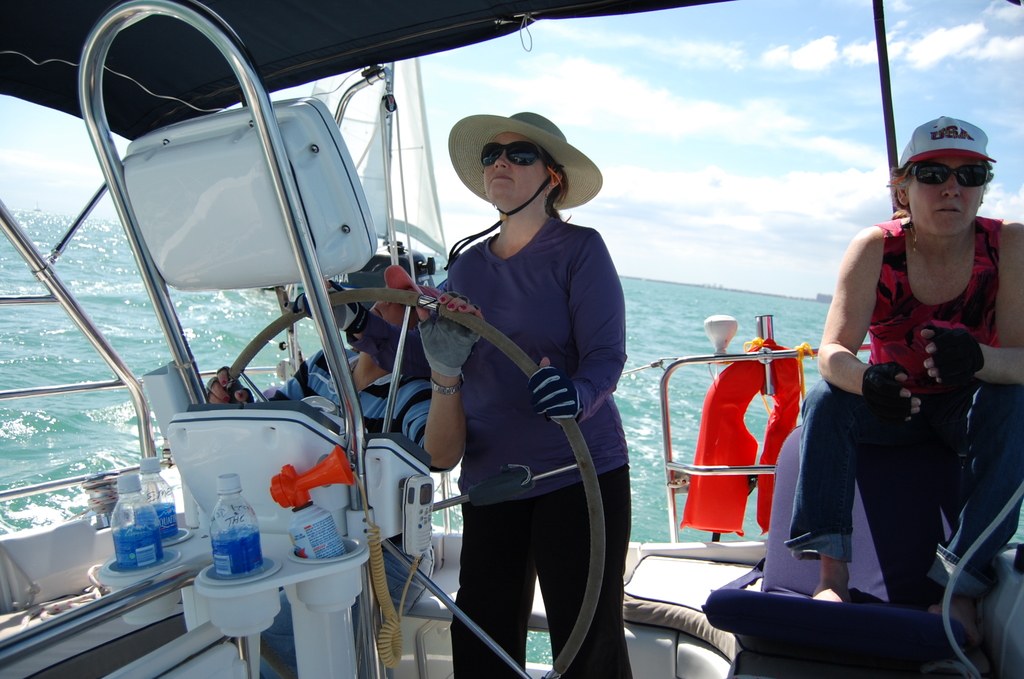 This is the adventure of 4 women for a week on my boat.

Saturday Girls Afloat – My best friends Jennifer, Leigh and Anne came down to Miami for a week of a girls retreat for some sailing fun. And what fun we had! Jennifer and Leigh both have sailed with me before on a charter boat in the Chesapeake cruise 2 years ago. Anne has never set foot on a sailboat. She is about to be hook on the…

Caught by the Lure of the Sea

Read about my love of sailing:

This is a link to my blog over on blogger.

LOOK OUT NOW, MAMA'S RUN OFF TO SEA & Other interesting articles, sites for sailing women

Lately I've been reading alot about women who are captains of vessels, hoping one day to be one of them. Here's an interesting story about five of them. Look Out Now, Mama’s Run Off To Sea!
Meet five women and the sailboats they captain
by Alice Snively

What do you mean Mama’s run off to sea?

Just that. And she’s only one of a growing number of women who are…

For the moment we have strong winds in Europe ....
In Greece ( Patras ) many boats are damaged ... http://www.patraslive.gr
For tonight they announced 70- 107 knots of wind in the region my boat is ...

this could be usefull for some of you

About three days to getting underway...