REPAIRS ON OUR BOATS

Permalink Reply by LOLA on June 1, 2009 at 4:00pm
I just ordered a 14 x 8 prop, from westbynorth.com out of Canada..it is a refurbised sailor 3 blade. guy does Freedoms, and many Freedom 30's. He himself has my engine.

You can find the info on his site. Go to the left on his site for info.

I may rename my boat...MY VISA CARD

THANKS FOR ALL THE INFO, AS IT WAS USED.

Permalink Reply by LOLA on June 5, 2009 at 7:34pm
OK I HAVE POSTED PHOTOS ON MY PAGE OF MY NEW CAMPBELL SAILOR PERPELLER

IT COMES OUT OF CANADA...HAVE A LOOK..

Permalink Reply by clare on June 13, 2009 at 11:30am
Hi Lola,
On our boat all fuel going in goes through a fuel filter funnel on its way to the tank. We usually add fuel from a jerry can rather than at the dock, but if we have to go to a fuel dock, the dock has to wait while we filter incoming diesel. The fuel filter funnel is a standard item at West Marine and not awfully expensive. There is always a small amount left at the bottom of the funnel which gets poured into a large mouth plastic bottle and added to the lawn mower fuel. The hope is that this process will keep the fuel clean. The boat's only in its third season of sailing, so time will tell. If you don't mind a slow pouring process to tank up, this might be a good thing to do after your fuel is polished.
Clare

Any ideas what is wrong? 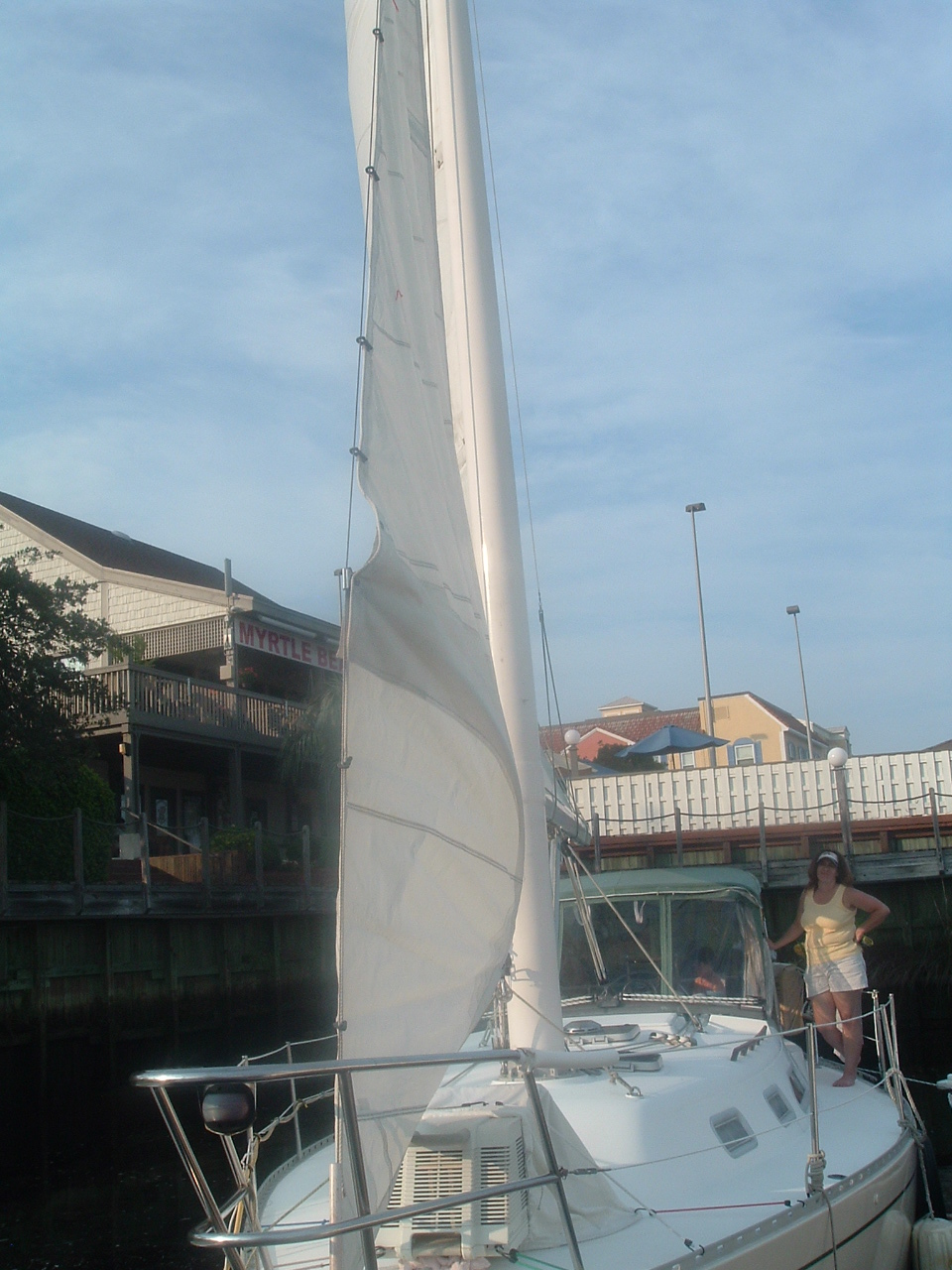 Permalink Reply by LOLA on July 22, 2009 at 1:43pm
I am replacing my rusty Bruce anchor chain, as it was messy on the deck..stains were hard to get off.

I also want to buy another anchor for the stern...What types do you like and why?

Permalink Reply by Melissa Renee on November 20, 2009 at 6:26pm
Get a Fortress or Danforth anchor. Can use for both the stern and bow. Easy to set, holds like crazy and disassembles for easy storage. Buy 8' of chain and 150' of anchor rode. Will hold in most bottoms. 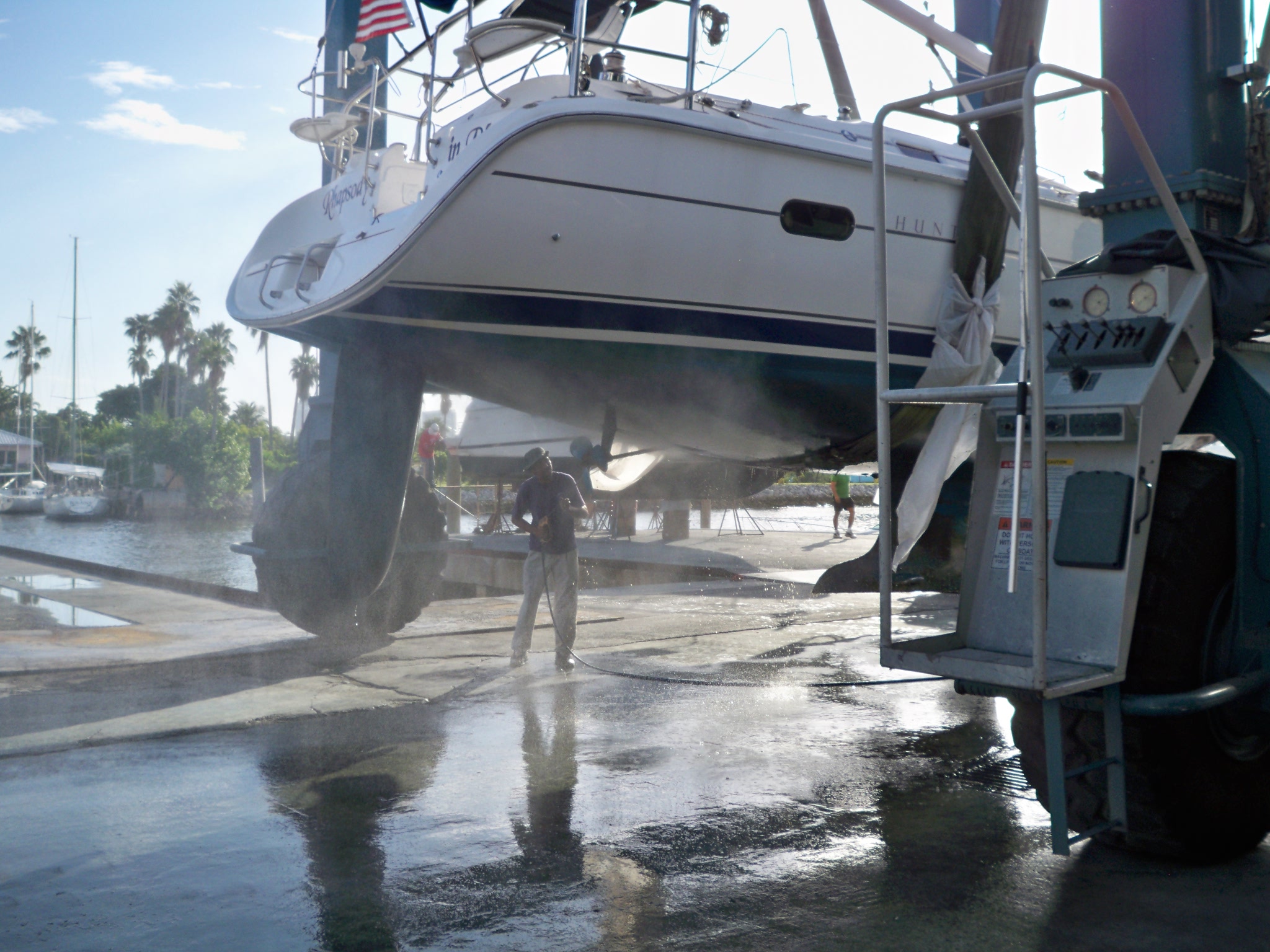 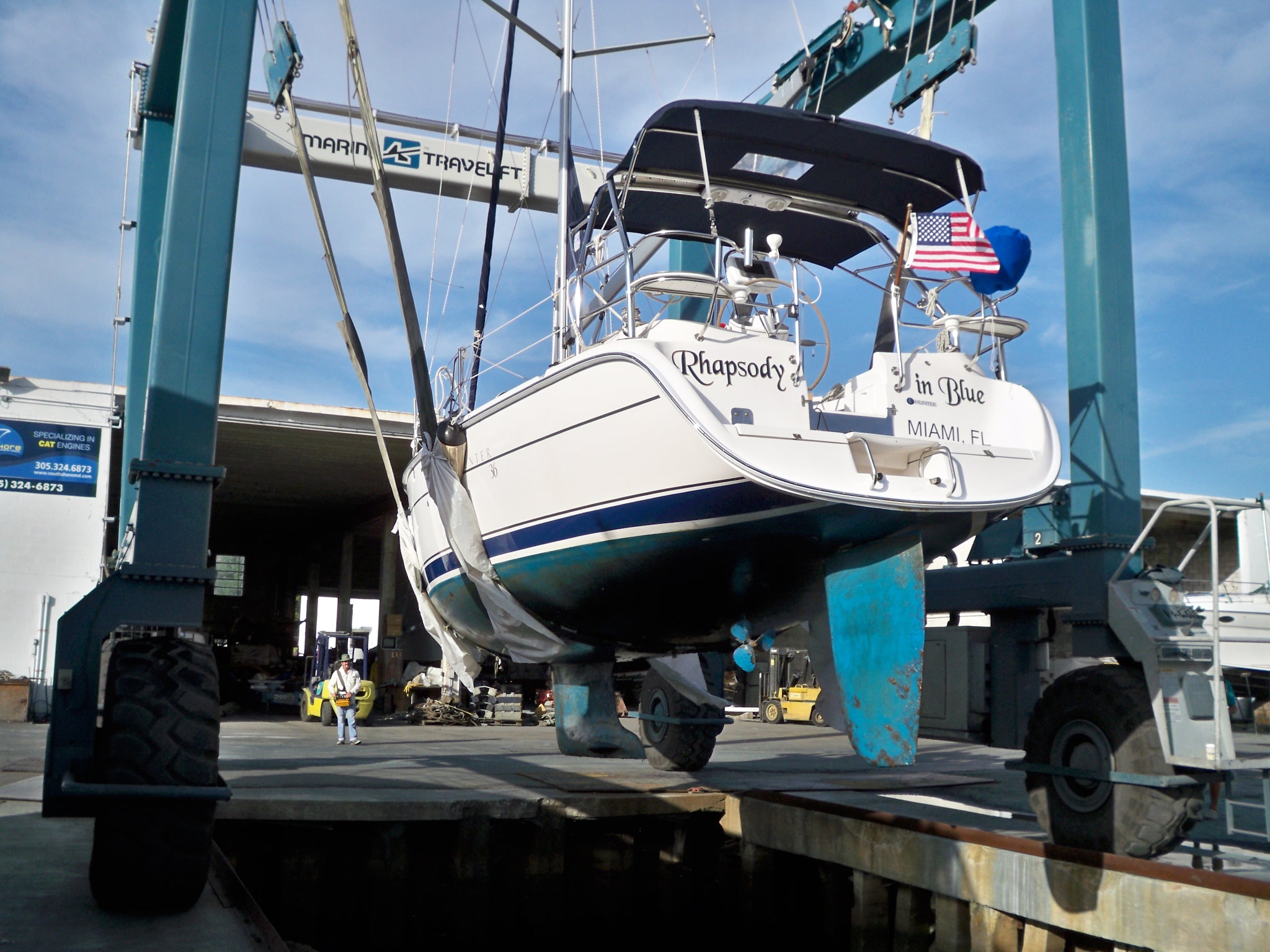 Baby has a new pair of Shoes -

It was that time for Rhapsody in Blue to get hauled out of the water for new bottom paint and entire replacement of the power train. Fred and I launched out at 540am to make the 630am bridge opening on the Miami River. We had 5 bridges to get through. It can be tricky on the river depending on the current flow. We showed at the first bridge, Brickell, right at 630am. So we didn't have to wait but a minute for the bridge to open. The river is very narrow and thank god no Bahama freighters were making their way down the bridge. We hailed the bridges on Channel 9, told them who we were, type vessel, and request opening The bridges talk to each other so they know who and what is coming up/down there way. One thanks them as they pass under each bridge. It is kind of cool, to watch the bridge master open up the bridge just for you, hold up traffic and such.
We got to Norseman Shipping Yard early, so we had to wait for the workers to arrive to haul out. When they did, they were all business. The travel lift is scary to watch as your baby gets hauled up out of the water on two slings. Their travel lift is ran by remote control which is pretty neat in itself. You can see in the photo the guy in front of the boat hold the remote control. Power-wash, than on to the stands, (HARD). Since I cleaned the bottom a month ago, the power-wash and scrapping of the bottom were real fast. Once on the "Hard", Fred and I tried for 6 hours to get the flange coupler off the shaft. It was real hot inside the boat. Fred and I both lost about 3 pounds in water loss. I talked to Rick (the owner of the yard) about it before we left for the day. He said sometimes we have to cut them off. The first coat of bottom paint was put on to dry.
Second day
I arrived at 0730 to the yard. I told Rick to take off the flange and take the shaft next door to see if it is true. It took the mechanic 15 minutes. I didn't know if I want to kill him or hug him. Here the right tools and experience comes into play. Once the shaft was out, I put in a new PYI Drippless packing gland. Second coat of bottom paint was applied.
The shaft came back from the prop shop after lunch and it was straight. They also mated a new flange and squared it off to the shaft. With the shaft back in, the new Campbell propeller went on as well as a new cutlass bearing. My baby has new shoes!
As you can tell I was determined to get rid of the squeal I have had since I owned the boat. As it turned out I was right along, it was a singing prop.
Third day Launch day.
When I arrived at the yard, Rhapsody was already in the water ready to go. I was a little disappointed for I wanted to watch the dance in getting her back in. Oh well. I came up the river with Ed on his dinghy. It was a fun ride over. He has a real nice big dinghy that goes with his Hatteras up in Atlanta. Ed is partners with Angela on her Hatteras where I slept last night. I launch out of the yard to make the 9am openings. Ed followed in his dinghy. I was nervous at first because I didn't know how the new propeller was going to handle. Can you say "SWEET!". As advertise, the Campbell propeller has more power at less RPM and little prop walk. Lets all say "SWEET!" again. I made all the opening except the last bridge. It was another 15 minutes before the next opening So what is a girl do to but practice with the new prop. I did my power exercises to see how she would handle. Can we say "SWEET"!. I tried several docking along a wall with many bumpers. For the first time I even parallel park the boat, come stern too the dock than hard over to parallel the boat. When the bridge opened I went back to the marina. One the way there, I opened up the throttle to see what speed I would get out of the prop. Hull speed, 7.5 knots, at 3200 RPM.(85% RPM's). Can we say "SWEET"! I gain a knot of speed in power mode.

Permalink Reply by LOLA on December 16, 2009 at 2:46pm
Going sailing tomorrow with Sailing Club Member...going to check rpm's...concerned as the diver could not get the prop off, and after he was hammering down there I have black smoke...when I checked in the slip ... it then went to white smoke.

I wanted prop off to spray Petit zinc paint on it. I needed bottom cleaned and had 2 zincs put on as well.

Feel free to chime in.

Permalink Reply by sailorgirlca on February 3, 2010 at 10:40am
This spring I have to replace the exhaust hose from the engine to the opening at the transom.......seems like an easy enough job once I get the hose off the fittings. It's the original hose so may be a bit difficult to get it off & the new one on. Also, plan to install GFIs in all the electrical outlets.....hear that's a fairly easy job. Then will sand the cabin sole and do a few coats of varnish to make it look nice. All the other jobs I haven't even thought of yet but the list is long.....wish me luck

The Ultimate Guide to RZUSA Cash App $750 Cashierless StoresCLICK HERE TO CLAIM YOUR OFFER NOWThe cashierless stores are becoming more and more popular in the world.The cashierless stores are an ideal solution for small retailers who want to reduce their costs. The technology behind these stores is called RZUSA Cash App, which is a mobile app that allows customers to pay with a credit card or by scanning the…See More
Monday
0 Comments 0 Likes