i  sit here waiting to repair what broke and some other stuff as well, and i watch th swells of th sea ---   wanting to be there instead of in a harbor--- there is a peace in the ocean that does not exist  in harbor or on land.  there may be  storms and  seas and disrupted water, but there is a peace in htat.

i am convinced i   should find a waterman as a mate, as opposed to any other kind of male ...  watermen know the sea and the ways…

Pardon my spanish, the first website link is where I will be in two days. The second website is what I will be surveying as my potential blue water cruiser.

Check out the location section of the Hotel Catamaran's website where "Good Enough" is docked. Notice that the little direction's map is animated and that all the boats in the harbor are multihulls!  Progress . . . .

we made mazatlan with 3 gal of diesel to   spare in tanage.>LOL..  made cabo in 60 kt winds which died to nothing by  time we fueled  and left there-- sooooooooooooooooooooo......am in mazatlan in   old harbor with a broken alternator bracket  and dirty tank-- both will be fixed soon, and   some woodwork needs to be effected,as th 60 kt winds   took off some caprail -- the decorative sternrail that bends…

Plunging into the depths of ...

Hopefully I won't be plunging into the depths of hell but rather into the land of sunshine and rainbows. Fewer rainbows perhaps because rainbows need rain and rain conjurs up storms and storms can be deadly. Other things can be deadly as well. Yet friends and other beings of the human kind seem to relate sailing offshore as a sure method of meeting one's demise. Who thinks about a deadly car crash on their routine drives, or a heart attack brought on by poor eating habits. Regardless of the…

What a Great Day, today I saw my son's new boat, Carl Alberg South East-23, it's a fine vessel..can't wait to sail together.. 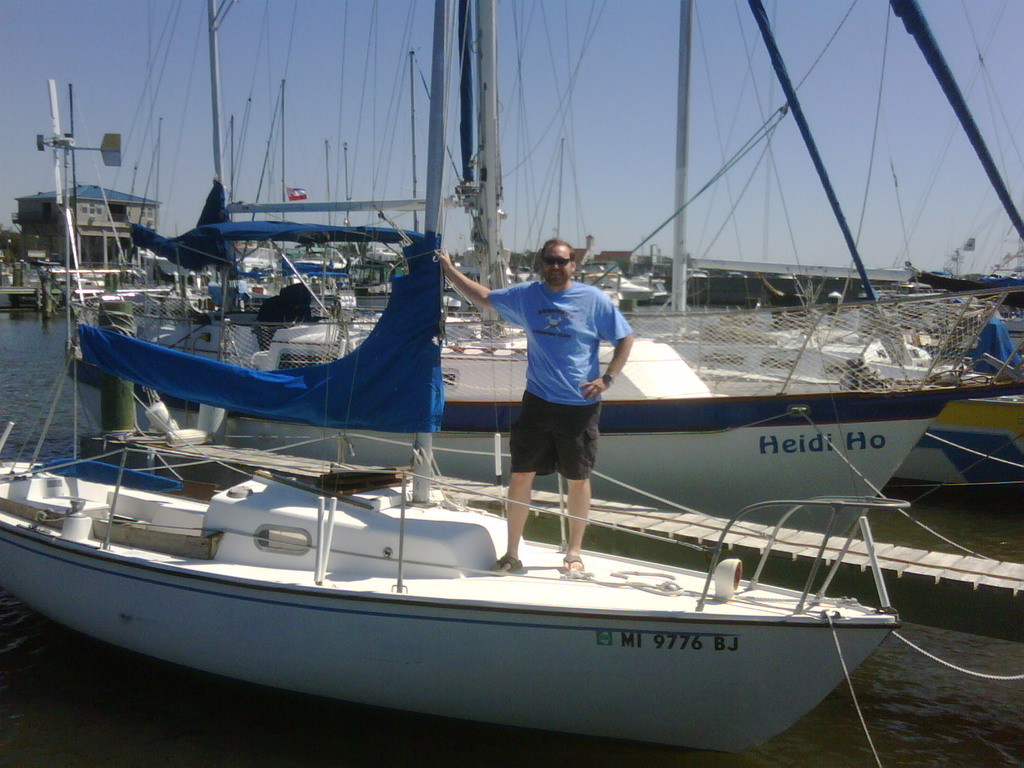 Needing crew to sail from  St Augustine to Chesapeake Bay. Any volunteers?

As part of our plans to set up for blue water cruising we have a few planned changes we wish to make (over time) to the power around the boat. One of the first things was to get an inverter and later we will supplement the battery capacity with a third domestic battery and some wind and solar generation.

Its not a hard modification to do, but it is something you have to take care with as one side is shore power voltage (240V for us) and the other is huge cables (70 sq mm) onto big…

If you happen to be crossing to the Abacos/  Bahamas  be careful on where you pick up Fuel.  Even the most respected places have BAD Fuel.  Why?  if they just received a delivery 2 or 3 hours before you got there and your one of the first one or two boats to get fuel,,,,, then you get the mess that was stirred up in the bottom if their tanks.  ASK..they will tell you and better yet;  wait for a Big Sport Fish to fill up then get your fuel.  If you cross and check in at Old Bahama Bay...... …