Rhapsody obtained the dingy from its caretaker – the Big Bamboo – at Hope Town on Saturday for convenience in transporting the 4-woman crew to the islands.  Rhapsody’s dingy was too small to ferry more than two people at a time and it had developed a small leak.

The day started out as planned with the dingy bouncing along behind the Rhapsody.  With an engine the same size as the one on the Rhapsody, the dingy would run circles around the sailing vessel, which crew member Jennifer Lewis proceeded to demonstrate.  Wearing a sarong tied around her neck like a cape, Ms. Lewis (now Superwoman) made several trips around the sail boat before she was vanquished ahead to go get ice and bring it back for early afternoon libations. 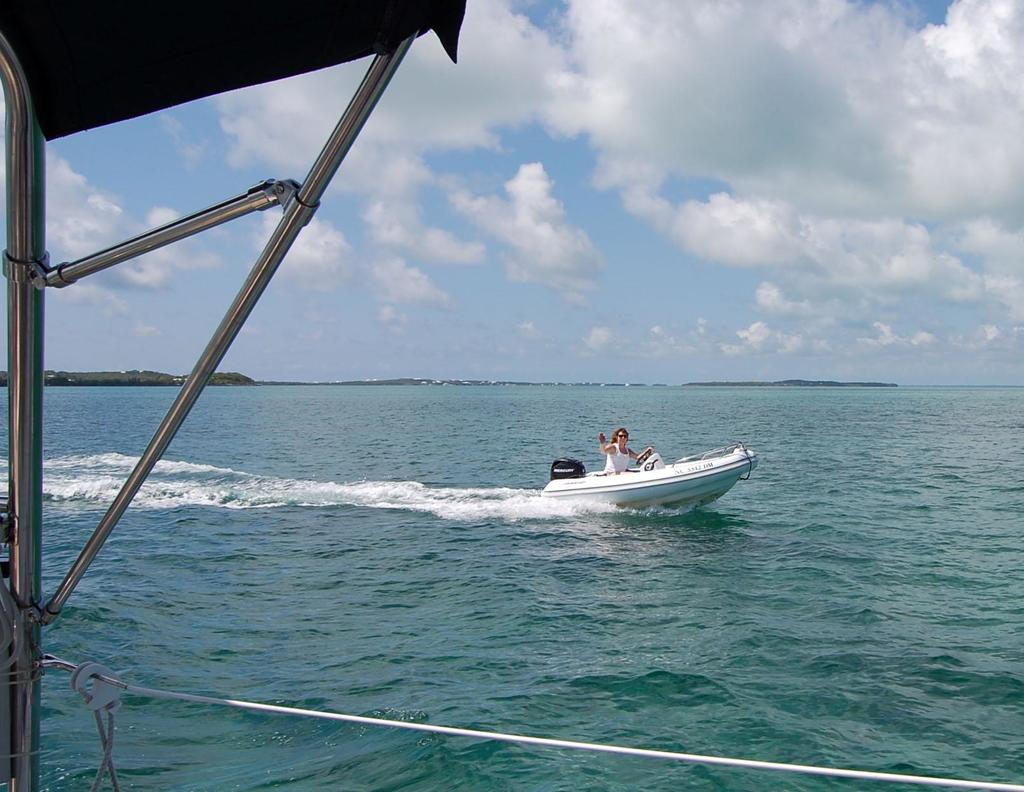 When Rhapsody reached Great Guana Cay, ice floating in cups on board, the crew tied up to a mooring ball and took the dingy to the pier at Grabbers.  The goal for the day was the pig roast at Nippers, a well-known local bar with great classic rock and dance music, two salt-water swimming pools, beach access and lots of partiers. After a couple of beers and turning into prunes in the lower pool, the crew went in search of frozen drinks at the local hangout by the pier where they anchored.  Live rake and shake (island) music blared around the fresh-water pool and the mango frozen drinks were refreshing.  A crowd started to gather and beautiful people started to fill the pool.  Not wanting to deal with another big crowd, and also, not wanting to be late for sundowners (happy hour) on the boat, the crew climbed down the 8-foot ladder into the Clayton dingy and returned to Rhapsody.

The crew had just sat down on deck to have sundowners when Ms. Lewis saw a nearby dingy capsize.  Captain Melissa Feinmel and Ms. Lewis immediately launched the Clayton dingy and headed toward the scene of the accident.  Upon arrival they quickly provided instructions for righting the dingy that were rejected, presumably because women could not possibly know how to do that. Fortunately a neighboring boater – a man – arrived on the scene and told them how to right the upturned boat.  Low and behold, that was a fabulous idea.

Captain Feinmel and Ms. Lewis offered to take the passengers to the sailboat they were traveling to before the aforementioned capsizing. The girl wouldn’t get into the dingy because she was concerned about moving away from the location where their stuff was in the water below. The guys couldn’t take a ride if the girl was staying, so Captain Feinmel and Ms. Lewis came back over to the Rhapsody to get snorkeling equipment.

Captain Feinmel and Ms. Lewis provided information about the location where the dingy capsized which was, once again, rejected by the dingy passengers who obviously knew nothing about current. Captain Feinmel triangulated the location perfectly, jumped in and came back up with the camera, several pairs of sunglasses and a wallet.

The other rescuer picked up one passenger, deposited him on the awaiting sail boat and wandered off, leaving Captain Feinmel and Ms. Lewis to tow and carry the rest to the sail boat. Time was of the essence because one passenger was bleeding profusely from a nasty gash in his forehead. Sharks could be a pending danger, said Ms. Lewis. A quick response could only be accomplished using the Clayton dingy, a vessel obviously designed for just this purpose. Captain Feinmel and Ms. Lewis returned to the Rhapsody to cheers from the crew, first mate Anne Moore and crewperson Liegh Elrod.  About this time a man appeared in the water next to the boat.  It turns out; he was the reason the dingy capsized. He explained that he was hot so he just slid off the side of the dingy to cool off (obviously not a physics major). Once again the Clayton dingy was called to duty, to carry the young man to shore.

Noting that the motor on the now righted dingy probably wasn’t working, Captain Feinmel and Ms. Lewis then motored over to the remaining passengers on the sail boat and offered to take them into shore. Captain Feinmel gave the dingy owner a few tips on drying out the motor, which were probably ignored, and they left.

Back on the Rhapsody after a day of good citizenship, the crew rinsed the blood out of the dingy and finished out the day with cold beer and rum.  A toast was raised to the Clayton dingy for its role in saving sunglasses, wallets, a camera and some ungrateful drunks.