The Pirate and the Lady

Hello everyone! I am a Charter Captain in the Virgin Islands. I am an ASA, PADI, and Emergency First Responder Instructor. I am a Commodore member in the Seven Seas Cruising Assn. I have been in the Caribbean almost 20 years now. I usually put the boat on the hard for Hurricane season, July to Oct. I head to New England and then to the Pacific coast. I spend 3 or 4 weeks sailing the San Juan Islands and Vancover with friends up there. Then back to the 7-24 grind for 9-10 months. To be… Continue

Welcome aboard to my Sailing Tips Blog! In this post we have Sailing Theory, Sailing Terms and Weather- The Sea Breeze. Please feel free to comment on anything here and visit our Web Site for a free Rules of the Road download! Sailing Theory (An Excerpt from our Learn to Sail CDROM)

The sum of all wind pressure on the sail is called wind force. The center of that… The S/V Sun Song is still overdue as of last night.

Hooray! I'm back in business! 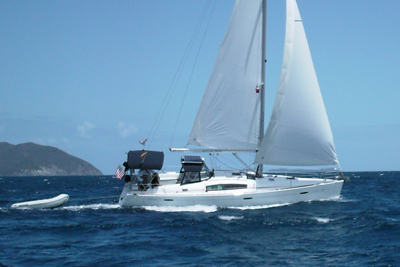 Wow! What a great sail! Gentle rollers with a nice breeze just off our port bow. We left Chubb Cay around 11:00 a.m. and headed for New Providence and Nassau Harbor. The day was perfect with sunshine and warm temperatures all the way to Nassau. Cleared in with Nassau Harbor control and proceeded by the big cruise ships to Nassau Yacht Haven arriving at 5:00 p.m. just as they were closing for the night. It's a nice marina if a little run down and funky compared to the ultra nice marina at Chubb… Continue

Sailing down to Costa Rica today,so will be off line for some time. Will post when I have internet access again. Peter

Sailing down to Costa Rica today,so will be off line for some time. Will post when I have internet access again.
Peter Continue