Those memorable moments on board 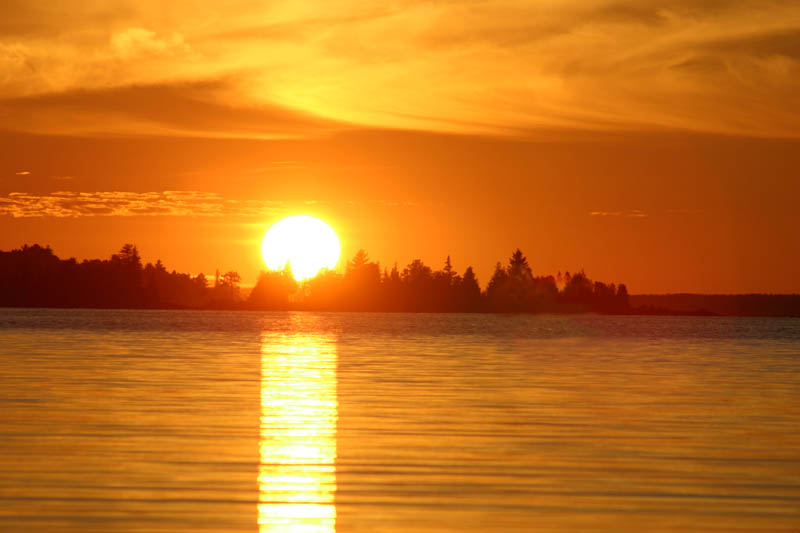 We experience them all all, those quiet moments on board when the world is perfect and beautiful , or those other moments when life on board becomes a challenge and we have deal with situations.

It's almost midnight. The moon hangs like a great, white ball just above the horizon. Clouds are sliding across the dark empty sky. The light touch of a warm breeze dances across my skin, then wanders on to find its way to the crooked pine trees beside me, rocking their branches to the beat of a silent song. In their battle for survival, having succumbed to the pounding force of the wind, they’ve taken on the look of weather- beaten skeletons.

It's that magic time between night and day, when the earth touches the sky in a never-ending journey of the universe in motion.

This is the Georgian Bay, native land of the Algonquin and Ojibwa peoples, a complex puzzle of land and water in the assembly of our blue planet. A place where many vessels have found a permanent resting place on the bottom of this deep and dangerous inland sea, the place of 30 000 islands and shoals. Many lives have been lost in its cold, clear water. It's an unforgiving place, where sailors and pleasure boaters are humbled by the forces of nature, and those who don't bend, and those who don’t listen, will take their stories to their graves.

The wide waters of Lake Huron are stretched out before me in all of their glory. As far as the eye can see the dark mass of tiny waves, driven by the unseen force of nature, are trying to find their way to shore where patiently I await their arrival.

I'm lying in the darkness on the flat surface of granite stone that is still radiating the heat of a hot summer's day and it's now warming my body. Night has fallen silently over Franklin Island. The ospreys and seagulls, the permanent occupants of the island, have settled down on their perches for the night. In the distance I hear the eerie call of a loon.

There she lies in a pool of liquid silver, my vessel, my friend, my faithful companion. She’s been with me when the lake turns wild with anger in the fury of a gale. She’s kept me safe at the mercy of the elements. She’s taken me to safe harbour. She’s mine, mine alone, to love and behold. But now, she’s lying at anchor in the shallow sandy lagoon, sleeping peacefully in a bay at Franklin island, gentle waves rocking her to sleep, lapping at her hull, caressing her bow.

I’m on watch at the rocky point, which is bathed in the eerie illumination of the rising moon. Once in a while, when the moon disappears behind a veil of clouds, the rock is engulfed in total darkness, only to re-appear, bright and comforting, as the clouds high above me move on. I let my imagination drift to other worlds, other places, while waves roll into the bay and crash onto the rocks below.

The emptiness of the universe is obstructed by millions of distant stars, twinkling brightly overhead. The Big Dipper,
Polaris, and Rigel are clearly identifiable. Orion threatens with his sword extended in warning to the world below. The Milky Way looks like a sparkly ribbon in the sky. Once in a while, a satellite finds its way across the starry sky, disrupting the moving arrangement of the heavens.

Out there, in the darkness, I see the navigational lights of Snug Harbour and Snake Island. A comforting site, a safe heaven, in case the weather god decides to act up and turn this calm night into the battlefield that I know so well.

Is there a more beautiful night, a more beautiful space in the northern hemisphere?
I don't need a roof over my head tonight. I'll be all right out here, at peace with myself and the world around me. We’re at home and we’re safe, my vessel and I. I fall asleep as the wind kisses me good night, and the sound of the waves join in the chorus of a lullaby.

Permalink Reply by Liv on April 30, 2009 at 2:51pm
Lake Huron, and also Lake Superior , is one of the most beautiful bodies of water in the North.
But, it's a big inland 'sea' and not without it's dangers to boaters.

Permalink Reply by ___/)ances With Sails on April 30, 2009 at 6:56pm
WHAT A BIG DIFFRENCE THE WIND MAKES IN OUR LIVES
PERHAPS THE BEST THING SINCE RIGOROUS WIVES
WHEN HOT IT CAN CHILL.
CLEAR THE SKY TO A STILL
NEVER ENDING CHANGE
EXPOSING THE SUN TO HEAT THE EARTH
BRINGING A FORCE FROM THE RANGE
A FORCE FROM THE RANGE TO THE WATERS OF BLUE

HOW BRIGHT CAN ONE BE
TO BE BLOWN ACROSS THE SEA
WITH SO MUCH TO CONSIDER
LIKE LAND AND THE WEATHER
IMAGINE THE MIND AS BUSY CAN BE
NO TIME TO SLEEP IN THE MIDDLE OF THE SEA
DATED WAY BACK TO THE BEGINNING OF TIME
YEARLY VOYAGES FOR SPICES AS THYME
HARNESSED FOR WORK AND FOR PLAY TOO
RACES WERE WON THE HARDER THE WIND BLEW
NOT TO SOUND AS IF IT’S ALL IN THE PAST
TODAY THEY HOIST AND STILL MAKE FAST
WISH I WAS SAILING EVEN AS YOU READ
MAYBE I AM ABOARD MY WIND BORN STEED
WITH A LITTLE BIT OF EFFORT
IT’S NOTHING FOR A STEPPER
LITTLE FOR SOME, LOTTA FOR OTHERS
FOREVER THANKFUL FOR OUR BROTHERS
FOR PASSING IT DOWN THAT KNOWLEDGE TO SAIL
AND TO THE ONE WITH SENSE TO BRING A BUCKET TO BAIL
THE WATER TAKEN IN
AS WE HEAL WITH THE WIND
FORCING BODIES WEATHER WAY AND OVER THE SIDE
CATCHING THE BOW WAVE
MAKING USE OF THE TIDE
EFFECT OF THE WIND
HEAR WE MENTION AGAIN

We Met Up The Street.
I Thought She Was Neat.
I Yearned To Get Her Wet.
For A few Dollars Less,
Her Mother Said, I Guess,
You Were Made For Each Other Now Get!
With A Compass Aboard
This Girl I Adored,
We Set To The Open Waters.
Got A New Love,
A Hot Steamy Passion.
One That Ceases Chasing Daughters.
It Is Her I control,
Keeping Her So,
And Getting My Thrills
The Harder The Winds Blow.
She Leans To Me Covering
Me With The Sheets Of Her Willingness,
As Her Fullfilled Rightousness Carries Us Away.
A Timeless Relationship,
Lasting For Eternity,
And Taking It Day By Day.
With My Hands Upon Her
I Feel Her Gentleness,
But Oh How She Comes Alive.
We Get Carried Away
Reaching And Beating
Till Eventually We Jibe.
She Is So Giving A Dream Come True.
I Am So Lovesick You Haven't A clue.
As I Sprawl Atop Of Her Together We Flew,
Together, Together,
Today And Tomorrow Too.

Permalink Reply by ___/)ances With Sails on May 1, 2009 at 9:59am
I believe ye stated "Those memorable moments on board" (reading the discussion title.) Where is your mind at this morning? I felt this was a good place to FINALLY put some of my old work up to share. It IS about my time aboard, but then, what poet/sailor needs to explain themself?

Ain't censorin' shit!!, but can take my concupiscence elsewhere.
___/)

Like you, I write a lot; lot's to write about when on anchor on those long evenings under the stars, brings out the poet in most of us. I guess it's that conncetion with the universe that makes us sentimental.
Good thing when one can forget about about the routine of our daily lives, the constantly bad news that is going on on our blue planet that we're bomboarded with.

Permalink Reply by John Shasteen on April 30, 2009 at 8:57pm
For "most memorable" beauty, the clear, star-peppered night sky of the Southern Gulf of Mexico is hard to beat.
But the "most memorable" moment aboard Paloma was when hours of boredom was punctuated by seconds of terror - when we got hit with the March '08 Force 10 storm in the Gulf - it knocked us from a 10-15 degree port heel through a 100 degree arc to the starboard cabin trunk grab handles and sails in the water - Memorable? Hard to forget.