With three dates in three days this week-end sure flew by. The first pros[ect backed out about ten minutes before we were to meet. The second prospect was enjoyable for a few hours of meanderation at the Big Pine Flea Market followed by lunch at Hurricanes. This morning brunch at the Stuffed Pig was most enjoyable. Conversation flowed along topics of interest.

The week-ends bonus is about to take place at Boot Key's annual Super Bowl party. Who plays, who wins, who has the best commercials is of no consequence. With lots of blogging to blog, updating my SPOT information, and catching up with all my friends via e-mail will fill my time and keep me attentive while scouting the array of sailors. Always shopping for the perfect mate, what better place for a healthy, attractive female to be than at the holy grail of football games.

In the meantime for a recap of the past few days, here are some picture stories.

This moonlit sky was taken from the galley stern castle window last evening. With a perfectly formed resemblance of a clean cut thumbnail, the moon set a perfect mood for quiet contemplation. Something the solo sailor does a lot of. This next pix is one of my two favorite photos of Dan the Man. After marinating in frustration over flying home from Abaco in order to be at a new job on a Monday morning, the airline folks finally announced free cab fare from Treasure Cay to Marsha Harbor. It was a rare, spontaneous smile that was caught on film. Usually a more subdued character it was fun watching Dan's happy demeanor over the bitter suite  return to the states while I looked forward to six more weeks sailing about the crystal clear waters of the northern Bahamas known as Abaco.

The frustration was the result of the airline that Danny was booked on had gone out of business a few hours before his booked flight. It was the end of the Melbourne to Treasure Cay flights. Fast forward five years and here I am happily crossing on the ferry to Seattle (3 years after Danny's untimely death).  I was clueless that my cross country camping partner was about to propose I sail on alone. Thankful, though that on this particular day I provided some condolence when he learned one of his dearest friends had died. It was one of the last times Ron wrapped his arms around me in an emotional moment of endearment. 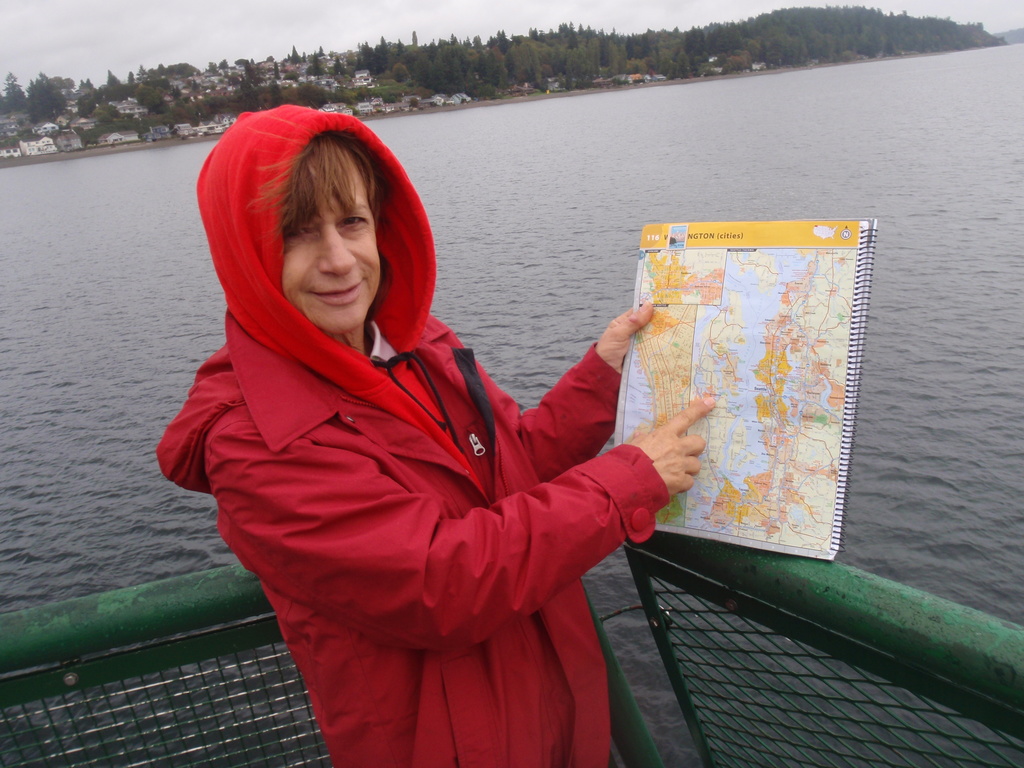 Lastly, for today's blog, unless I get inspired later,,,,,This is a group shot of a good sailing friend, Hope. Pictured with the team she hiked to the bottom of the Grand Canyon with a few months before Ron and I made part of the trek. Hope's mom knew what she was doing when she gave her daughter an inspiring name. While I cry and whine over a jealous heart, Hope endures the wrath cancer instills. About fifteen years ago Hope made the trip from Oklahoma to Indialantic, Florida to compete against me in a major Hobie 14 regatta. Due to hurricane Francis or Jeanne or one of those, we were fortunate to spend the week-end glued to the television. Every few hours we briskly trekked to the ocean, about a block away. Never having to race against each other, there certainly were none of those precarious situations that sometimes bring out the worst between competing friends. Indeed, the week-end forged a lasting friendship, built on Hope! Well, poopy, I just learned the marina made a rule. No one is allowed to use their computer inside the giant room where the Superbowl is being viewed. What a stupid rule. As if my sitting silently alone in a corner is going to impact testosterone watching. It will be curious whether the room even fills up with such idle minded sedetarians.

Oh well, outside I will go. Carry on.