It is a small space

It is a small space, but I never thought of it that way.  Paneled in rich dark honey colored teak the interior of my sailboat seems soothing to me.  The largest “room” on the boat is the solon and it’s about eleven feet wide by eleven feet long.  Of course within the solon are the settees which borders the port side of the solon area from beneath the companion way ladder thwart ship to the port side of the area then forward to the bulkhead and where it makes a right angled turn to extend all the way to the teak covered keel stepped mast.  Behind the settee along the port side are storage lockers and book shelves.  Beneath the seats are deep storage bins that can only be accessed by removing the seat cushions.  In the middle of this “[“shaped seating area is the folding teak dining table.  It sets on a solid single pole and swivels when a brake is loosened.  When the table is folded open it can seat four people comfortably or six if I brought in two chairs (which I don’t have but might get at some point) but most of the time I just flip one side over to make a smaller table giving me more room to move around in.  Down the starboard side of the solon is the galley (kitchen) with its double sink, gimbaled three burner gas stove with oven, and a top loading refrigerator.  Beneath the sink are drawers and cabinets for storing utensils, plastic freezer bags, trash bins, etc.  Just like at home in a house.  Above the sink and refrigerator are more storage cabinets and shelves for glasses, cups, plates and other odds and ends.  It is a small space, but it is also a safe place because in a seaway, as the boat is moving about pitching or rolling to the sometimes dramatic action of the ocean, I can reach out easily to grab hold of a something to keep from flying across the room and injuring myself.  Another plus is that it is easy to sweep the beautiful teak and holy floor with a brush and dust pan in less than two minutes.  By Joe, I can sweep and mop the whole interior of the boat in less than ten minutes.  That’s two bed rooms, work shop, two passage ways, solon, and head all done in less time than most folk spend cleaning their kitchen floor each evening after washing the dinner dishes.

I submit the above preamble in some ways to validate my choice to live aboard my sailboat to those beloved friends and family that, on first impression, find my home to be more confined than they are comfortable with.  I get it because most everyone needs more space to be at ease living in.  Rooms for entertainment, rooms for family time, rooms for dinning, sleeping, bathing, exercising, and rooms so that you can just get away to be by yourself.  Space for living is a precious commodity and I do not in any way gainsay people’s desire to have as much as they want.  So when my good friend, Janet, said when she first came down below into my boat, “I don’t think I could live in a place this small,” I completely understood.  Boat life is not for everyone.  It is reserved for those of us who have different ways of meeting our life needs.  Most everything about living on a sailboat and cruising about the waterways is about limits.  The amount of water is limited to what can be stored in a tank; the same is true for fuel for both the engine and the stove.  The space to store tools, spare parts, lubricants, paint, food, and clothing is all exceedingly limited.  Power to run electrical tools, lights, navigation instruments, refrigeration, radar and entertainment systems is all limited to what I can store in batteries and to what I can generate using the engine and the solar panels.  These limitations provide me with two important things; first a deep appreciation for what my self-imposed restrictions deny to me and secondly, freedom to move about the world and explore.  If you have ever been camping for an extended period of time you have experienced the utter pleasure of an unlimited hot shower when you returned home.  I once wrote in a blog about an extended motorcycle trip that I’d taken to Key West, that after two weeks riding on a motorcycle that even a very modest economy car felt like a high end luxury automobile.  I’m sure you get my point.  The other major benefit and the one that defines me most deeply is the freedom to sail to somewhere different.  When I was very young, back before color TV, there was a program that we watched called “The Happy Wanderer”.  It was an early travel log that explored different places in the world that most Americans had not, nor most likely never would, visit.  That desire to see what I’d never seen before and the freedom to do that was, and still is, tremendously appealing to me.  I still remember parts of the theme song of the show;

“High overhead, the skylarks wing,
They never rest at home
But just like me, they love to sing,
As o'er the world we roam.

Oh, may I go a-wandering
Until the day I die!
Oh, may I always laugh and sing,
Beneath God's clear blue sky!”

At any rate, when I received a late night call from my dear friend, Janet, asking if she could come for a visit, I was overjoyed to encourage her to do so.  Janet and I shared a love of motorcycles which we had enhanced through an online group called “The Roadstar Clinic”.  The clinic is a worldwide membership of Yamahas Roadstar motorcycle owners who share technical and experiential information with each other.  An attractive woman, Janet had requested from the Clinic members that they vote for her in some sort of motorcycle calendar competition, which, from the photos that she posted made perfect sense to me.  We had not communicated very extensively while on the Clinic, but Face Book friending connected us more expansively and we began to share timelines.  She and I would “like” or briefly comment on each other’s posts from time to time.  At some point I became aware of a subtle note of melancholy in her posts and inquired of her about that.  I’ll not go into any details save to say that as a result of my expression of concern we have become better friends.  At one point Janet had expressed a desire to meet me face to face and I had offered her a cabin on the boat for her to stay in if she was ever in the area.  It was a ten hour drive for her from northern Ohio but she arrived about 0830 the next morning tired but excited to see me.  Her boyfriend, Scott, was driving up from Florida the same day and would be arriving latter that night.  We went out for breakfast after stowing her bags aboard the boat and talked like good friends do after a long separation.  Later that afternoon we drove into town and I introduced her to New Bern’s hallmark soda fountain where Pepsi Cola was invented.  Janet got a real kick out of that which pleased me no end.  After finishing our sodas we walked up the street chatting and looking in shop windows.  A dress shop caught her attention and her shy, “do you mind?” request to go in produced a wry smile on my face as I nodded my consent.  Girls will be girls and dress shops are something men just need to get used to as a fact of life.  Of course it didn’t take too long before Janet had to try on a couple of items she had found so I got to enjoy a little floor show enhanced by the opportunity to zip up her dress.  There are some things about having a woman in my life that I really miss a lot.  After she had purchased a cute new sun dress we continued walking a while stopping in at an art gallery to look about and then returning to the car.  My Son-in-Law’s birthday party was planned for that evening and I had gotten Marina’s permission to bring Janet along as my guest.  We drove to Goldsboro and joined the party about quarter to six and had a great time celebrating with family enjoying food, ice cream cake, and plenty of laughter.  Driving back to New Bern was quiet as Janet was tired from an overnight drive and only a couple of hours rest.  She had declined the offer of a stateroom on the boat for the night and Scott had gotten a room for them at the Holiday Inn.  I took Janet to the hotel, was introduce to Scott and after unloading her bags I bid them goodnight and returned to the boat.  In the morning I got busy with boat chores.  I repaired a fan in the aft cabin that had stopped working.  Not a big deal actually for all it needed was to be disassembled and oiled a bit to get it functioning properly and reinstalled.  I opened up the engine room to explore the fuel system with the view toward installing a backup fuel filtering and fuel polishing setup.  I took note of the size fuel line that I’d need as well as discovering that places to mount the additional pump and filter were available in fairly easy to access places.  Likewise, I took some time to explore the water makers plumbing in an effort to learn a bit more about it.  Clearly I’m going to need to sit down with the manual and figure out this complicated system.  Fortunately there is a dealer for the Spectra system in Wilmington.    I went up to the club house to meet up with Tim to get his help with installing a Linux based navigation program on my lap top computer and while we were able to get the charts working and the program running we were unable to get it to connect with the internet which prevents me from down loading the GRIB files (weather prediction information) which was a real bummer.  Later Scott and Janet stopped by to share lunch with me on the boat and we talked pleasantly for several hours.  Late that afternoon I bid them good-by and drove back to Goldsboro.  It was good to finally meet Janet face to face and enjoy our brief time together.  On the other hand, having her aboard underscored an acute emptiness in my life; that which is filled only by a vivacious female companion.  I’ll have to do something about that I think. 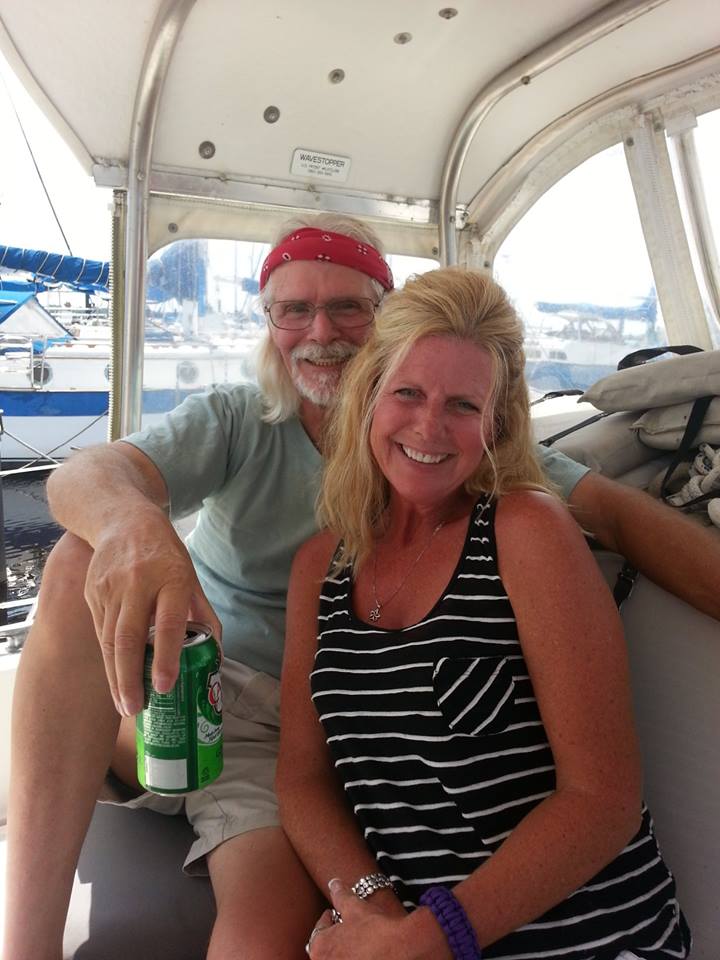