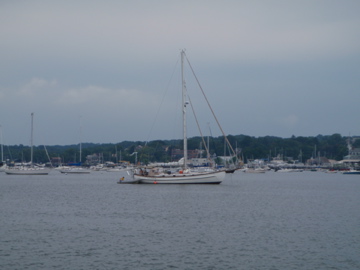 Today was an unexpected surprise. Franc and I had met our friends John and Emily on s/v Jezebel in Manhasset Bay for dinner last evening. It was so great to see them because they were not able to make the Summer Equator dinner last weekend. As always, we had a lovely time. What was an unexpected bonus was to meet the guests that they were going to be sailing with for the next few days, Kim and Pierre from s/v Victoria. There were four crewmembers on the boat but we only met the first two for dinner yesterday evening. It was so exciting to learn about their adventures and stories of what they have accomplished. They are currently on their second full time cruising trip. Most people dream for the first one to become a reality and here they were on their second.

Getting back to today. We were invited over to Victoria for a tour in the morning. We do not have a dingy yet so they had to come to get us. We experienced a first for one of the crewmembers that day. Thomas, a daring young man who was the son of Kim and Pierre, came over to get us by himself! That was the first time he had been allowed to take the dinghy out all by himself. You would never know it though. This 8 year old was so calm and courteous you would have never guessed that today was the first time out without anyone else on board. He didn't even let us know - we found out through the course of the conversation. Only then did he share his excitement. He was extremely polite.

We arrived at s/v Victoria and found Patrick, the 4th crewmember we hadn't met yet. He is the twin brother of Thomas. (Right away I tried to remember...okay-Thomas is in the gray shirt and Patrick is in the green, Patrick is in green like St. Patrick's Day is green - got it). Victoria is a 41' Lord Nelson. Through the tour, I found that it had 2 cabins and an 'attic'. I loved the boat. There was so much room for storage and the layout was so practical. The woodwork was just beautiful and so well maintained. The details we found were so charming. The large wooden table in the saloon had a marble chess or checkerboard built in. The 2nd cabin had a sink in it. And then there was the "attic". This was the space for everything that they were not using right now, or in the very near future. I though that was such a clever name. Perhaps we will be changing the name of our 3rd cabin from our "walk in closet" to the attic as well.

I was so amazed by the politeness and respect shown by Patrick and Thomas. They personally made sure that I got the full tour of Victoria including some of the rules they have. I loved hearing about the boat and their perspectives since they have been aboard. After we solved a treasure hunt game, Patrick showed me a notebook where he draws all of his monster cartoon figures. We went through each one. What amazed me so much was that there were at least 50 of them in there and for each one both he and Thomas both knew all about the monster. If it was good or bad, what powers they had and how they used their powers. I couldn't believe the level of detail that they had in planning the drawing upfront and then remembering the details of each one. It was amazing. Kim and Pierre were so interesting. We could have talked for hours. They had some great advice on all aspects of cruising from night watches to the mechanics of the boat. Kim showed me a great item to keep the pastas on the boat fresh. It’s made by Reynolds and is found in any supermarket. You buy the mini vacuum and bags for a nominal fee and your food stays fresh! I cannot wait to go out and get it. 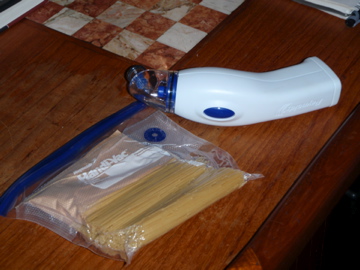 My parents were coming to see us and had arrived while we were aboard Victoria. Pierre and Kim were so kind and offered us their dingy to go pick them up on the dock. I asked if it would be okay if Thomas could go with Franc to pick them up-with Thomas as the captain of course. I wanted my parents to see this first hand and see how responsible an 8 year old can be. They were so impressed and will not forget this experience for some time.

When my parents arrived I hopped onto the dinghy and went for a tour of Jezebel, John and Emily's new Sabre. It was also a great boat. So clean and beautiful... The woodwork was perfect. John and Emily are true hard-core sailors. If you didn't know that when you met them, you should soon find out once you were aboard their boat. You would not even need to let the sails out. You would get your first hunch when you saw that they turned a bookshelf into a sailing glove hanging locker. It was very creative and very practical for them. 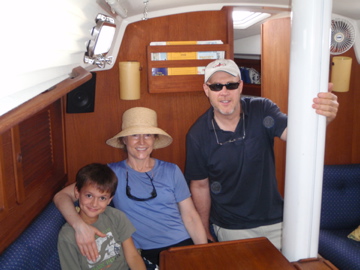 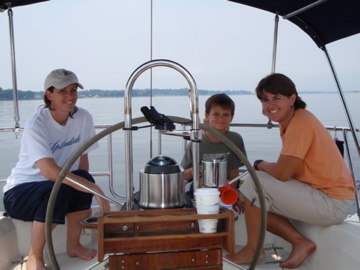 We then were off to show Patrick and Thomas a tour of our boat. 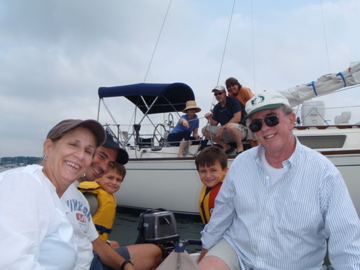 They took us by dinghy and we arrived safely again. They called our "attic" a sitting room. I thought that was funny, but that is really what it looked like. I had to laugh. We played a question and answer game about the titanic. Again, what smart young men they were. They had us baffled. They stayed for a bit, had some hotdogs and then before more storms blew in they had to go home. What a pleasure it was to meet the crew of Victoria. We have plans to meet up in October again. I cannot wait to hear about all the new monsters! :-) 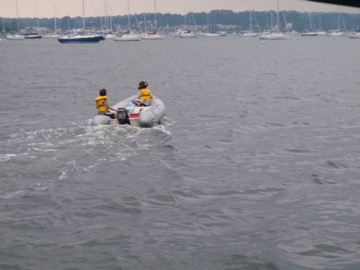 Comment by Pierre and Kim Russell on August 6, 2008 at 7:36pm
Thanks for those nice comments. We look forward to seeing you again in October. The boys had a lot of fun with you all. Loved your photos.
Kim & Pierre