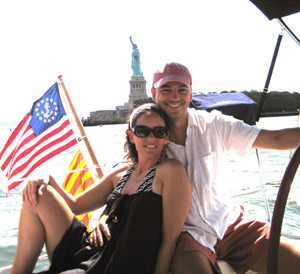 How a couple of cruisers created one of the biggest online raftups in America.

Everything started when Franc and Andrea met on the waters of the New York Harbor in the summer of 2000. They were both looking to get away from their busy lives in the big city when they discovered the Manhattan Sailing Club. All it took was a few day sails in the harbor and a charter in the BVIs for them to realize that they had a lot of sea miles ahead together. It was during a sailing trip up the Spanish Costa Brava that Franc got on one knee and proposed to Andrea. In less than a year they were married, and skipping the usual drill of buying a house or a car they bought their first boat instead. In the years that followed they became a fixture at their local marina in the NY Harbor. They were always the life of the party filling the cockpit with friends, food and wine at all times. They often organized weekend trips to Oyster Bay and even established an off-season tradition called the Winter Equator that allowed them to meet up with sailing friends every January which is the midpoint of the non sailing season in the NY Harbor. Today, it is not unusual for sailors in the New York Harbor to admit they met through an introduction from Andrea and Franc.

But it wasn’t until they visited their friends Michael and Daniel on Splendido that the big idea of SeaKnots was born. Michael had just retired and was cruising the Bahamas at the time. That trip introduced them to the full-time cruising life for the first time. One of the things that struck Andrea and Franc the most was watching cruisers run for the nearest Internet hotspot, laptop in hand as soon as their dinghies hit the dock. They were also fascinated to learn that cruisers had business cards made for their boats filled with complicated e-mail and web addresses so crews could keep in touch after going their separate ways.

It was then that Andrea and Franc wondered if there could be a better way to stay in touch while cruising. An online destination where all you needed to know was the boat name to find a fellow cruiser; a place where you could socialize and meet other sailors in your area or with whom you had common interests. A quick Google search quickly disappointed them, however.

But that was not going to stop Andrea and Franc. So they decided to take matters into their own hands and started SeaKnots.

As a Digital Marketing executive at a major record label, Franc was very familiar with MySpace. He had observed music fans interact with his bands and with each other for a long time. MySpace pages filled with photos, videos, blogs and friend comments quickly became the virtual calling card for their users. Soon, other social networks followed within other established communities like college students (Facebook) or business contacts (LinkedIn). But there was certainly nothing for sailors and cruisers to interact in the same way at the time.

Sure, there were plenty of websites targeting boaters. From Yahoo! Groups to sailing blogs, including numerous online forums and discussion boards. There were also thousands of individual sites that boaters created to showcase their vessels and adventures. None of those sites however facilitated the interaction that social networks could provide. Cruisers were spending hours typing their stories and posting them on their sites, yet blogs inevitably ended up with the familiar sight of “zero comments” at the bottom. Friends and family may have been reading them but authors were missing out on the thousands of like-minded sailors out there that didn’t know the site existed.

Andrea and Franc envisioned a place where boaters could have an identity and socialize in the way that MySpace had done for music fans. But what they didn’t envision at the time was how fast this online community would grow. It may have started with cruisers but it soon expanded beyond that and to all that love the sea. New members often invite their friends right after they join. Unlike some blog sites out there, all the features on SeaKnots are free so the word is spreading quickly around the world. Although most of the traffic comes from the US, SeaKnots now boasts visitors from almost 100 countries.

Members are now meeting marina neighbors online before they even bump into each other at the dock. Some are even seeking advice about their next destination by simply searching for a member who has been there before. Crews are finding boats and boats are finding crew. Boat owners also started creating SeaKnots Groups so they can easily meet other members with similar boats and exchange tips. Even old friends that had lost touch are now reconnecting on the site.

Hosting a “virtual raftup” of hundreds of sailors around the world on SeaKnots may not be the same as getting a few boats rafted up in Oyster Bay but Franc and Andrea try to keep it as casual.

Franc and Andrea sail their Beneteau 43, Can Drac, out of the New York Harbor and run SeaKnots in their spare time.

Comment by Art Dufresne on November 22, 2008 at 11:09am
Thanks for establishing this great meeting place for boaters. I'm in NY harbor as well but was introduced to the site by my sailing friend in Costa Rica and have both joined some groups and set up some for areas of common interest.

Comment by Tim on November 16, 2008 at 11:31pm
Thanks so much for the great site! I'm sure many would agree that a site like this was long overdue. Cheers.

Comment by John on November 12, 2008 at 10:00pm
Thank you so much. Your pioneering spirit has enriched all of our lives!

Comment by Frederick k McElroy on November 11, 2008 at 12:18pm
Congratulations on your creative genius! Keep up your appreciated efforts.