The Sailing Ketch Morning Star with a long and illustrious career, having been built in China in 1968 by the eminent Robin Fong Boat Yard, and cruised 1½ circumnavigations of the world from 1973 through 1981, as related in the book, Voyage of Commitment Morning Star Around The World, by Raymond F. Triplett;  1983.  And subsequently having come to us after setting idly in San Francisco Bay for nearly fifteen years, this little ship was in need of a good deal of remedial maintenance.

These past 7 years have been dedicated thus far to restoring this beautiful vessel to her earlier condition.  After moving aboard our boat in January 2004, a dream we had shared for almost 30 years, and well into the restoration of the Morning Star.   In February 2006 Ann fell from the mainmast almost 50 feet to the deck when the rigging she was working on failed.  The fall almost killed her; she broke her back in 3 places, 9 ribs, both shoulders, punctured her left lung and received a traumatic brain injury.  What followed was 30 days of ICU and 6 months of hospitals and therapy.  In August of 2006 with Ann recovering, we set sail from Bodega Bay to the San Francisco Bay, where we are even now, Ann’s father passed in August and she had to go to her mother and help her out, while that was happening my father passed in September.  In October of 2006 I was diagnosed with stage 4 throat cancer and started an intense treatment regimen to attempt to resolve that, (it worked as I am cancer free still five years after treatment).  .

These events put us once again behind on the maintenance and restoration plan the boat, but having recovered from our ailments and injuries we are commited to sailing on the Pacific Cup as reward for surviving and even thriving through the afflictions that could have deffered us enough to change our plans.

So now it is 2012 and we are finally making seriouse preparations to leave on the Pacific Cup, July 16, 2012.  We have joined up with our good friends Cody and Jatta Sheehy of the S/V Endymion to crew with us to Hawaii. 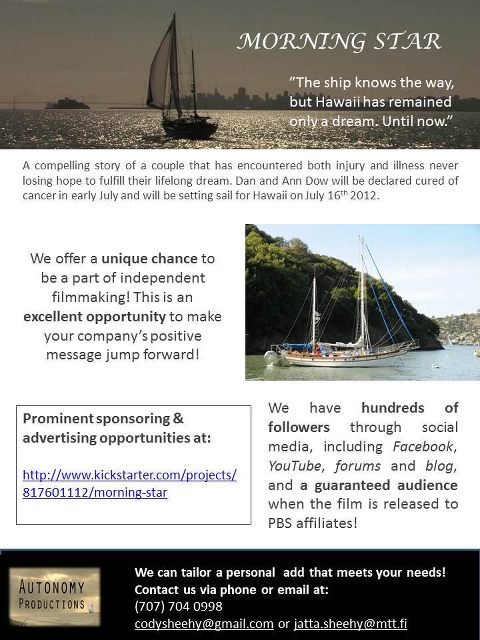 Cody is a PBS documentary film maker and Jatta a doctorial student at UC Davis.  Cody is going to document the entire process of getting ready for the Pacific Cup as well as the race itself.

This is the flyer of the kickstarter presentation that we are trying to raise funding for the cameras and equipment.  I am going to try to dedicate an hour or two every day to this blog and telling our story.

Hope the dream turns into reality!!! Being a cancer survivor myself, I wish you nothing but the best!!! Fair Winds!