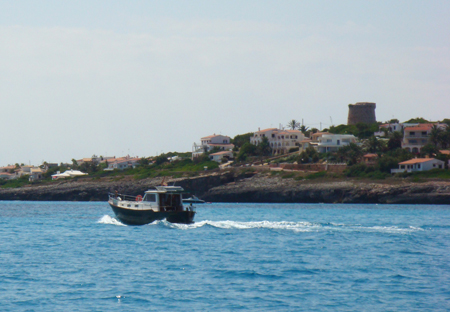 So after a surprise going-away-breakfast organized by Josh and Giulia (now crew on s/v Gray Lady) we left Lagos for the Mediterranean sea. 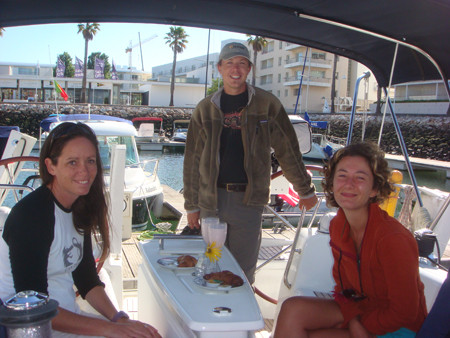 But we were not to leave Portugal without an unexpected visit. This time it was the Portuguese coast guard that decided to board us while we were underway. Unfortunately, the skipper of the patrol boat’s tender was in training and as you can see below, well… let’s just say he could use a few more lessons (and we could use some help cleaning up the marks he left on our stern!)


Find more videos like this on SeaKnots
Once we were cleared to proceed we finally aimed our bows to the Strait of Gibraltar, leaving Africa to starboard and Europe to Port. We were blessed with a favorable current and calm winds; at least until we passed Gibraltar, where 24 hours of Westerlies pushed us deep into Mediterranean waters.


Find more videos like this on SeaKnots
In the news
Our first official stop in Franc’s home country was in a new marina called Puerto Juan Montiel in Aguilas. Our arrival had been arranged by our friend Juancri who made sure we were greeted like heroes by the general manager of the marina as well as by TV cameras and local press eager to learn more about our trip and our cause.

And to top it off, the cava they brought to toast our arrival was from Peralada, the castle where we got engaged seven years ago. How thoughtful! 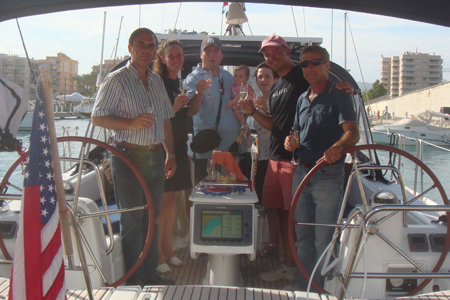 Below is a clip broadcast in the local news that day.


Find more videos like this on SeaKnots
But the real treat for us was meeting the new addition to Juancri’s family: Blanca, who wasted to time in joining our crew and dutifully donned the official Can Drac hat. 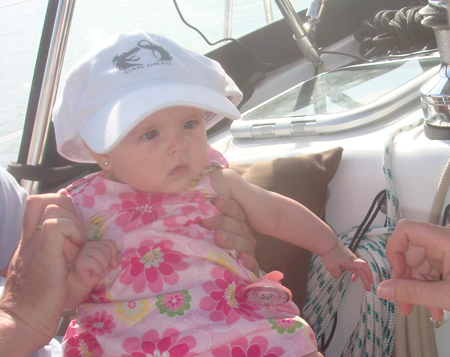 Our welcome was not about to end at the marina, though. Soon after we arrived, Juancri and Lourdes invited us over to their house where Juancri’s mother treated us to a true Spanish home-cooked meal that will be remembered for a very long time. 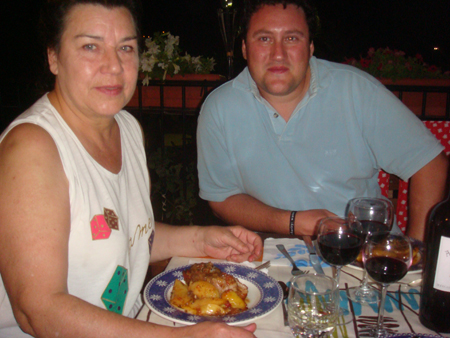 In the tabloids
From Aguilas we sailed (I should actually say motored) straight to Ibiza in the Balearic Islands where we had a chance to meet up with our celebrity friends, stay at their house for a night and eat lobster paella at one of our favorite restaurants in the Med: el Moli de la Sal in Formentera. 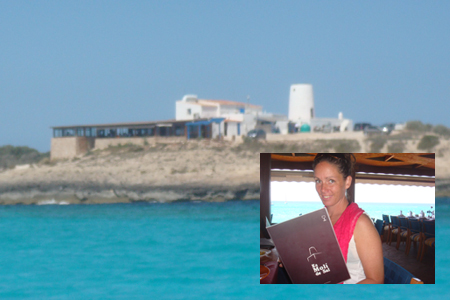 What we didn’t expect was to be caught by the paparazzi. Those guys sure know how to hide because we had no idea our friends were being watched while they sunbathed on our deck. It only took a few days for photos to show up all over the Spanish gossip press. Sorry guys. Next time we’ll find a more secluded cove! 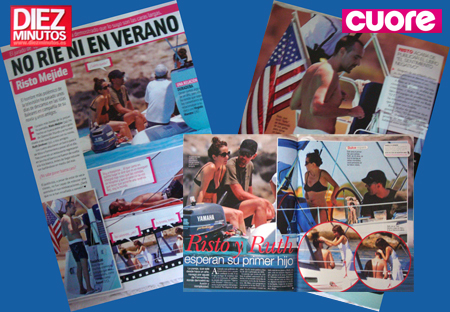 Can Drac goes to the spa
From the Balearics, we took a quick detour and sailed (I mean, motored) to Club Nautic Balis, home of Can Drac’s cousin Drac Blau, where a nice treat was awaiting. Can Drac got to spend some R&R time at the yard getting the hull cleaned, new bottom paint and a thorough engine inspection.


Find more videos like this on SeaKnots
And we got to spend some quality time with family and the friends that came over for an impromptu barbecue. 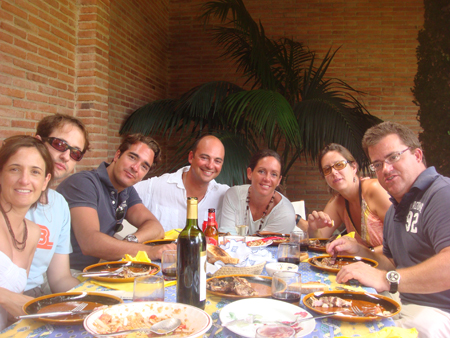 Some even brought us gifts. Just look at Bruno and Natalia’s can of Spanish olives with their own custom art, dragon included! Of course, with Andrea’s birthday just a few days away, there was lots of singing and even a cake in her honor. 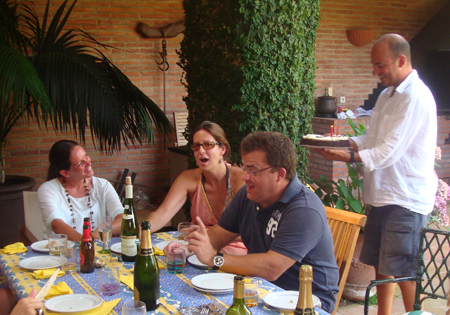 We ended up spending a whole week at Can Carreras in St Vicenç, sleeping full nights (no watches!) on a real bed firmly attached to solid land. 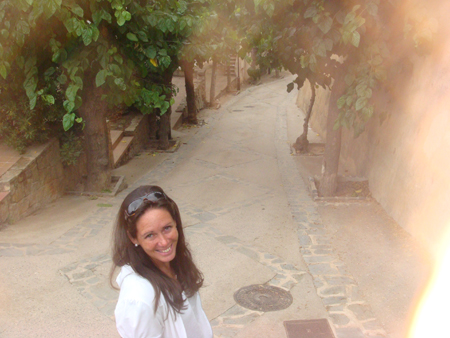 During those days we took some time to provision from the local markets and stores. Take a look at Andrea buying white wine straight from the barrel in Can Figueras. 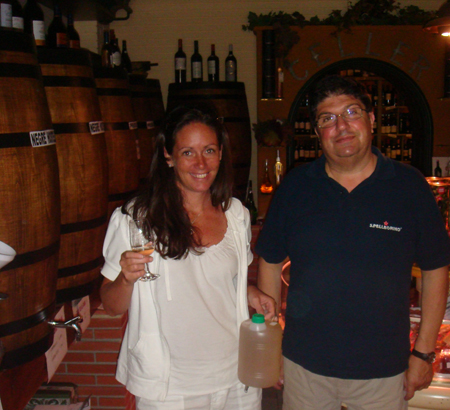 During these lazy relaxing days we also started researching the Italian coast and were able to acquire some valuable local knowledge from Llorenç and Tere from s/v Esprit de Vignemale, currently docked in Cagliari. 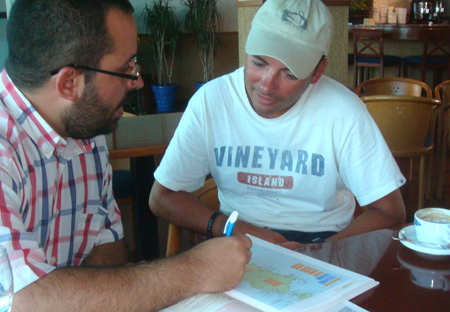 Likewise, a few days later we got even more recommendations from JuanRa and Pili from s/v Paladin, who had just returned from a circumnavigation of Sardinia. Thanks for all the tips and great advice!

Last Spanish port of call: Menorca
Before making the hop to Italian waters we stopped in Menorca, where family friends Freddy and Vicky welcomed us with open arms. This visit gave us the opportunity to give Freddy the gift we had been carrying for him since we visited the Dominican Republic, where he grew up. It was his father’s flute, built more than 100 years ago and recently found by his aunt Manolita in the house where his parents once lived. 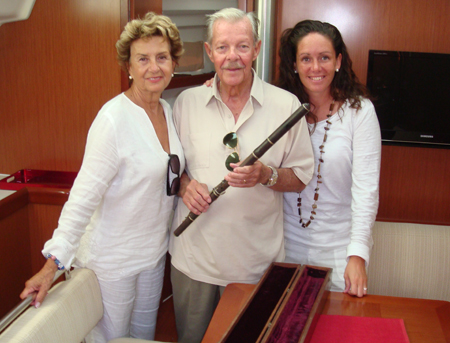 As expected, Menorca didn’t disappoint, its turquoise waters and magnificent coves just as charming as always. But we couldn’t stay long. Italy was awaiting and the weather window was wide open so we said our good byes and left for the first port in a very long time, where nobody would be waiting for us. No Olivier and Fionn from World Cruising Club, no friends or family, no press and of course, NO FISH! :-(

Just a whole new country to discover from scratch! Comment by Juancri on July 27, 2009 at 5:35am
Long waiting to see this MED report, but we know it was going to be worth it all along. Looks like too many things happening on too little time, isn't it? Nevertheless, great vids and photos!!! Love, specially, of course, the one from Blanca wearing the official Can Drac's hat. That's one to print and hook up on Blanca's Bedroom.
We are already looking forward to repeat it again, but a bit more longer; one night was, by far, too short for all of us. So we should be working on organising another visit as soon as possible!!
We are looking forward to read the "Italian Job", sorry!! The Italian Report ;-) !!
Be save and sound and enjoy good winds till the last stop!!!

Hugs and kisses from us all in Lorca!!!!

Kurt updated their profile
Jan 17
ADVERTISE ON SEAKNOTS CONTACT US AT:
candrac@sailforwater.com