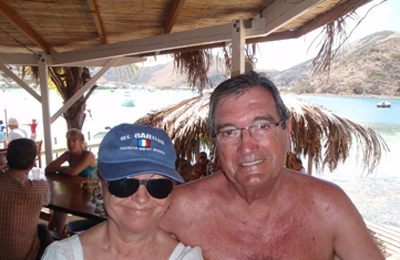 We were lucky enough to find a mooring right in the middle of the Port of Gustavia, which felt like moving into a big square in the middle of a French town. We were surrounded by French restaurants, cafes, bakeries, fancy stores and even two beautiful churches. Lluis and Kika arrived by plane, experiencing the roller-coaster-type landing the island’s airport is known for and even had the heart to video tape it:


Find more videos like this on SeaKnots
Given that our home was so well positioned in the center of all the action we decided to explore part of the island on land so we hopped on a jeep and drove around. That allowed us to get to beaches that would have been too rolly by boat like Saline on the South side. Other than a Frenchman randomly asking Kika to put sunscreen on his back and a couple of nude sunbathers we had the beach all to ourselves.

We then drove to the other side of the island and tried the famous beaches in St Jean bay where we had a fabulous lunch at Eden Rock’s Sand Bar. Both Kika and Andrea opted for the lobster and watermelon salad skewers: an unusual but delicious combination. 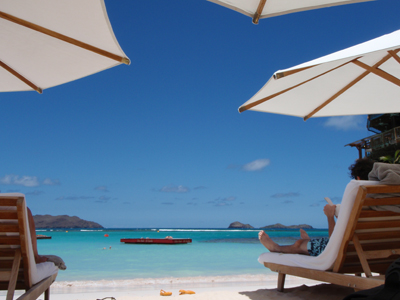 Ahhh, the French glamour… it’s so contagious. Look at Andrea trying on new looks in the most fashionable islands in the Caribbean:

Home away from home
Just like Oyster Bay became our home base in the Long Island Sound when we were in New York, we’ve been finding other “homes away from home” down here in the Caribbean. Those are favorite anchorages we find ourselves going back to when we have to wait for weather or guests. In the Virgins that was the North Sound in Virgin Gorda and down here it’s been Anse Columbier in St Barts. We went there for Franc’s birthday on the way South to Antigua, we came back right before Kika and Lluis arrived and we went there again with them. This time we were in the company of the Maltese Falcon (again!). You know you are in the right place when the largest sailing boat in the world chooses to anchor right next to you! 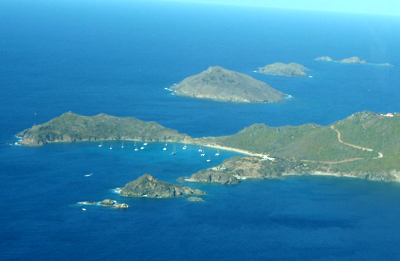 Mega yachts aside, most of Anse Columbier’s beauty comes from the cheerful company of its turtles. Below is the one that was guarding our mooring. You can feel safe when you know the locals are watching out for you. But the trait that makes Columbier so special is the view of the sunset. As you can see below, Lluis almost filled his camera’s memory card with hundreds of pictures taken from the stern. 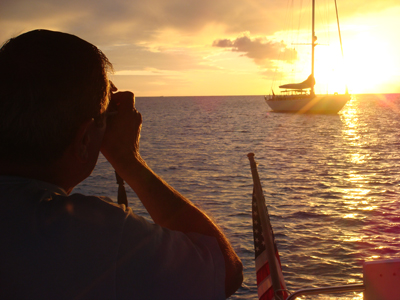 Of course, the highlight of that night was again, Andrea’s cooking. This time it was a cero fish we caught on the way from Antigua. Getting cheers from two gourmet connesuers like Lluis and Kika right after having tried the best French restaurants in St Barts is no small feat and Andrea truly deserved the praise. From one French island to another 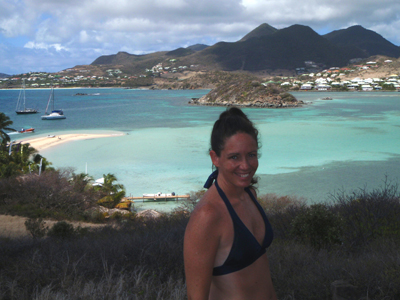 Another favorite anchorage for us was Ile Pinel in St Martin. Despite being shallow and only big enough for a dozen sailboats the small island is a real treat. 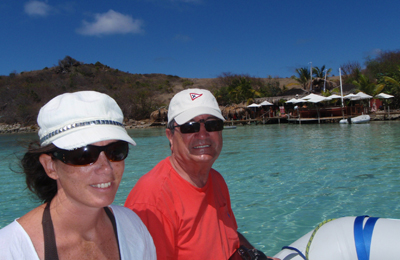 Lunch at Karibuni gave our guests a taste of a true Caribbean beach joint. Hey, looks like Andrea is not the only one that screams at the sight of live lobsters kicking around in her proximity! 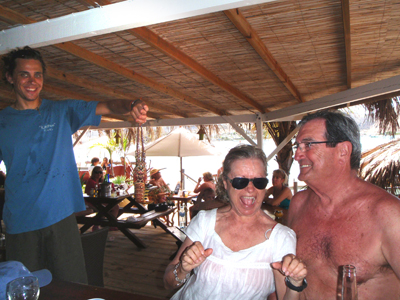 The swimming and diving was also superb there, with crystal clear warm waters. Watch what Andrea was doing while Franc was scrubbing the growth below Can Drac’s waterline. 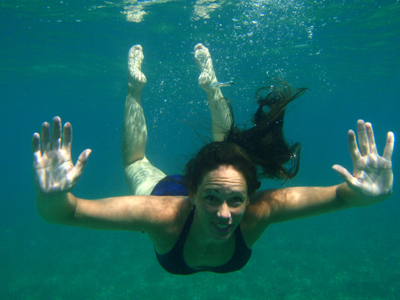 Our next stop was Grand Case where we struggled to find a place to watch the FC Barcelona soccer game. After an endless walk in the mid-day sun we ended up finding a Portuguese bakery with some locals willing to let us watch it in their company. Presidente beers in hand (it was really hot in there!) Franc and Lluis cheered as if they were in Barcelona’s Nou Camp. What a game: 4-0! Definitely worth the effort it took to find a TV. 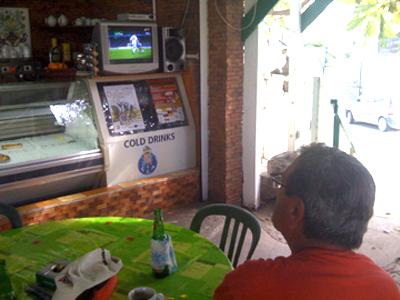 And now, as we say good-bye to Franc’s parents we know we are going to miss them. But soon, Andrea’s sister and her parents will also join us so we have that to look forward to. 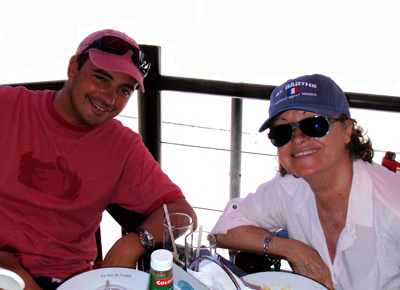 And that made us think about those who travel with family but with a different purpose. Water. Our trip is dedicated to those who do not have access to safe, clean water and have to travel miles and miles every day to get it. So far we’ve raised just under $5,000, which is close to what’s needed to build a well that will solve that problem for a whole community. Why not be the one to help us cross the $5,000 line and get closer to our goal? Make a small donation today and make a big difference that will last a lifetime!