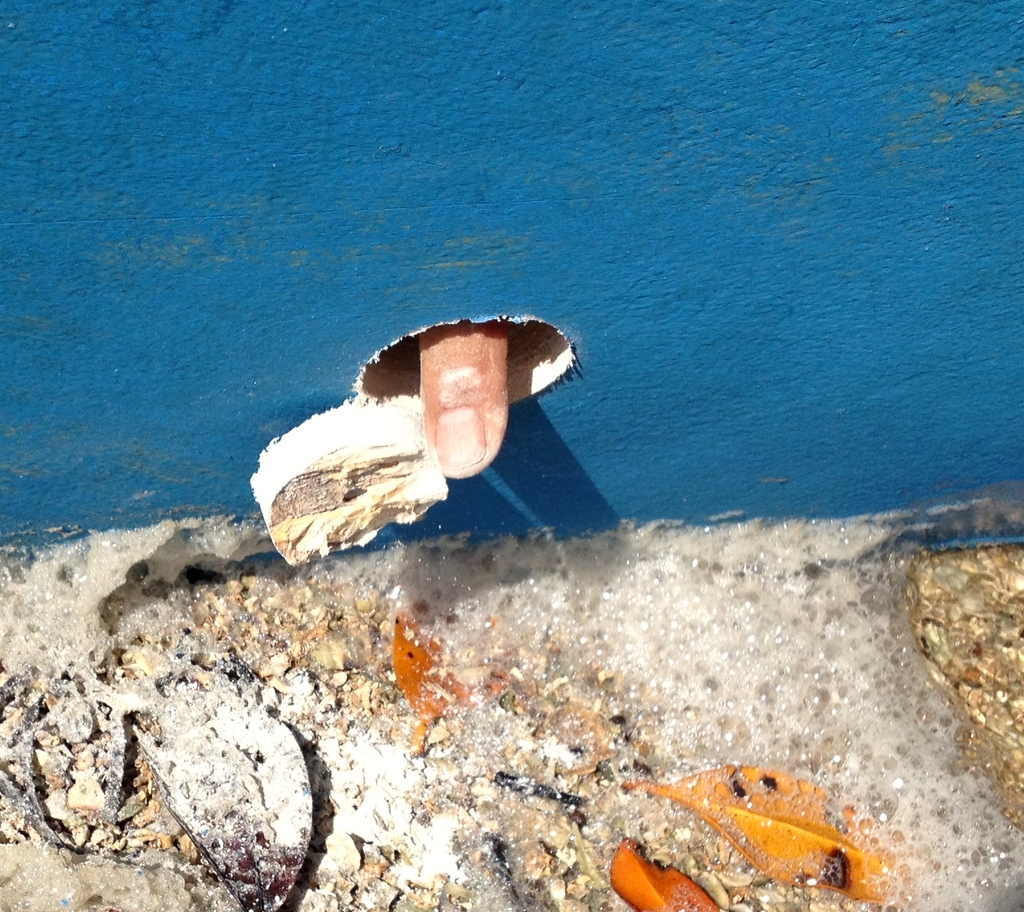 After much consternation, the chillaxin phase is over. Time for work. This past week had my mate and I engaged in painting the deck, improving his newly built rowing dinghy, and putting two holes back in the boat.

The deck painting was needed. Like a car there comes a time when no matter how diligently you wash the exterior, vacuum the interior and scrub the wheels, the lustor just doesn't shine through. SPRAY's deck had morphed into a workroom floor. Drippings of resin, paint, and bird poops were beyond reproach. A few months ago I felt embarrassed to show off SPRAY to a visitor. It was a shocking revelation that I could ever feel sad over my proudest investment. After a week of painting, buying one quart a day, SPRAY's deck brightens the sunny days and sparkles in the moonlight.

The rowing dinghy was needed. After a year of rowing about in my 8 foot Walker Bay, we conceded. A slightly larger, more floaty, and weight accommodating rower would make life more pleasant. The debate over buying a ten foot Walker Bay versus a home built was easily decided. How could I refuse an offer for a custom built rower by an experienced boat builder? His old rowing dinghy would serve as a mold for the new one. Not having to create a mold was the icing on the cake. And so, as this sunset picture presents, a beautiful addition to our cruising/fitness program was born.

Putting two previously plugged holes into the bow was the painful task. This stems from an old fear triggered by a history of inattentiveness. Back in June of 2011 when I first boarded SPRAY, the stank and sight of the head remains a constant reminder of neglect. Not only did it smell of disgust, the toilet was covered with brownish green mildew and who knows what. YUK, I immediately informed my boat surveyor that if I were to buy this boat, that thing would be the first to go.

About six weeks later while bringing SPRAY home from Guatemala to Palm Bay, Florida we had an emergency haul out in Rock Harbor. Aside from replacing the worn out cutlass bearing the priority was to get rid of the existing toilet. The small tupperware type square plastic tub previously used as the holding tank had been tossed before I purchased SPRAY. It was one of those tasks I took the liberty of doing when I first saw the boat.

Relying on my attention deficit and limited understanding of how mechanical things work, I feared having the thru hulls remain. If I was going to get a compost head there would be no need for water to be flushed in and poopy, pissey remnants to be flushed out. "What if I inadvertently turned the Y-valve to the open position? Yikes, water could come in." Despite the pleading, reasoning, and convincing of my hired Captain/Maintance crew, I insisted the thru holes be removed. "I don't want holes in my boat!" was my stubbornly insistence. So, being adequately compensated for their work, the captain and crew removed the toilet, then plugged the holes.

A year or so later the compost head was an upgrade from the bucket. Another year and few months later, the compost toilet has been thoroughly cleaned.  It is being stored for the yurt I plan to build one day.

After the deck was painted and the rowing dinghy passed the splash test, it was time to re-drill the hulls. Two new thru hole widgets were installed. It was an interesting endeavor. SPRAY was perched on the Sandbar at Indian Key which is just west of Everglades City a mile or so before the Barron River empties into the Gulf of Mexico. Under beautifully sunny skies during the day and two starry nights, we luxuriated in the wonderment of it all. With the thru hulls securely in tact the new toilet is to be installed. But before weighing anchor yesterday morn for the sail back to the dock, we bid our last overboard poop adieu.