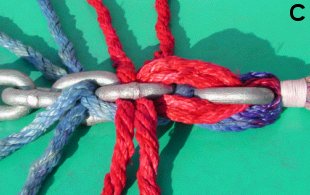 Down to the marina early Friday morning to get started with boat chores.  First big effort was to remove a seriously rusted shackle from my secondary anchor rode.  I took it up to the marina’s shop to use my drill and cutting wheel to slice through a chain link as the shackle was so badly corroded that I couldn’t dismantle it.  Once that project was finished I carried the twelve feet of chain back to the boat and got busy splicing the remaining rope rode to the main anchor chain.  I had to cut some of the old line off because it was showing some signs of wear and the one thing I don’t want to do is use any thing marginal on my ground tackle.

I used a different rope to chain splice then I’d seen done before.  Instead of using a thimble and back splice I wove the three strands of the line up the bitter end of the chain passing the first two strands through the first link in opposite directions, the third strand through the second link, then two strands through the third link, and so forth until I had a couple of feet spliced in.  In researching rope to chain splicing I was looking for a method that avoided the shackle because that had been a big part of the problem when we lost our anchor on Memorial Day.   Likewise, I didn’t want to do a back splice using just the last link in the chain because I figure that the strands would be subject to a lot of chafe and it would be a thick mass to feed through the anchor windless capstan.  Alain Hylas is the inventor of the Spade anchor and of the elongated splice.  He calls this splice “the only safe way to connect anchor warp to anchor chain.”

At any rate, it took a bit of time to weave all the strands through the links sitting up in the forward cabin in ninety plus heat sweating buckets.  I must have downed five bottles of ice water while working on the splice.  Good thing the boat has a refrigerator.  My old boat just had an ice box and that sucked.  Having a 12 volt refer is way cool and seems to work just fine with just the solar panels keeping the batteries up to charge.  With the anchor rode all set up I went up on deck to put the 44 pound anchor up into the anchor roller on the bow.  I had to use two shackles to attach the chain to the anchor because the shaft on the main anchor is an inch thick so that took a large shackle, and I needed a smaller shackle to go through the link in the chain, hence two shackles, however, the hole in the anchor shaft where the shackle pin goes through needed some work because it was rough and I couldn’t get the pin through.  So there I was sitting in the hot sun hand filing the hole in the anchor shaft until I could get the pin through.  More ice water consumed.  So after I get all the pieces together I move the boat forward in the slip by slacking some lines and tightening up on others so as to get the bow over the dock.  I ease the anchor around the forestay and angle it a bit to slip by the bow pulpit and bow light to rest on top of the anchor roller.  Then I clamber off the boat to the dock and pick up the anchor off the roller to ease it out and then back to settle it into the roller.  I know, this sounds confusing but when dealing with heavy metal it can be a bit aggravating.

Back aboard I go searching for the roll of stainless steel wire I need to seize the shackle pins.  I know I have some, but where did I put it?  After searching through all the lockers, containers, and tool bags, I realize that what I thought was wire was just my imagination; I’m not admitting to being wrong, you understand, just to being crazy.  So I’m off to the hardware store to get some wire.  Back at the boat I get busy securing all the shackle pins with wire and finally the job is done.  I press the anchor windless button to snug the chain up, attach the chain stoppers and everything is cool.  Now I have to finish putting together the anchor chain snubber.   I’d had made one up when we first got the boat, but I only had one chain hook and that would fall off every once and a while so I figured I put two hooks on and it might work better.  I’m thinking ahead to the possibility of having to anchor out during a hurricane so I want everything ship shape in that event.

I got some good news from BoatUS about my insurance, seems that because of my vast experience with boats they reduced my premium by about $300.  I wish my house and car insurance company would do that.  All they do is raise the rates every year.  Same thing with health insurance; seems the state raised the rate by 5% but they gave us a raise of 1% so I just lost a little less income instead of a whole lot.  Go figure.