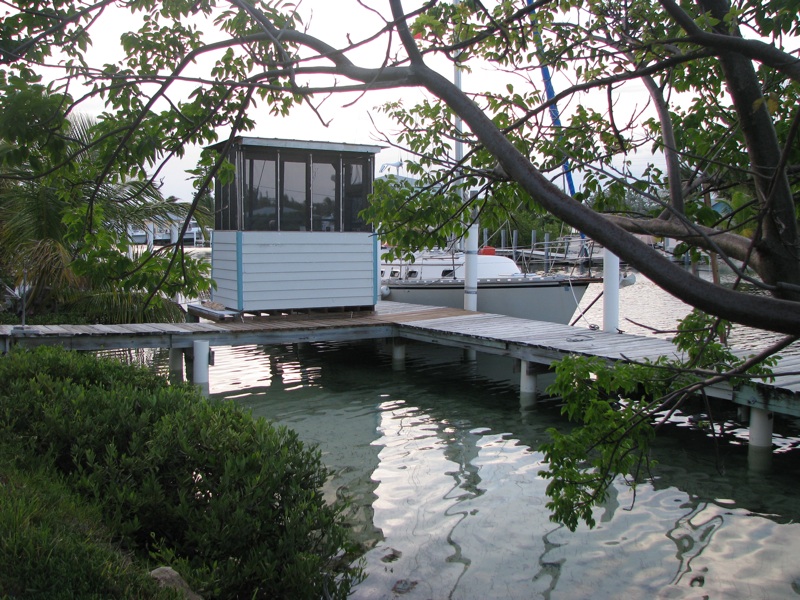 I met a fellow today who told me that Tropical Storm Fay is behaving just like a woman – she just won’t leave us alone.

Then I got an email from a dear friend today who wrote, “The world assumes you made it home safely…..”

I’m not sure I know what that means, “just like a woman,” but I’m afraid I’ve done a quite proper job of leaving “the world” alone. And this is the second time. It’s easy to write about my travels when I’m out there, but it seems that every time I return home and find myself back in the familiar rut, I stop posting to ye old blog. Or maybe that is just like a woman with all that teasing build-up, but no big bang of a finish? Anyway, this time I intend to wrap it up, look back on my weeks of sailing solo in the islands, and deliver some sort of a (albeit late) climax.

I must admit, however, that my voyage back from Bimini, across the Gulf Steam was a bit anti-climactic. I wound up staying at the dock of some friends who own a home on South Bimini (see photo above), and I went aground entering their canal. My friend Owen (who had come to help me find the channel) and I sat there on the bottom for over an hour waiting for the tide to rise. Once I heard that he was coming along, I stopped worrying about the navigation and I learned a valuable lesson – check the tides even if you have a pilot.

Three days later, I left at daybreak, at near high tide and motor-sailed across the stream in 5-10 knots of wind. I was headed for an anchorage off Key Biscayne where I was to meet friends for the Fourth of July weekend. I made good time and found myself six miles off the Miami entrance buoy when the city disappeared in a pitch-black squall. I shifted the radio over to the Coast Guard weather station and they reported current condition in Miami Harbor as 40 knots of wind, gusting to 55. I cupped my chin in my hand and I thought, “Hmm… I guess I’m not going into Miami.” The squall was reportedly moving toward the NE, so I headed south down the coast toward the southern channel south of Key Biscayne, figuring I would spend the night tucked into No Name Harbor just inside Cape Florida. I tried to outrun the squall, but when it was obvious it wasn’t going to happen, I dropped all sail, put on my oilies, forced the dog below, put in the drop boards and tied my harness to the helm. And I held on.

It got rather exciting for a bit. I wasn’t sure which was worse, the howling wind or the howling dog protesting at the indignity of being left below.

When it finally let up, I made my way into No Name and called the Homeland Security/Customs folks only to get yelled at over the fact that my passport had expired while I was gone and the fellow grew apoplectic when I said that I couldn’t imagine it really mattered when a couple of weeks before the thing had been perfectly good. That whole mess ended up with a decree that I had to present myself to officials in the Port of Miami within 24 hours or else. He never was quite clear on what that was, but the next day I motored around to the Miami Yacht Club anchorage and made my way to the officials and was dutifully contrite and I was granted access to the land of my birth after all. Looking back now on the six-week trip through the Abacos and back, one remarkable point stands out in my mind. There are lots of male solo sailors and hardly any females. As it turns out, I just about had a guy in every port, so to speak. Well, not in the Biblical sense, mind you, but I enjoyed the pleasure of their company over drinks, dinner, just chatting, snorkeling, hiking, or talking over many a glass of wine under the stars. There was Richard in Green Turtle, Todd in Marsh Harbor, Alan #1 in Hopetown, Alan #2 in Little Harbor, and Wright at Lynyard Cay. I think this is the greatest and best-kept secret about sailing solo. I really do love the company of men and having somebody to hang out with – and I met such fascinating people who had wonderful stories to share. Solo sailing isn’t all about solitude, although there certainly was lots of that. For me, it was about meeting new people and making new friends - and okay, I admit it, a free meal now and again.

So now my boat is tied up back at the city marina on the River in Fort Lauderdale, and the rain from the remnants of Fay is pounding on the cabin roof. This week I started back teaching my college classes. I haven’t yet finished my novel, but I’m working on it. Most days now when I drive to work, I dream about taking off again next May, sailing solo to some more distant anchorages, and just like a woman, I wonder what new fellas I’ll meet when I arrive.

Comment by ___/)ances With Sails on August 23, 2008 at 11:49am
I think we give things a name due to their(its) invidualtistic personalites they(it) stores. Personalities are to be desired and each complex system deserves it right to exist as the elements/vitals so effect it. Respect complex things and give each its place. Live and let live.

Comment by Aria on August 23, 2008 at 6:22am
I doubt that I'm alone in waiting for your blog posts. Always a good and interesting read.