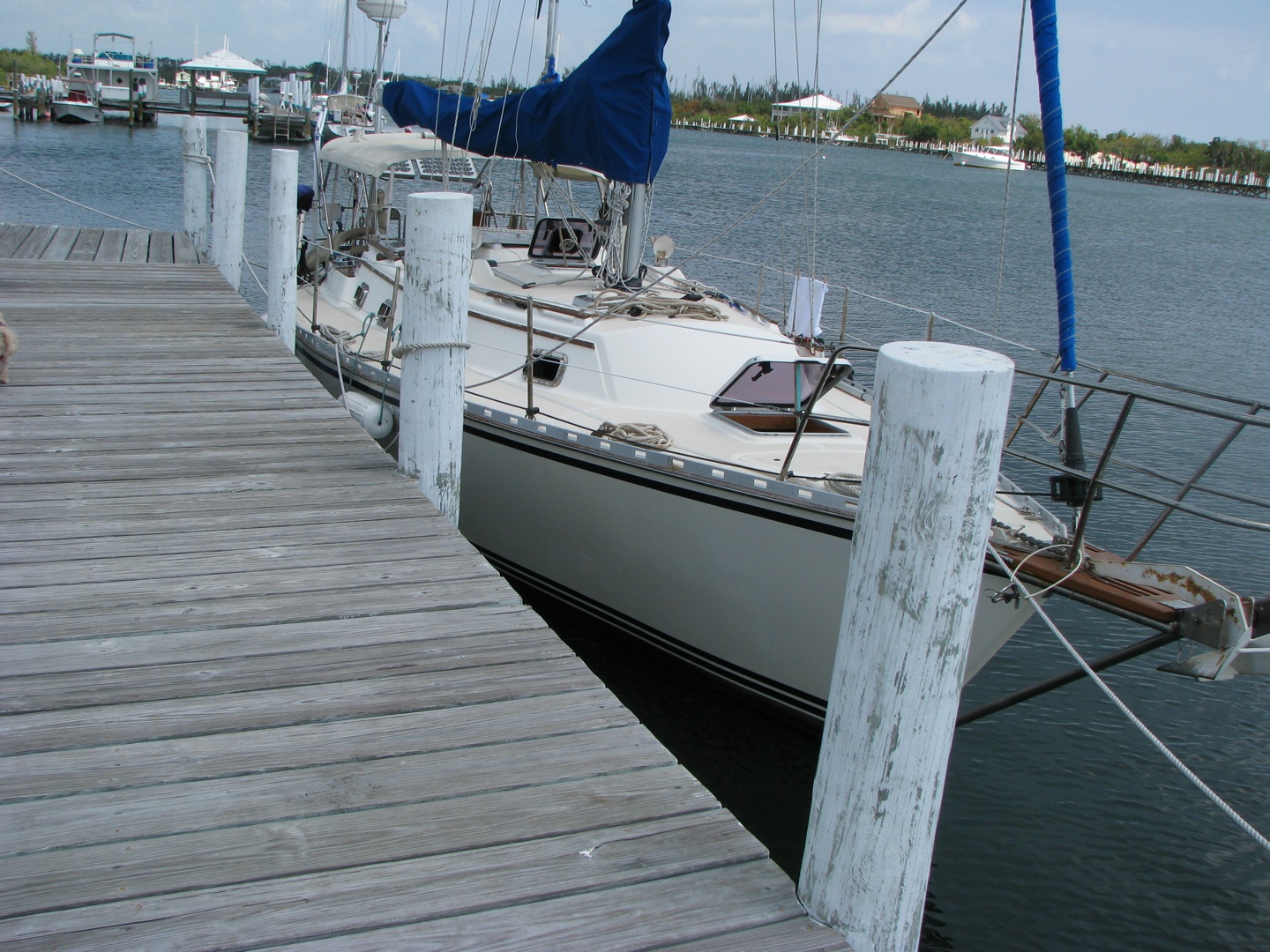 Most sailors would think I’m talking about the barometer when measuring the glass – or perhaps a measure of rum, but in fact, I am talking about one’s perspective on life, and getting stuck waiting for George, the mystery man at Green Turtle Cay. I could see it as a problem, but in fact, it has been one of the best things that could have happened to me.

Life in a small island community is a mysterious thing to a big city gal like me. The relationships and the intimacies in such an environment are unknown to folk in the South Florida fast lane. There are some 500 residents here on Green Turtle Cay and they all know one another. The boaters and fly-in tourists, people like me, are the outsiders. However, most people, George included, make their living off the people like us. I’m sure that if I had a 75-foot fancy yacht, I would have seen my mystery man the first day here – and I would have been handed a bill that fit that stature. However, my little 33-foot boat is easy to overlook. So easy, in fact, that for the 6 days I have been here I have come to feel like I am invisible.

The first relationship I have made is with Eddie, George’s assistant. Monday morning a cold front had passed over us, and the temperature was in the low 70’s. I was wearing a sweatshirt and when I saw Eddie, he was wearing long pants, a big jacket and a straw hat. I told him that I was worried that my boat was dying, the batteries were bleeding out, and I couldn’t start my engine to charge them. By afternoon he was there and he found the issue was merely a bad connection in the digital battery monitor. The batteries were good, just the meter was bad and he fixed it. Later, he brought me a bunch of tiny sweet tomatoes the size of marbles, each on its own green stem and I made myself a delicious salad with them that night. He has since brought me another batch of them, and I am rich in fresh mini-tomatoes these days. Now my only other problem is the engine start switch which sometimes works and sometimes doesn’t and I am determined to stay until it is fixed.

So go my days, I get up in the mornings and make my coffee and walk my dog. The island has such strong scents of salt and brush and morning wood fire smoke. The roosters crow and the local parrots squawk and my dog and I explore the back roads and trails around our end of the island.

Then it’s back to the boat for a day of writing. I work until 4:00 or 5:00 and most of the time, I simply take another walk, but yesterday, after days without much human contact, I decided to run the dinghy and make a visit to the bar at Coconuts. I met for the second time the bartenders – Yvonne Big Dog and Beryl. And there I met Sybil – the other female singlehander in this place. She had electric blue eyes and a knowing smile. She had just finished hauling her boat out at the yard across Black Sound and she was preparing to leave by plane in the morning for her other home in Boulder, Colorado. She was there with a fellow who was a yard manager and the two of them spoke so intimately of the local folk – who was a cousin to whom, and who was a Cooper or a Curry – and woe be to he who mistook the two. She has been coming to winter on her boat in the Abacos for four years now, and I found myself envying her that lifestyle. She bought the three of us a couple of rounds and we shared Conch fritters and Jerk chicken wings, and I sat back and listened and learned. Maybe, if I get to spend the next few years visiting these islands, I will be accepted as an almost local like Sybil.

Today, Wednesday, I tired of peering out the ports looking for George and I decided to go out to lunch and I leashed the dog and headed to the other local eating spot that has outdoor dining – The Wrecking Tree. Chip and I enjoyed a Conch Burger and grapefruit juice whilst watching the local 6-8 guys work on a truck across the road. A half dozen or so dogs came by to sniff at Chip and we probably watched another half dozen golf carts full of bright red tourists pass looking for something to do. The pace on an island like this is most definitely slow and it’s only when you get stuck on the end of a dock for days at a time that you can begin to slow down enough to appreciate the beauty and kindness that such a place exudes.

Back on the boat tonight, I was sipping a glass of wine when a boat approached from the entrance to Black Sound. There was one man on board, his long blond locks flying in the strong easterly breeze. He tied up to boat not 10 feet away.

“Hi” I said to George, the mystery man.

“How are you doing?” he asked.

I had thought that once I saw him, I would be desperate to get him to work on my boat, but suddenly, I realized that his absence had been a gift. I didn’t have four years to get to know Green Turtle Cay, but he had given me a week, and I had come to love the place in that time.

“I’ll be down to look at your starter tomorrow. I’ve been off-island looking at a boat down at Spanish Cay.”

I watched as the blond, bare-foot mystery man walked up the dock toward his house and I realized that I didn’t really care whether it would be tomorrow or sometime in mid-June. Getting stuck in Green Turtle Cay had just changed from a problem – glass half empty – to a treasure – glass half full.

Comment by Richard on June 13, 2008 at 2:58pm
The big sailboat was named Shogun and was 176 feet long. After I took the picture I sent it to the boss in Ohio with the title "Here's Jolie Aire tied up along side a real sailboat."

Comment by Banana Wind on June 13, 2008 at 1:35pm
Its hard to fathom a sailboat that large ..but we know there are some in the world that will dwarf the biggest one in that picture ...still, what a site that must have been at the time!

Comment by Christine Kling on June 13, 2008 at 7:04am
Richard,
Your photo reminds me of the days when I was married and my husband and I ran a 55' crewed charterboat out of St. Thomas in the early 80's. Even back then, ours was one of the little boats in the fleet. But I've never been to the French Riviera by boat. The Med is on my dream list! 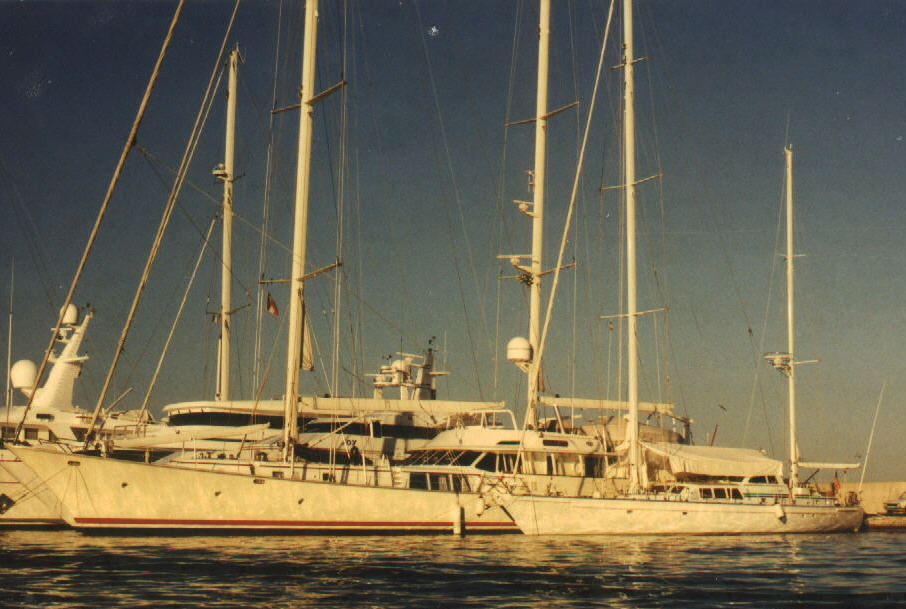 I just stumbled upon all the stuff you've recently posted. What a delight!
Want to feel insignificant and insecure about the size of your boat? (Who said it's only men who have "size" issues) here's a picture of the boat I ran on the French Riviera. Keep this in mind when you look at the picture. MINE is the SMALL boat in the photo.

Comment by Banana Wind on June 1, 2008 at 10:19pm
I must say ....it certainly seems like your truly great writing skills prevail here in your everyday writing ....we all sit here ..anxiously awating the next report of your glass more than half full ....

Comment by Pam on June 1, 2008 at 10:14am
Hi Chris - looks like you are definitely settling into island time. I did a catamaran sail last evening with some of my dive buddies and had wondered how things were going... and from your blog - it all looks wondeful. fair sailing. Pam

Comment by Aria on June 1, 2008 at 9:00am
Expectations, perceptions and intentions all too often obscure what is right in front of us, giving us a sense of disappointment and a promise unfullfilled. And all too often, all that is wrong, is our perspective. Good for you for seeing it.