Sicily, the Aeolians and the search for family roots 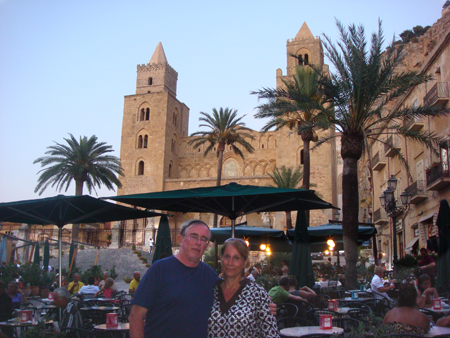 It’s been two weeks for us on these beautiful islands in the South of Italy. Two weeks of flat seas, blurry horizons and the strongest heat we’ve experienced so far on this trip. 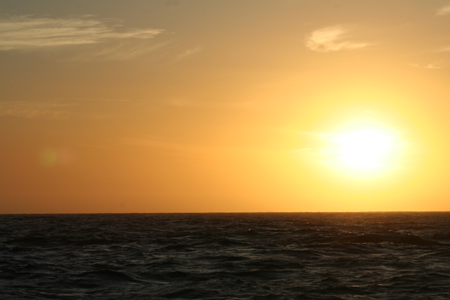 Ever since we arrived the passages have been short and we’ve had plenty of time to cool off by swimming and relaxing just like ever other European on vacation. 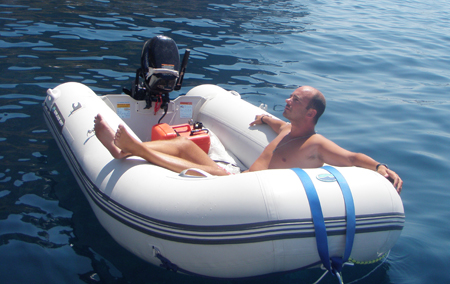 Searching our Italian roots
For the last week, we’ve enjoyed again the company of family: Andrea’s parents (special thanks to Lu for her help organizing their arrival from Palermo!). With them, we went in search of relatives of Andrea’s grandfather, born in Patti, a small town by the water in Sicily. 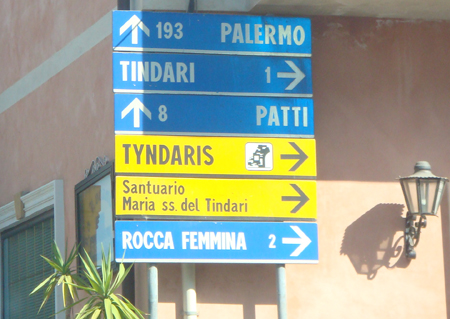 To our surprise, the day we arrived was the celebration of Santa Febronia, the patron saint of Patti. Because of that, we were able to participate in the annual procession that carries the saint’s statue and relics all over the town.

The following day, Father Enzo, the priest in charge of the Cattedrale de San Bartolomeo was the first to help by diving into the church’s records for wedding or baptism records. Our search also took us to the cemetery where we think Andrea’s great grandfather is buried. However, the cemetery records didn’t go back far enough. 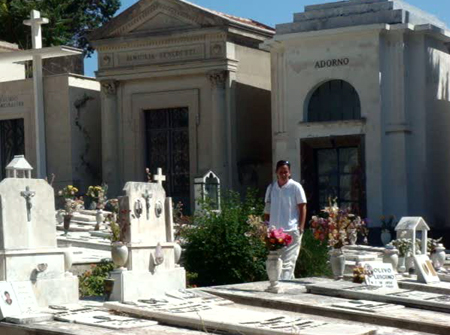 So from there, the priest took us to city hall, where the secretary of the mayor led us to the city archive for further research. She even took it upon herself to call every resident sharing the last name until she can find a distant relative. 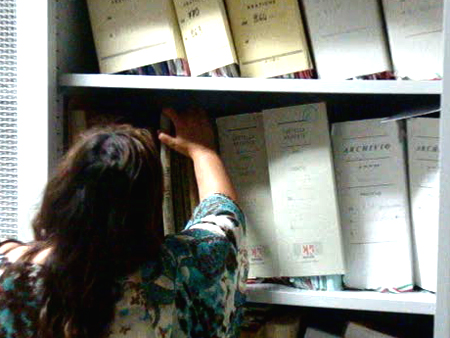 That’s when we learned that Andrea’s maternal last name is indeed, originally from Patti so it wasn’t hard to find others sharing it. Here, Andrea and her mother are posing next to two guys with the exact same first and last name as Andrea’s grandfather. One person in particular was very interested in our search. His name is Nino and he owns a pizzeria, focacceria and hotel by the water. After sharing our family tree with him he was convinced that he knew a distant cousin of Andrea’s mother and is trying to get in touch with her now. 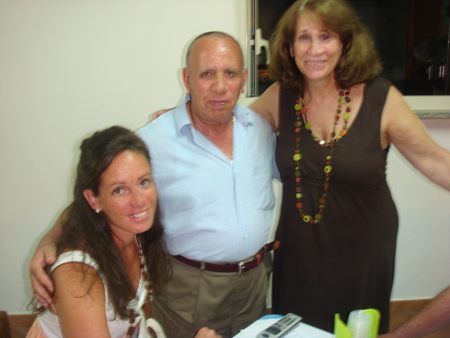 So we haven’t yet found the direct descendants of those in Andrea’s family that stayed in Italy when her great grandparents left for America but we have three new allies in our search. 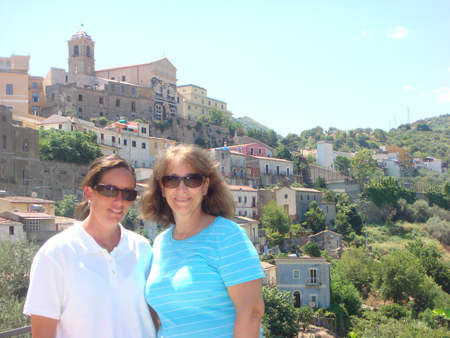 What we know is that this will clearly not be the last time we visit the town that bears the Italian roots in Andrea’s family. Our search for family history has just began.

While in Patti, we also took the time to do some provisioning in the local stores, some of which have been around for many years. Luckily, the fruits and vegetables hadn’t and were fresh and tasty like nothing we’ve tried before. 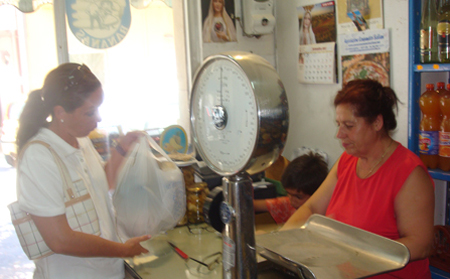 Escape to the Aeolians
After a few days on land we were eager to get back out on the water. This time, we chose the seven islands just under 20 miles off the Sicily coast called Aeolians. Careful to avoid the hydrofoil ferries so popular in this area, we made our way to Lipari, the main island in the archipelago. We anchored right in front of the center of town, which is filled with small local fishing boats, just like it's been for decades. 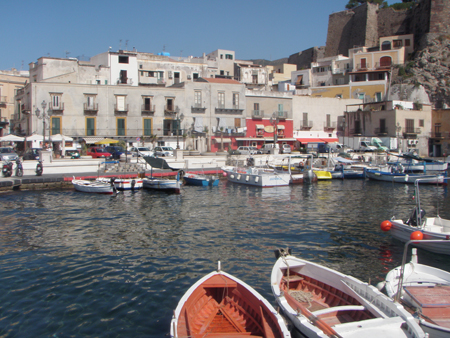 There, we found a nice little restaurant off the beaten path with a nice terrace, excellent pasta and fresh fish. 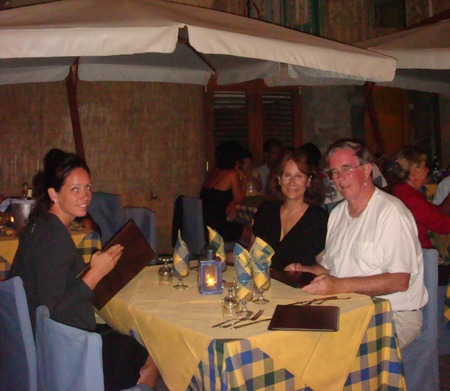 Volcanos and jellyfish: up close and personal
One of the most amazing sights of this impressive set of islands is Stromboli, apparently the only active volcano in Europe right now. Stromboli’s last eruption was only two years ago, but every 20 minutes or so, a burp of smoke can be seen coming off the top. Not the most comforting feeling when sailing by on a slow moving sailboat… 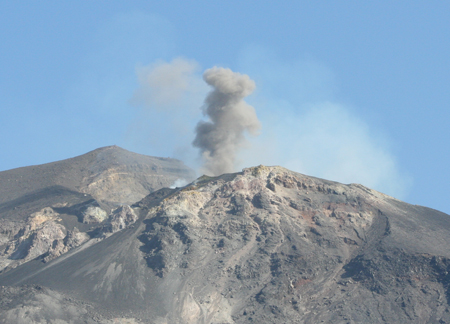 The rock formations in these volcanic islands were nothing short of spectacular. Right behind that perforated cape in Salina we found one of the most beautiful coves in the Mediterranean. 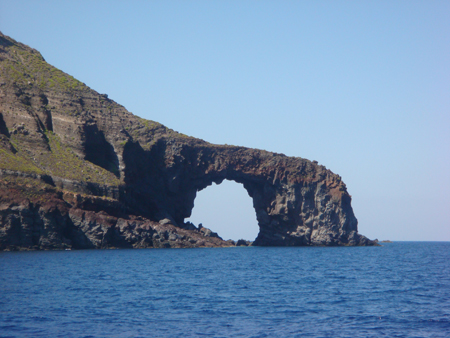 The cove at Pollara, of the movie “The Postman” fame, still has the small storage space for local fishing boats with ramps going out to the water that have been used for hundreds of years. It also has some long-tentacled friendly residents ready to give you a stingy hug if you get close enough! But of course, that didn’t deter us from jumping in the water and swimming in those transparent turquoise waters. As long as we kept a careful jellyfish watch, the danger was manageable. 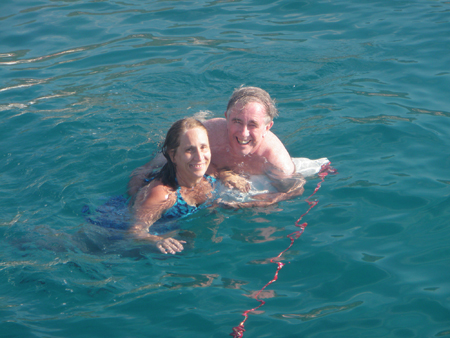 Cefalu, true Sicilian charm by the water
We chose the quaint coastal town of Cefalu as our final destination in Sicily for its charm and proximity to Palermo and its airport. 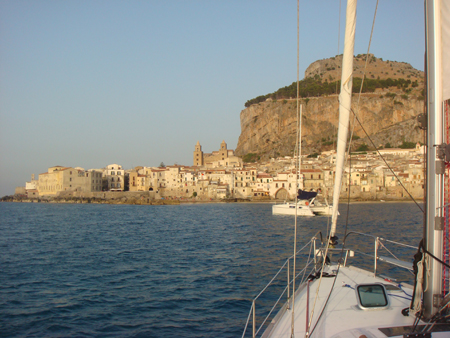 We already made a stop in Celfalu on our way to Patti. But no matter how many times we come back to this town, we always find something new to admire in its narrow streets and friendly people. 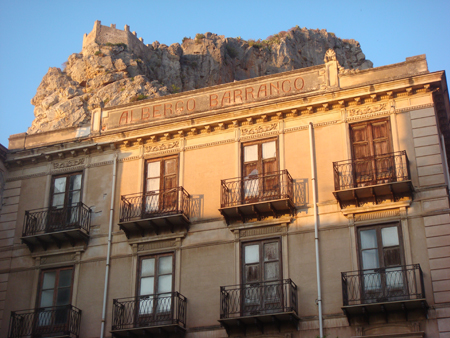 When Andrea’s parents left us on their way to exploring Rome and the Vatican, our new guests were already on their way, so off we go on our new sailing adventure with them. Destination: Sardinia. 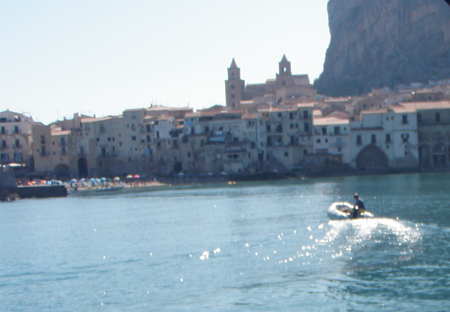 Comment by Stephen Phillips on August 6, 2009 at 8:10am
Hi Guys, We are now in Port Vell, Barcelona, slowly heading to Morrocco and then to winter in Lagos, Portugal(9 month contract). Glad to read that you are having a great trip. Hope to catch up with you on your way back West. Happy Sailing.