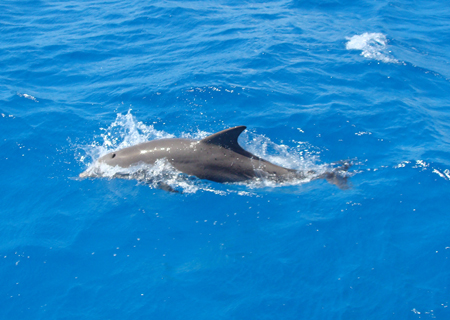 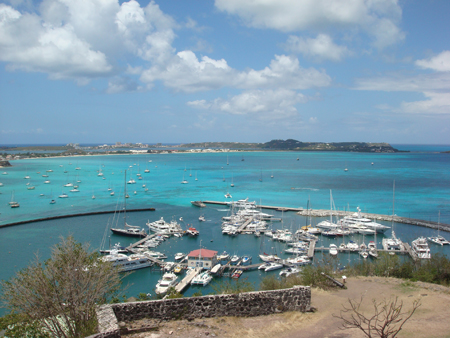 We spent Easter weekend in Marigot, on the French side of St Martin and attended a local church on Easter Sunday. 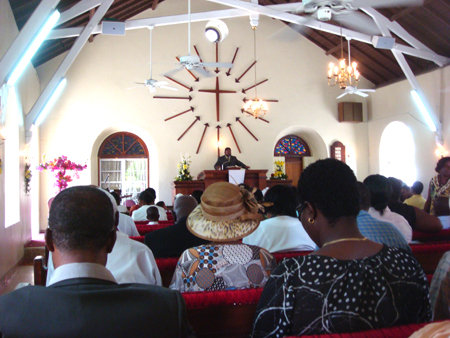 It was also in Marigot that we finally met up with our mentor in full-time cruising. Michael, owner of the 57 foot Splendido, who was also on his way North in the company of Jeremy, his full-time Captain. 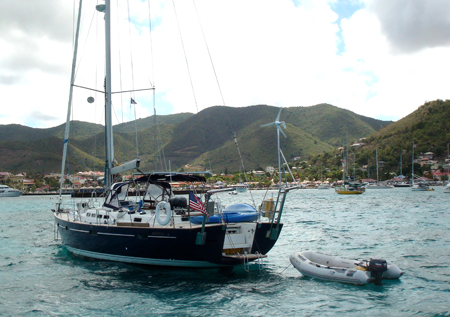 Michael was the one that shared his first-hand experience and patiently answered all our questions during the outfitting of Can Drac. He not only provides us with useful advice and valuable recommendations but also with great inspiration. He was also the one that introduced us to Tni and David, from S/V Rosario, who followed almost our same course just two years ago on a very similar boat so we have a lot to be thankful to him for.

You can see Michael and Jeremy in their favorite hangout in Marigot: the best French bakery in the Caribbean. 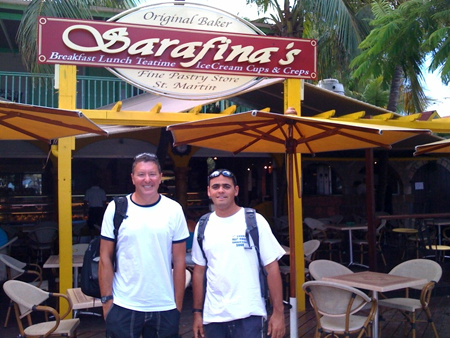 And you can see Jeremy climbing Can Drac’s mast and signing the article he wrote for Crew Life magazine. Go Jeremy! 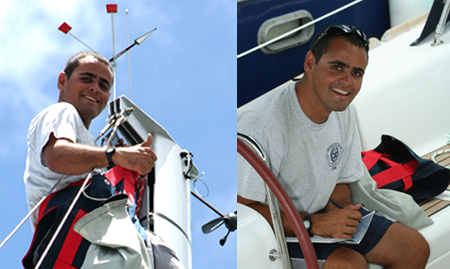 Of course, Splendido is never complete without Daniel aboard so we are very much looking forward to meeting up with the whole crew later on this month.

Read more about Splendido’s team and their charters by checking out their SeaKnots page here.

We’ve really enjoyed the French islands in the Caribbean despite their particular and unusual habits. We’d never seen a marina that closes for lunch, for example. Try to find help to dock stern-to sideways to the trade winds at a French marina at 1pm and you’ll know what we mean.

It was also surprising to learn of the new policies at local supermarkets. Using the protection of the environment as an excuse they stopped using plastic bags. But instead of replacing them with recyclable paper bags or any other green solution the only alternative to bringing your own bags is buying theirs for $1 each. Sounds like a cost-cutting/revenue-generating scheme at the expense of the environment!

Of course, their cheeses, baguette bread and fresh croissants more than make up for those idiosyncrasies so we decided against a boycott of French supermarkets, for now. 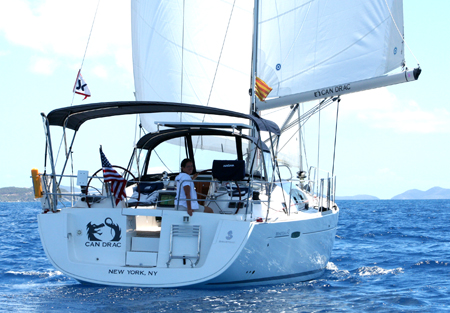 Our sail was short and pleasant and mostly downwind. The biggest surprise was seeing our first pod of dolphins since leaving Florida. Dolphin visits are always exhilarating so we thought we’d share this one with you:


Music by Gavin DeGraw
Once we got there we went to clear in and met Anita, whom we’d read about on an article that talked about the day she had to process about 100 passports from the Manhattan Sailing Club Caribbean Regatta. Being former members, the story caught our eye so she was very impressed that we knew all about her and made our check in easy and quick. 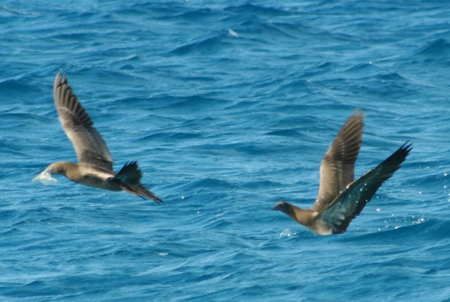 We spent a day visiting the best anchorages on the island and saw Brown Booby birds fighting for their pray at Prickley Pear and after relaxing on the beach for some time, we snorkeled around hundreds of fish by Little Bay. Back to the Virgins
Our final passage before the crossing took us from Anguilla back to the British Virgin Islands and featured two unexpected visits. First a couple of birds that after circling the boat for a few minutes decided to land aboard to take a break. We were probably their only option as there was no land or other boats anywhere close. They looked like city pigeons, which made us think they might have come from very far away. They were either very accustomed to humans or extremely tired because they let us get close enough to touch them before taking flight again. 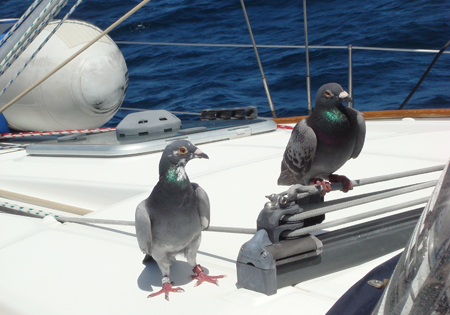 Our next visitor was a cutter from the US Coast Guard. They intercepted us when we were still in international waters and questioned us in that authoritative tone that makes you feel like a material witness on the stand. 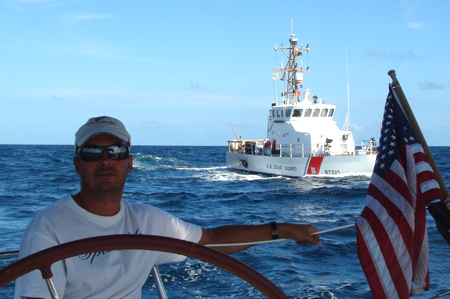 We expected that when entering the waters of Puerto Rico in February or when we sailed the US Virging Islands in March, but not all the way out by the British Virgin Islands. They may have been looking for smugglers or illegal immigrants, which probably travel in the same direction when headed for US waters. But other than the two pigeons that had already left, we’d had no other stowaways on Can Drac so they left us alone and went away in search of more dangerous targets.

Comment by Patricia Ziegler on April 27, 2009 at 5:28pm
thanks for the note. Love the pics. Hope you enjoy all your company. Stay well, stay safe.

Comment by LOLA on April 25, 2009 at 7:16am
Just Great, keep sharing..Angela, your hair is getting so long...you both look happy, and what a wonderful experience...wish I were there.....be safe

Comment by Suky on April 24, 2009 at 7:30pm
oh, brings back great memories of St Martin and especially Anguilla. I think those two pidgeons were from NYC, landing to give you good luck as you prepare to cross the Atlantic. What other explanation could there possibly be? Have a great send off party and keep those pictures and reports coming ! Suky