Getting my head straight 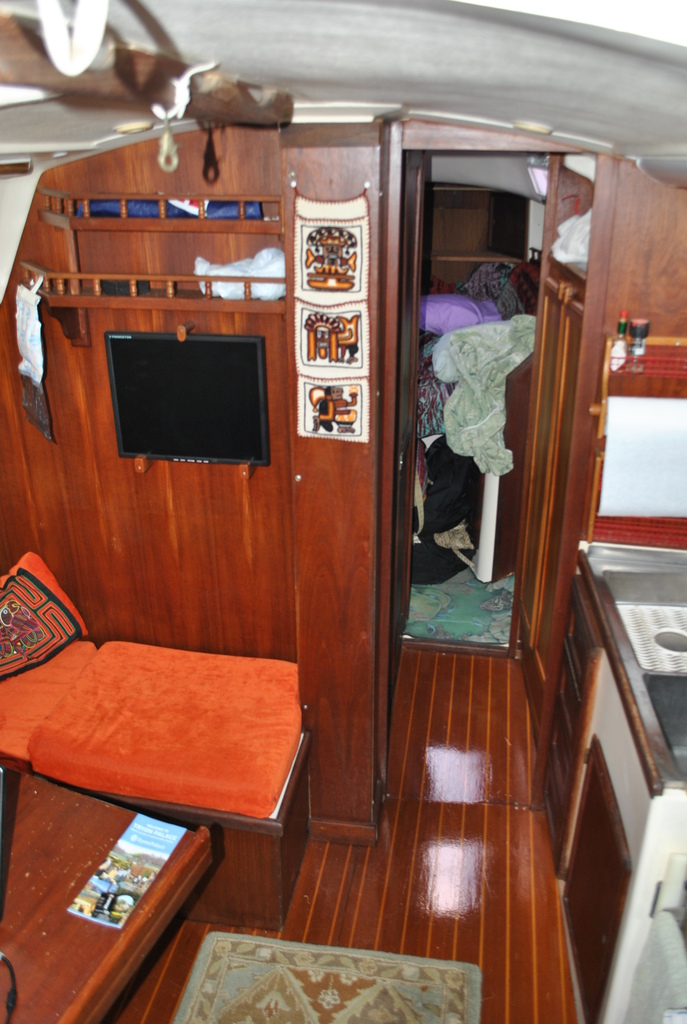 After work on Thursday I drove down to the boat and spent the night.  In the morning I trudged up to the Captain’s Lounge for a shower and then back to the car to stop by the Waffle House for breakfast.  Back to the boat I got busy clearing Marina’s cabin out by pulling her beding and mattresses into the solon.  I removed all the access covers and stuck my head down into the dark and scary recesses beneath the V-berth.  For the life of me I could not find the thru-hull for the raw water intake for the head.  The intake hose runs to the port around the toilet, which faces aft on the port side just abaft of the forward cabin bulkhead.  It then dives through a circular plate and angles back forward like it’s going to lead beneath the cabin sole to the other side.  At that point I can’t see where it goes.  I removed the cabin sole but no luck there.  I pulled the drawers in Marina’s cabin and removed the covers beneath them, but other than finding some future storage space for canned goods, I didn’t find a thru-hull fitting.  I looked beneath the pantry flooring on the starboard side, under the galley sink, and under the stove to no avail.  I finally gave up and just started taking the head plumbing apart figuring that at worst I’d have to jam a wooden plug into the hose to slow the ingress of water and that whatever came aboard would get managed by the bilge pump.

I got the pipe leading to the discharge side unbolted and pulled the joker valve out.  It was not incrusted like I had imagined it would be, however, after rinsing it out in the sink it was clear that it was warped some and was not going to work, even as a spare.  I opened up a toilet repair kit and removed the joker valve, popped it into the pipe, reinstalled the bolts and crimped down moderately.  I then opened up the overboard discharge thru-hull and pumped the toilet clear of the water that was standing in it.  Anxiously I watched to see if it would start filling up again.  I then rotated the flushing valve to pump water in and then twisted it to pump it dry again.  Imagine me dancing in the tiny head for pure joy; toilet repair completed.

Right after I finished my dance there was a knock on the hull.  It was my Rigger, James Bible.  I had called him to make an appointment to do a full inspection of the standing rigging.  On the way up from Florida Marina had spotted a broken wire strand on one of the starboard shrouds for the mizzen mast so I thought that having a pro take a look see might be prudent.  Nothing in the survey, before we bought the boat had indicated that this was a problem, however they didn’t go up the mast to inspect, just did a deck level exam.  James is quite knowledgeable, and his fees are very affordable as well.  We sat down and discussed some of the issues I had such as setting up the furling system and teaching me how to use the spinnaker.  I understand how a spinnaker is supposed to work but I’ve never actually rigged one and felt that having someone experienced show me would be a good course to take.  Twenty years ago I would have been arrogant enough to just bull my way into it.  Old age has mellowed me a bit, so I’m choosing to be a bit more cautious and avoid messing up.

After James left I got out some tools to measure the required bolt length to replace the rub rail screws on the dinghy.  The previous owner had installed the rub rail on it with self tapping wood screws and they presented a health and safety hazard because when we wanted to lift up the boat they would stab our fingers.  Getting the measurement written down I then removed one of the screws to use as a reference when I got to the hardware store.  Before heading out for lunch I gave Hurricane Jack’s a call to see if they had gotten in the 50 amp to 30 amp shore power pigtails in; happily they had.  At $93 they were much cheaper then West Marine so I didn’t groan too much as I poured my money into the hole in the water called “Boat”.  At least now we have shore power again and I can run the computer without fear of running the batteries down.  The solar panels do a pretty good job of keeping the batteries topped off, but I noticed last weekend that the battery charge level dropped a little after a weekend of pretty heavy electrical use what with the refrigerator, laptop, lights, and water pump all running.

After lunch I went to the hardware store and picked up nuts and bolts for the dinghy.  It was so nice outside that I spent some time walking about and stopped and talked with a couple who were outside the hardware store buying plants.  They had just moved into the area and were doing the Spring Planting thing.  Getting back to the boat I put all the stuff back into Marina’s cabin, drank a cup of tea, and just enjoyed relaxing for a bit before getting to work on the dinghy.  I got six of the thirty of screws replace before giving up thinking that I could do this a lot easier with a power tool from home.  Besides, the sun was getting lower and to be honest, I just wanted to take it easy.

I heard Tony from a couple of slips over cursing up a storm so I wandered over to see what the fuss was all about.  Tony is a remarkable fellow who has a passel of boats that he buys, fixes up, and resells.  He also teaches sailing, but today he was having a tuff time with his head sail furling system.  It seemed that the sail maker had put the sail cover panel on the wrong side of the sail so when it was rolled up on the furler it was on the inside rather than on the outside where it belonged.  Steve, the TV engineer from the end of the dock, was helping him out, but it was just not Tony’s day.  So I wished them well and went back to my boat to put some more stuff away.