A four day weekend is just what I needed.  I turned in my data to my tax accountant last week and the relief of getting that behind me was ecstasy.  At any rate Marina, Josh and I drove down to New Bern and over to the Bridgeton Harbor Marina to select a slip, then we drove one of the cars back to our old marina to check out and get the boat underway.  We stopped first to have lunch at Persimmons for.  The food was great and we had a good time talking as we looked out at the rain through the windows.  It was cold and windy as we backed out of our berth and called the bridge to ask them to raise the span so that we might pass beneath to the river.   Motoring past the buoy just after clearing the bridge we turned to port and headed up river past Union Point until Red 38 came close aboard.  The wind was making long white streaks in the water and blowing spray into our cockpit as we crossed the river to the new marina.  Once inside we had some difficulty getting into the slip because of the winds, so I backed out with the kids fending us off the piles.  Making another run at it we headed back in but into another slip and portside to.  That was much easier and with a bit of frantic effort we got the mooring lines shifted and the boat tied up proper.

Marina and Josh drove back to Bridgepoint to collect the other car.  I got busy stowing gear and getting things shipshape in my cabin before walking up to the Captain’s lounge to look around and use the head.  Bridgeton Harbor Marina has a fine lounge with books, ice, free laundry, five large clean showers and a big screen TV.  I was having such a good time meeting new neighbors and learning about up and coming art festival to be held at the marina that my daughter had to call me to get back to the boat for supper.

We couldn’t get the shore power straight for some reason, so after a while I bid the kids good night and headed for my bunk.  The next morning started clear but chilly.  Marina whipped up hash browns and beacon for breakfast.  We decided to back the boat in so that Marina could have easier access to the stern to remove the boat’s old name and paint the new one.  Of course, the wind and my inexperience with the boat made my efforts to back the boat into the slip a real comedy, but thanks to a number of helpful dock watchers, I got the boat backed in and tied up with the stern just a few feet from the dock.  With that done we walked over to Hurricane Jacks and bought the sailing dinghy that I’d put a down payment on last week along with a ships bell and another fender.  Ed, the manager of the store helped us out by loading the dinghy on a trailer and then drove it over to a place where we could launch it into the river.  I haven’t rowed a small boat for 20 years and I’m not in great physical shape any more so about half way Marina had to take over.  Now she has never rowed a small boat so it was pretty comical until she got the hang of it.  The oar locks were coming loose but we made it never the less.  With Josh’s help we pulled the boat out onto the dock and tied it down.

Marina and Josh put up a set of decretive solar lights around the cockpit cover and that night we enjoyed the gentle pastel glow on deck as we drank our Yoo-Hoo after supper.  The next day we got a lot of complements on lights from fellow dock -mates.   That evening the kids left for home as Marina had work on Sunday.  I ate part of a sandwich for supper and had a Yoo-Hoo to wash it down.  After supper I plugged in the laptop to the inverter and watched a couple of episodes of 24, then off to bed.

Sunday came in cool but sunny so I drove over to the shopping center in New Bern and had breakfast at IHOP, and then drove over to West Marine to get bolts, washers and nuts to repair the oar lock brackets.  Back at the boat I relaxed a bit in the cockpit and visited with Steve, an engineer at the local TV station and with Penny and her husband as they were getting ready to get underway heading south to warmer waters.  I dragged the dinghy up to a wider spot on the dock, spread a bit of canvas to catch anything I might drop while I fixed the oar locks and got busy with the repair.  Boat life is all about fixing things interspaced with the joys of sailing, exploring, and meeting the wonderful folks who share the same interest in life on the water.

Monday broke bright and sunny again so I walked up to the lounge and took a shower, etc.  On the way back I talked with Tom, the dock master, about the GFI problem I was having.  A couple days earlier I had arranged for Don, a boat systems expert, about taking a look at my shore power issues, but I didn’t know which boat he was on.  Tom couldn’t think of it either, but said he would come down and take a look at 10 AM.  It was a little after eight so I said I’d meet him then but that I was going to eat breakfast first.  I headed over to the Waffle House, had breakfast, and then back to the boat.  A little after 10 Don showed up with his tool bag in hand and got right to work checking things out.  Three hours later, very frustrated, he gave up and said he couldn’t find the problem, but he thought it might be that the currents in the harbor might have something to do with it along with the fact that the power source that I was attempting to use was not rated for shore power.  We spent some time discussing another project next weekend and even though I offered him money for his time he refused, saying if he couldn’t get results then he didn’t want to take anything for it.

I got a call from James Bible, a fellow who will check the rigging next Friday, and we settled on a price for that work.  Marina had noticed a broken wire strand on one of the starboard mizzen shrouds on the way up from Florida, something we missed during the survey and sea trials, so having someone go to the top of the masts and doing a more in depth look-see seemed like a good thing.  I had anticipated redoing all the rigging, sails, and running rigging before heading to the Caribbean anyhow so having a list of things to start with makes sense to me.  I packed up my stuff, stowed gear, shut down the electrical panel, and locked up the boat.  I looked like a pack mule with my gym bag, laptop bag, a pair of jeans with the legs tied and stuffed with dirty cloths and cookware, along with two bag of trash as I trudged up the dock to the car.  The drive home was eased by listening to a audio book and I soon pulled into my drive after picking up the mail from the box.  Good weekend. 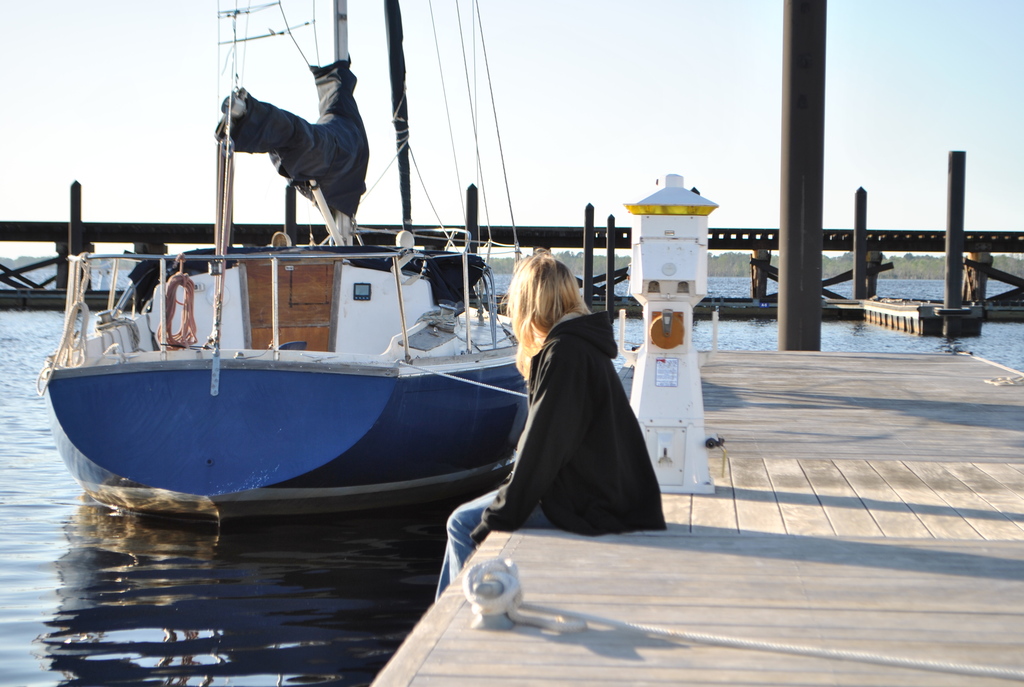