Barbuda, Antigua and the turnaround point 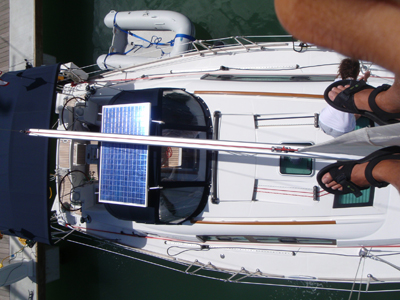 After a week in Antigua and Barbuda we are finally headed North!

Ever since we left New York we’ve been charting a course leading us South East. That is, directly into the wind, which as you know, is the one thing sailboats hate to do. Antigua was at the end of that road for us.

From the BVI to Antigua, our last passage South East

After our previous guests left us we spent a few lazy days in the North Sound of Virging Gorda in the company of our friend Mark Hill of the “Down Island” novel fame.

It was there that we also enjoyed the company of one of the most remarkable sailboats in the world today: the Maltese Falcon. With three impressive masts and a sail configuration reminiscent of the pirate ships of yore it was certainly a sight to see in the contemporary Virgin Islands. As we waited for weather we also took the time to explore Sir Richard Branson’s new purchase: Moskito island, with its unspoiled beaches and peaceful corners. There, Andrea could not contain her creativity and decided to leave a masterpiece behind. I guess this takes the place of any snow men we could have built up back home! We sailed down island as soon as the weather allowed and took the time to spend a day anchored in St Barts for Franc’s birthday. It was another great yellow flag day, like Valentine’s Day in the Turks & Caicos. Yellow flag days are those we spend in transit between countries, wearing the Q flag signaling that the boat is in quarantine until we clear into a country. They are sort of like days spent outside “the system” because even if we are in the territorial waters of one of the islands we can’t leave the boat unless we are going to clear in. Sometimes it isn’t worth it just for a day so we just stay aboard and swim off the boat. Those are the days when Can Drac is our only country and the two of us its only citizens.

The Crown Princess and the fish in the face 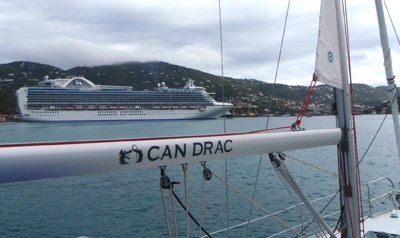 Crossing paths with the Crown Princess reminded us of what we were thinking when we sailed these same waters on that same cruise ship last Spring. Looking out to the dark ocean from the safety of our cabin’s balcony we pictured ourselves in our little sailboat, slowly making headway towards the destination of our choosing. Now looking back at the exact same cabin from the cockpit of our boat feels very gratifying.

The only incident on this passage was actually more funny than scary. 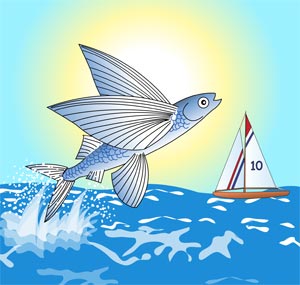 When you sail at night in these waters it’s not uncommon to receive the unannounced visit of a flying fish or two on deck. Well, this passage had the largest flying fish we’ve seen so far. And we had plenty of time to contemplate the foot-long one that landed in the middle of our cockpit sending Andrea for cover down below. But it was the second visitor that really hurt when it hit Franc smack in the face while standing behind the wheel. It felt like an invisible punch in the face leaving a terrible fishy smell behind!

Back in port
When we reached Antigua we had plenty of time to recover from our night sail and prepare the boat for our next guests in the comfort of Jolly Harbour Marina. Boat projects got taken care of, including trips up the mast to fix the radar reflector, and we were able to go back online, sleep in perfect still waters and even watch cable TV! 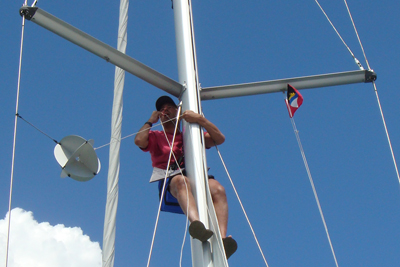 Our guests Jeff and Linda, from S/V Daisy Mae joined us for a few days exploring both Antigua and Barbuda, the island 25 miles to the North of Antigua. 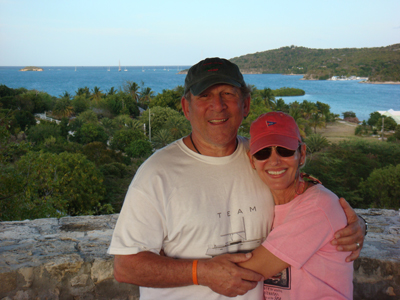 We started the week by following the recommendation we got from Iris, the dock master at our home marina and went up to Shirley Heights, an old lookout spot from the days when Nelson’s ships dominated the harbors. The place has a perfect view of the famous English and Falmouth harbors and great live music all night on Sundays. 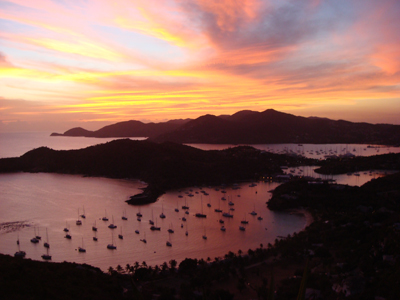 It also had the largest crowd we had seen in weeks! 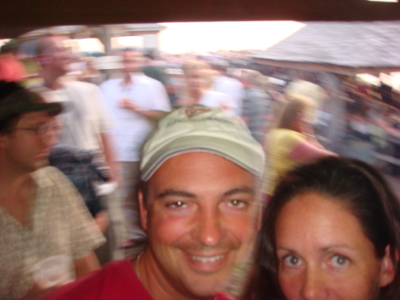 This was also a special Sunday, as we learned on our way up the hill. Crowds were filling the streets in celebration of their party’s victory in the election. Music was playing loud out of car stereos and people were all dressed in the colors of the party. They all looked like fans of a local sports team celebrating a championship victory. It was great to see democracy celebrated in such a big way, especially knowing that by then, the election had been won for over a week! 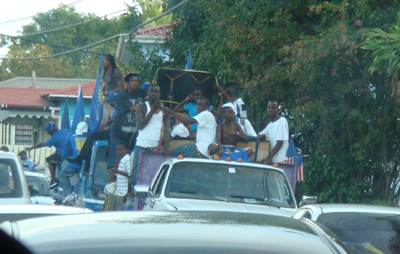 After a pleasant day sail North to Barbuda we took some time to explore the long unspoiled pink beaches of this remote island. Jeff and Linda took the island tour, visiting the bird sanctuary on the North side while we moved the boat to our next anchorage. At the end of the day we convinced the local fishermen to get us some fresh dinner and we ended up with seven live lobsters in the cockpit. Cooking them in the grill was a memorable experience and sharing them amongst the four of us definitely satiated our appetite for seafood for a while. The next day, on our way back, we were blessed with the best fishing we’ve had in a while. We kept pulling in mackerel after mackerel until our biggest catch got murdered by a predator. 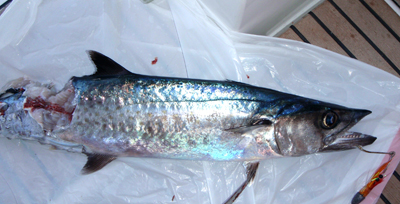 As Jeff was reeling it in he felt the strong pull weaken and when we got the fish aboard we noticed its tail had been snatched away by a shark. Oh well, I guess we can now say we are sharing our meals with the local creatures of the sea! 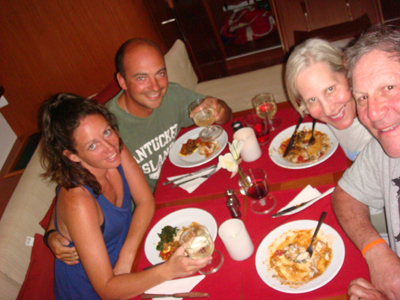 Back in Antigua we visited its famous harbors and coves, snorkeled and tasted the local foods. Check out this video for a visual summary of the week:


Find more videos like this on SeaKnots
Finally, on Saturday, as we rounded the South side of Antigua we made the final turn North. From now on we’re headed back towards Tortola in the BVI where we’ll start the Atlantic crossing in May. On the way there we’ll be hosting family and plan on hitting the islands we skipped on the way down like Nevis, St Martin and Anguilla.

Stay tuned to our upcoming adventures and don’t forget to make a donation at Sailforwater.com

Comment by CruisingEditor on April 13, 2009 at 6:26pm
Any chance you're headed back to Antigua for Sailing Week? I just found out that i'm going!

Comment by Marsha Knight Gayle on April 12, 2009 at 9:21pm
I am so excited for you guys - look like you are having an amazing time (I am jealous). I miss you both and HOPE I can catch up with you before the end of this fabulous journey!!!!