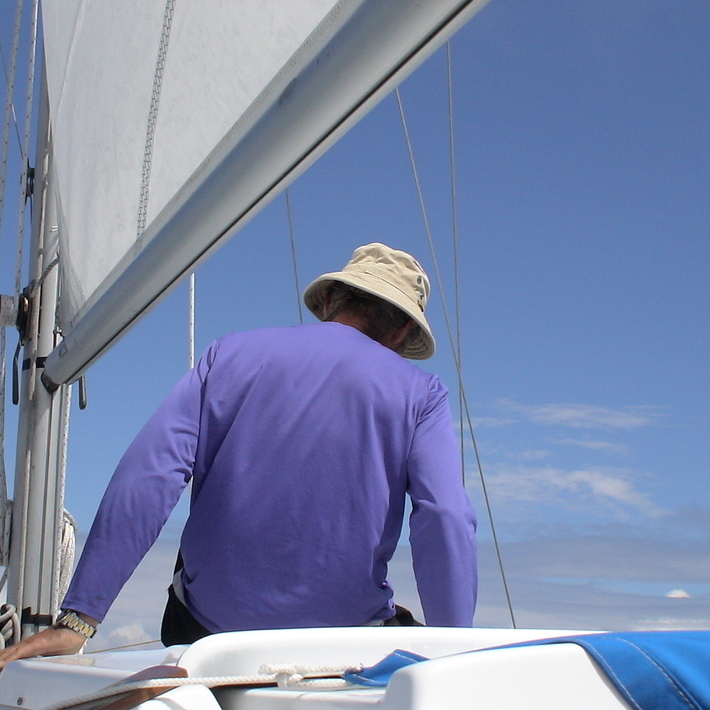 Orvil Newton has not received any gifts yet

Of course it all started many, many years ago for me. I can’t really remember exactly when I got the bug but it probably dates to the early 1960’s. The credit (Or blame, as it were) has to go to Gardner McKay and his television show, “Adventures in Paradise”. If you never saw the show you missed a real treat. Gardner played Captain Adam Troy of the 82 foot schooner “Tiki”. The plot was, basically, just him sailing around the South Pacific in search of cargo, passengers and adventure. Many years later, in about 1990, I had the good fortune to meet Gardner McKay in Hawaii. It seems that we have a common interest, sea kayaking, and, I discovered, a few mutual friends. Gardner is a fascinating man and I have a couple of great stories involving him. Buy me a couple of beers the next time we’re in port and I’ll tell you all about it.

Cruising the Pacific in my own boat remained just a dream while I finished growing up and stayed on the back burner through my fifteen-year career in the US Army. Then, while recovering from knee surgery at Tripler Army Medical Center in Hawaii, I noticed the boats out on the ocean and I remembered the dream. I had time on my hands and access to a library so I started reading. I devoured Hiscock, the Pardeys, Tristan Jones, Joshua Slocum and anything else about cruising I could get my hands on. I resolved to own a forty foot ketch someday and to go cruising just like Captain Adam Troy.

Life went on, as it tends to do when you’re not paying attention. Fast forward to 1990. Now out of the Army for ten years and with a good job in Honolulu, I started looking for a boat. I had a small inheritance but not enough for a forty foot ketch in seaworthy condition. A friend of my boss got tired of listening to me talk about my dream of sailing and said to me one day “Why don’t you buy my boat?”. “What kind of boat is it.” I asked. “An Albin Vega 27” was the answer and the price was just right for my budget. “But it’s too small.” I complained. “Nonsense!” he replied. He was right. I moved aboard on April 1st 1990 and found the hoard of VODCA Newsletters stashed in the locker under the forward bunk. I dashed off a check to Sid Rosen. (NOTE: Sid was editor of the American Vega Association newsletter. I took over in 2000 and am now the AVA site webmaster)

Now that I had the boat, the dream became a goal. I began developing a plan to achieve it. The plan has changed over the years but, surprisingly, not much:

I initially decided that I needed $100,000 but increased that when Laura joined the crew. I figured that about $10,000 a year would be enough with no recurring bills to pay. Although my job provided a very good profit sharing plan, I learned all I could about investing and put away every penny I could scrape together.

Meanwhile, I made a list of everything that needed to be done to the boat and all the gear I would need. While toiling at my job earning the money I needed, I worked on crossing off items on the list.

I admit I have been remiss in visiting here and keeping up with the blog etc.  We have, however, been busy sailing from San Francisco to Hawaii, then volunteering with the TransPac Hosts (Waikiki Yacht Club), then updating our own web site and YouTube Channel.  At the moment, sipping a cold beer behind the Ala Wai fuel dock in Honolulu, watching the outrigger canoe paddlers practice. The boat… Continue

Apologies for not keeping up this blog. The video we posted yesterday is from our first attempt to sail down the coast from the straight. After that weather broke we high tailed it into Neah Bay...

To bring everyone up to date: We departed Neah Bay, along with six other southbound sail boats when the weather turned, and resumed our original course offshore where we sailed a reach in brisk winds and fairly large seas. All went well until Laura suffered a severe asthma attack. We were… Continue

We departed Port Angeles at 07:20 on Tuesday, September 22 under overcast skies with good visibility. The forecast was for wind 15 to 25 knots from the SW off Cape Flattery. We neglected to consult the long range forecast. Our mistake, and, later, we paid for it.

We reached the red J buoy at the entrance to the strait at sundown, shut down the engine, hoisted the genoa and mainsail, and sailed on a course of 240 degrees true, making as much southing as we could in the… Continue

After picking up our crew for the trip down the coast in Friday Harbor we returned to Port Townsend for final provisioning. Generally foggy conditions in the strait deteriorated into very low visibility and kept us in Port Townsend an extra day.

We left Port Townsend at 12:20 on Wednesday as the fog lifted but as we motored westward in the Strait of Juan de Fuca the fog closed in again and we found ourselves proceeding in one mile visibility for most of the thirty six miles to Port… Continue

LOLA said…
Great recent videos..and I might add like the Bree touch at the end better than old ending

Melissa Renee said…
Thank you for sharing your voyage across the Pacific. I enjoyed them very much. Good luck the repairs. Look forward to your next cast off.
Fair Winds
Melissa

Terri said…
You're welcome! I really enjoyed them also. Could have watched for hours. Learned alot from watching, hopefully others will enjoy also.

CAN DRAC said…
LOL! That comment on our video was really funny!

About Me:
Lived in Hawaii for thirty years. Sailed away Summer 2007. Currently cruising the Pacific Northwest (BBX wireless available almost everywhere up here)

Looking to:
Alaska, Monterrey, San Diego, Mexico, French Polynesia and the Pacific circuit, NZ, OZ and where ever the wind blows.